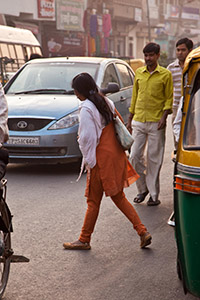 Srishti, a 20-year-old Delhi student, says she carries pepper spray to protect herself when she goes out. Photo Credit: UN Women/Gaganjit Singh

The United States, through the U.S. Agency for International Development (USAID), has announced a $250,000 grant to UN Women's Global Safe Cities Initiative. The grant is for the ongoing programme, "Delhi Safe City - Free of Violence against Women and Girls," that will be implemented in partnership with Indian civil society organisations.

This announcement comes in the same month as the International Day of the Girl Child and on the eve of the international community's 16 Days of Activism against Gender-Based Violence beginning late November.

U.S. Ambassador to India Nancy J. Powell said, "The United States recognises gender-based violence as one of the most debilitating factors impeding a woman's active participation in any economy in the world and her ability to access resources and services. We are pleased to partner with UN Women to help promote safe cities and reduce gender-based violence, which plagues every country in the world."

Working with local urban civic planning, public transport, education, urban infrastructure authorities, and civil society, the Delhi Safe City programme focuses on increasing safety among women and girls. It works to help prevent and reduce violence, including sexual harassment, in public spaces. The programme encourages municipalities and their partners to take action, such as improving lighting on streets and designing new public safety plans that focus on women and girls. It engages men and boys as critical partners in preventing violence, and partners with schools and colleges to create awareness and to organise campaigns for safer cities for women and girls.

Dr. Rebecca Tavares, the UN Women Representative for India, Bhutan, Maldives and Sri Lanka, welcomed the grant saying, "Such a grant will go a long way towards ensuring women's right to the city and the right to be free of fear. The Safe Cities programme is working towards creating a greater sense of safety and increased comfort of women and girls in public spaces.  By changing mindsets and improving urban infrastructure, we can surely turn the tide. Violence against women is preventable and not inevitable."

New Delhi also gave visibility to ongoing efforts, such as its community safety audits as well as public information campaigns and surveys on safety in public spaces. In addition, a workshop on using Information and Communication Technologies was held, with participation from government, police, civil society, the private sector donors, men and boys groups, youth groups and experts. The Deputy Commissioner of Police, Special Police Unit for Women and Children, Ms. Suman Nalwa, spoke about the increased willingness and sensitivity of the Delhi police to promptly deal with cases of violence against women. The developers of three safety applications – Microsoft’s Guardian, Safetipin and Harassmap-Mumbai – also demonstrated their applications and took questions from the audience.

The Safe Cities campaign is a global initiative to make cities safer for women and girls. In India, UN Women, Ministry of Women and Child Development and Jagori have collaborated to implement the campaign in five cities across India in Delhi, Mumbai, Bangalore, Hyderabad and Pune. The safety audit was conducted in Delhi as part of the campaign to document public spaces that contribute towards creating safety or vulnerability for women and girls. Poorly lit streets in bus stands, auto rickshaw stands, subways, broken down footpaths and lack of public toilets were some of the main concerns raised by women during these audits. The survey, along with women safety audits and the Safe Cities Strategic Framework will guide the work to make Delhi safer for women and girls.