The establishment of a 24-hour help line by the Samoa Victim Support Group (SVSG) in April 2013 has made a difference in the Pacific island State of Samoa. Not only has it improved access to counselling for survivors of violence against women in Samoa and encouraged witnesses to speak out, but it has also saved lives. 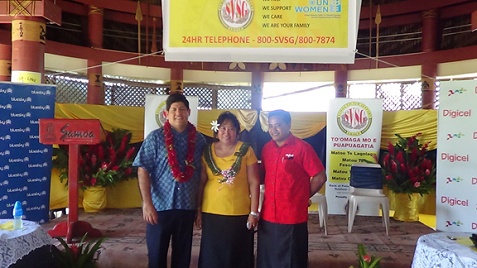 Lina Chang, President of Samoa Victim Support Group (centre), is flanked by representatives of two telecommunications companies, BlueSky and Digicel, at the launch of the help-line in April 2013. Photo: SVSG

With a population of just 187,820 according to the latest Census data from 2011, and with nearly half of all women reporting having suffered intimate partner violence,[1] the demand for the help line is evident in Samoa.

In the first five months since it was launched in April, the service has answered more than 1764calls, 83 of which were life-threatening domestic violence cases requiring overnight shelter assistance, immediate evacuation of the women survivors and their children, and referral to the Police Domestic Violence Unit, as well as counselling and mediation assistance at the SVSG office.

Most calls are handled through on-line counselling, assistance and referral to SVSG village representatives closer to the location of the caller. Callers have ranged in age from 14 to 80.On the Samoan island of Savaii, after a caller recently reported a rape, SVSG alerted its village representative immediately, who is now working on the case with the police.

Since the inception of the help line, community awareness and involvement in ending violence against women has increased substantially. People have called as witnesses to alleged crimes and have provided supporting evidence including videos and texts. This information, collected in homes, by the roadside, schools and public places, is vitally important when a case is tried in the judicial system.

The help line has also been instrumental in alleviating the frustrations of parents, husbands and partners who are looking for someone to talk to about their problems. This group comprises 65 per cent of the helpline’s callers, a testimony to the fact that Samoans increasingly want to ‘speak out’ and seek assistance.

Some say the fact that trained specialists can counsel suicidal clients and domestic violence survivors at night, when most of these incidents occur, has also been instrumental to its success. SVSG also credits the media with spreading the word about the 24-Hour Help Line. At the launch in April 2013, when Prime Minister Tuilaepa Aiono Sailele Malielegaoi asked for help informing the public, an influx of calls came through, encouraged by media reports.

“The positive use of the media, coupled with your 24-hour Help Line peopled by trained and committed staff, is a breakthrough for ending violence against women in Samoa,” UN Women Country Programme Coordinator Suisala Mele Maualaivao also noted.

Calls have sometimes included requests for other services, such as disability and home care assistance. Response includes the distribution of wheelchairs and general welfare support such as clothing and food. In one case, a village representative called in on behalf of a woman who is speech-impaired and she reported four cases of abuse against people with disabilities.

The 24-Hour Help Line service was supported by two private communication companies, Bluesky Samoa and Digicel Samoa, and is part of a two-year project sponsored by the UN Women Pacific Regional Ending Violence against Women Facility Fund. The Fund is supported by  AusAID and National Committees of UN Women in Australia and New Zealand.

[1] In 2005, Samoa was the first country selected in the Pacific region to complete a study on women’s health and domestic violence which culminated in the publication of the Samoa Family Health and Safety Study (2007). This study, which provided the first-ever picture of the prevalence of violence against women in Samoa, found that 46.4 per cent of women between the age of 15 and 49 years who had ever entered a relationship, reported experiencing physical and/or emotional and/or sexual violence, by an intimate partner. http://www.spc.int/hdp/index.php?option=com_docman&task=cat_view&gid=41&Itemid=44