Across the Pacific, crisis centres respond to COVID-19 amid natural disasters

Gender-based violence crisis centres from six countries in the Pacific have faced not only the COVID-19 crisis, but also in some countries, the dual impact of a tropical cyclone. UN Women’s Ending Violence Against Women and Girls, through the Pacific Partnership, programme works in close collaboration with government, civil society organisations, communities and other partners to promote gender equality, prevent violence against women and girls, and increase access to quality response services for survivors, especially during emergencies. 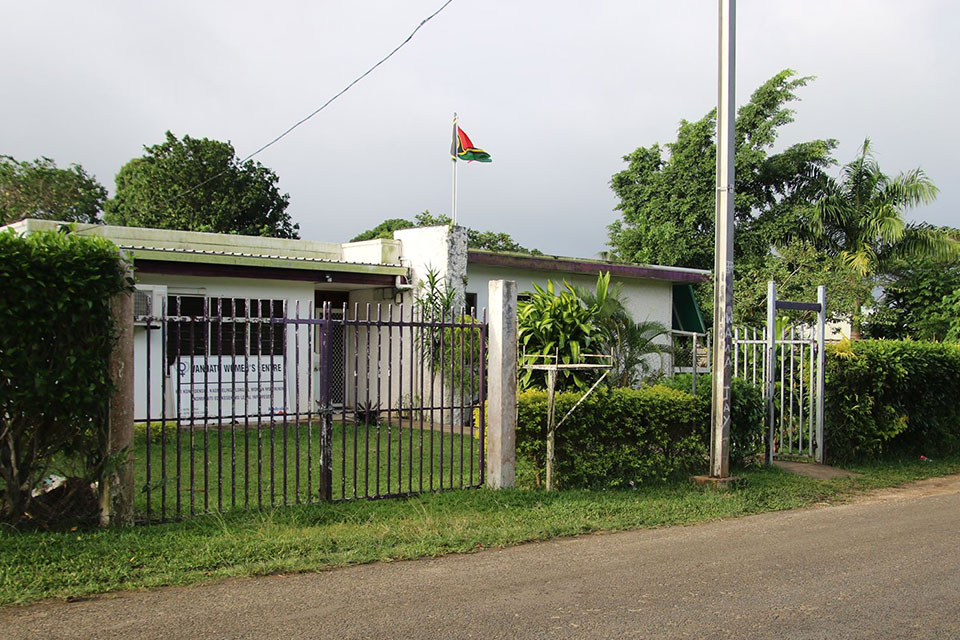 As COVID-19 made headlines back in January, crisis centres in the Pacific started preparing themselves for its possible implications, should it reach their shores. Having experienced multiple natural disasters and emergencies over the years, they knew that the rates and severity of domestic violence escalate during crises, often coupled with disruptions to critical support services.

For the six crisis centres in Fiji, Tonga, Vanuatu, Solomon Islands, Kiribati and Samoa, the safety of survivors and staff was paramount, and all centres surged into preparedness and response mode. As early as January, the Fiji Women’s Crisis Centre (FWCC) and the Women and Children’s Crisis Centre (WCCC) in Tonga cancelled all staff travel and followed the news closely, strategizing and putting plans in place.

When the World Health Organization (WHO) declared the global pandemic on 11 March, both the Fiji and Tonga crisis centres began intensively promoting their helpline numbers on radio, television and social media, with the Tonga centre piloting online counselling for the first time in their country.

Both the Fiji and Tonga centres started providing phone counselling from home. “This took some getting used to,” says Centre Coordinator Shamima Ali from Fiji, as “being with the survivor face-to-face was part-and-parcel of gender-based violence response.”

As a result of concerted advocacy, both the Fiji and Tonga centres were deemed essential services – an important recognition from governments that survivors of gender-based violence also need critical services during lockdowns – and that meant they would continue to offer these services during the lockdown.

Amid COVID-19 prevention measures, the number of women seeking help for domestic violence support services surged. In Fiji, for example, the national domestic violence helpline recorded a significant increase in calls in the month of April (around 527), compared to 87 in February and 187 in March.

“Close to 50 per cent of women are reporting a correlation between COVID-19 and increased violence, linked directly to the restrictions of movement and economic strain on families,” said Fiji’s Minister for Women, Children and Poverty Alleviation (MWCPA), Hon. Mereseini Vuniwaqa, in a joint press release with FWCC, Medical Services Pacific and the UN Women Fiji Multi-Country Office. “The domestic violence being reported is serious – close to three-quarters of women reported physical violence, including some extremely serious forms of violence, such as being punched, kicked and hit by stones and timber.”

The cases of violence coming in, says Ali, are both from existing clients, where the levels of violence have increased, as well as new clients. “There is so much coercive control faced by women from their partners. Controlling all her movements, checking if she is in the house. There is just no respite for women and I really fear for mental health issues.”

In Samoa, there has been a 150 per cent increase in helpline calls compared to the same time last year.

“Families were fighting over the rationing of food; neighbours were stealing from each other’s plantations; domestic violence was rife as couples were forced to stay in close proximity to each other during lockdown, and with the daily struggle for food and other necessities, stress and anger were the usual triggers of violence,” says Silliniu Lina Chang, President of the Samoa Victim Support Group.

In Tonga, the women’s crisis centre sought to track the impact of the lockdown on survivors, recording a 54 per cent increase in the number of cases coming in during that period. Tracking continues post-lockdown as the true magnitude of the violence is only just emerging.

“Women are saying the lockdown was a living hell for them,” said ‘Ofa Guttenbeil-Likiliki, Director of the WCCC. “We are now looking at the safest way we can collect data in terms of women’s experiences during the 15-day lockdown, to get a better sense of the impact. We have read up on different ways that data has been collected globally and have resources that UN Women has shared.” 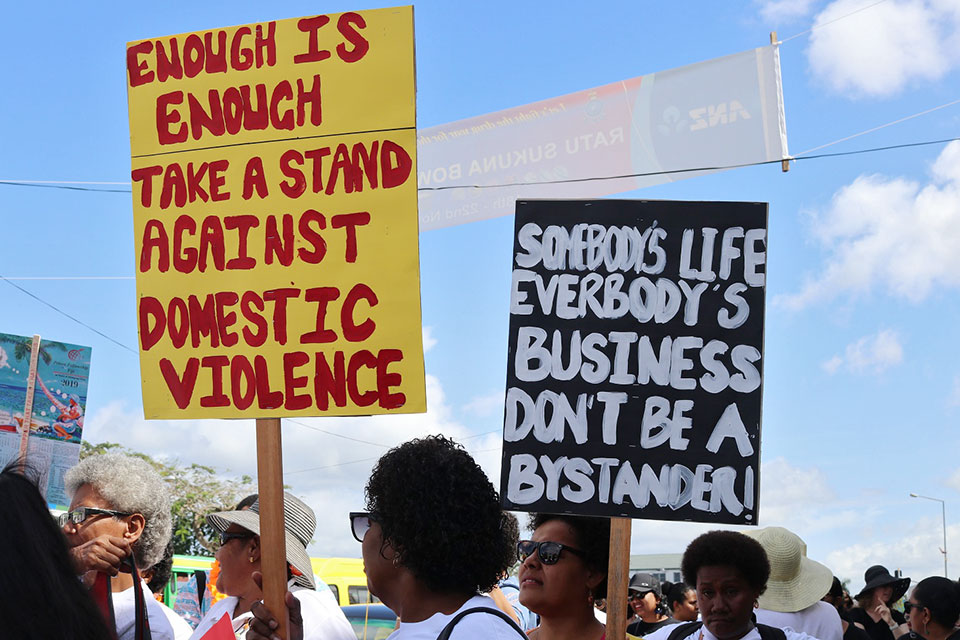 UN Women Ending Violence Against Women and Girls Programme Specialist Abigail Erikson says the Fiji Multi-Country Office in the Pacific works in close collaboration with governments, civil society organisations, and communities to address violence against women and girls, which is one of the leading public health crisis and human rights violations against women and girls, even prior to COVID-19.

The Solomon Islands Family Support Centre (FSC) and the Kiribati Women and Children Support Centre (KWCSC) are also working to ensure that women are part of all national safety plans. Centre Coordinator Teretia Tokam said despite there being “no confirmed cases of COVID-19 in Kiribati yet, the Centre is preparing a plan for its service delivery during lockdowns and is advocating that our services are deemed essential.”

Dual impact of a tropical cyclone 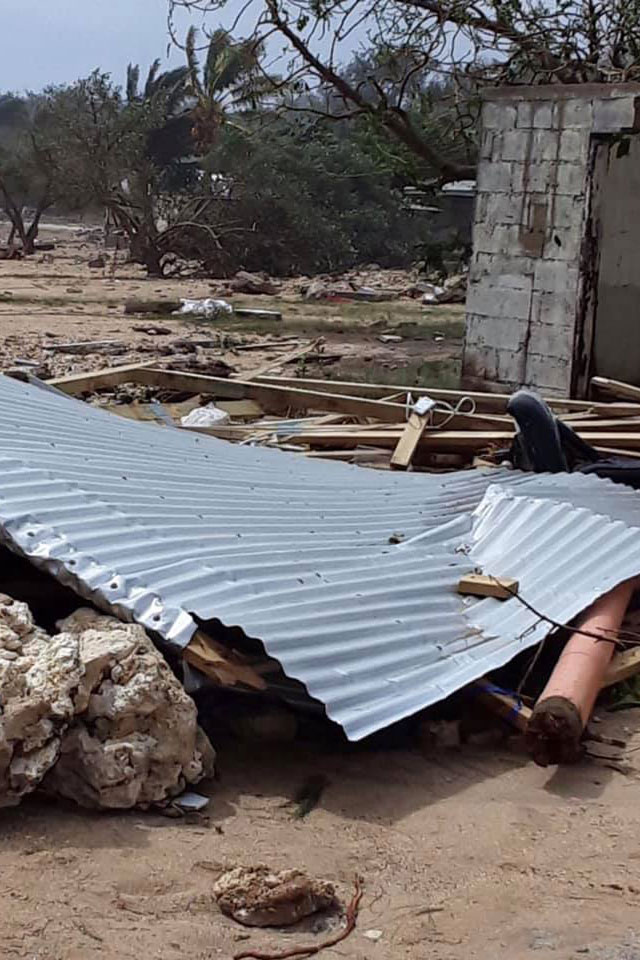 In Tonga, one of centres’ branches on the island of ‘Eua was destroyed by Category 5 Tropical Cyclone Harold in April 2020. Photo: ‘Ofa Guttenbeil-Likiliki .

The Pacific has largely been spared by COVID-19’s health impacts, relative to other regions around the world – with Fiji hardest hit of the six countries UN Women’s EVAWG programme works in, at 18 confirmed cases – all of which has since been cleared. But the region was still dealing with the pandemic in April, when four countries – Solomon Islands, Fiji, Tonga and Vanuatu – were hit by Tropical Cyclone Harold, which devasted parts of each country. TC Harold reached Category 5 status by the time it made landfall in Vanuatu, causing severe destruction.

In Tonga, one of centres’ branches on the island of ‘Eua was destroyed, and while the six centres run by the Vanuatu Women’s Centre (VWC) in the different provinces in Vanuatu were still standing, their surroundings were affected, as were the people in the communities.

Vanuatu Women’s Centre Coordinator Merilyn Tahi says: “It has been hard with COVID-19 and cyclone at the same time, but through support from UN Women, we were able to quickly organize mobile counselling visits – where we made 30 physical visits to three areas – Malampa, Sanma and Pentecost. At the moment, women in the in the cyclone-affected areas are not talking specifically about violence because they are more concerned about survival.”

Those calling in on the helpline and physically visiting the centres are, however, reporting domestic violence, sexual abuse and incest and Tahi believes women will start sharing more once their basic needs are met.

Despite crisis centres’ efforts to address violence against women and girls, key challenges remain to varying degrees in all countries. Slow response or no response from police and the judiciary, insufficient prioritization of health care for survivors (including mental health), non-inclusion of women and girls in response plans and lack of coordination remain barriers in many places across the Pacific.

UN Women’s Erikson says: “This is why for us at UN Women, its essential that we work alongside and support national governments and crisis centers, as they lead the way in ensuring women are included in national response plans and coordination. It is great to see that in Fiji and Tonga, the crisis centres are deemed essential services – we hope this becomes standard for all countries.”

According to Silliniu Lina Chang, President of the Samoa Victim Support Group: “COVID-19 has presented us and our blue Pacific family with a rare opportunity – a time for all of us to reset. Think outside of our comfort zone and look beyond to the neighbour that is in need.”

Related News
07/08/2012
UN Women Convenes Consultations on Eliminating and Preventing Violence against Women and Girls in Fiji and Six Other Pacific Islands States
11/06/2020
Across the Pacific region, crisis centres respond to increased cases of violence against women amid COVID-19
11/06/2020
Early preparations and data-gathering mark responses to COVID-19 in Fiji and Tonga
06/09/2019
National support for better counselling and support for domestic violence victims
18/07/2019
REACHing out for rights and services
END_OF_DOCUMENT_TOKEN_TO_BE_REPLACED