REACHing out for rights and services

An unexpected visit sparked a glimmer of hope during a dark time in Arihi’s life. She is now an empowered survivor of domestic violence who now knows her rights and how to access financial and legal services.

Arihi – not her real name – is a single mother of three young children living in a remote community in the Kingdom of Tonga. She experienced domestic violence at the hands of her former husband and, after divorcing him, she remained wary of his abusive nature and proximity while working hard to earn enough to support and raise their children. 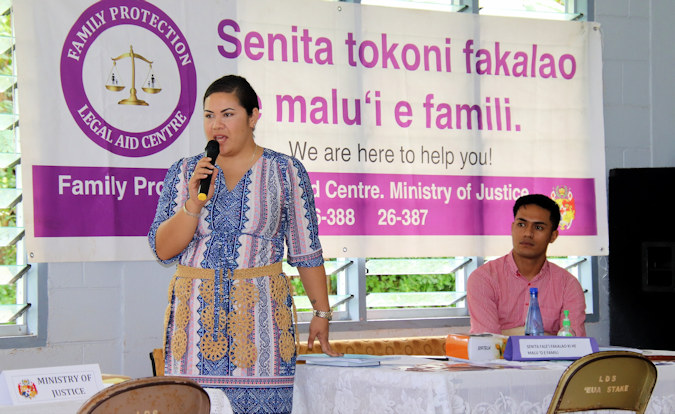 During the REACH mobile awareness raising and service delivery the Tonga Family Protection Legal Aid Centre spoke with members of the communities on legal rights of citizens and legal services that the Legal Aid can offer. Photo: Courtesy of Richard Nath

It was a difficult time. Arihi, her parents, and her siblings, had felt extremely uncertain about how to improve the situation until an unexpected visit occurred to her rural community by officers from the Tonga Family Protection Legal Aid Centre.

The Legal Aid officers spoke with Arihi and other members of the community on legal rights of citizens and legal services that the Legal Aid can offer. It was an opportunity for Arihi to share with the officers the dire situation she was facing. She was able to learn about her legal rights and specific legal actions she could take. Based on the knowledge she gained, she decided that legal action was the best way to deal with her situation, for both herself and her children. The experience was an eye-opener for her.

The visit by the Legal Aid officers was part of a ‘mobile awareness raising and service delivery’ initiative conducted by various government agencies as a ‘mobile team’. The REACH initiative has piloted its mobile service delivery approach in Tonga and Samoa led by the respective governments with financial and technical support from UN Women and the United Nations Development Programme (UNDP).

In Tonga, its REACH team of government services travelled village by village in remote areas, and explained to the communities the social, economic and legal rights of citizens of Tonga, and provided personalized services on a case by case basis.

During the 10 days of ‘mobile awareness raising and service delivery’ in Tonga, 2,715 services were provided individually (1,683 to women, 1005 to men, 23 to children and four to persons with disabilities) in 17 communities in Tongatapu and ‘Eua Islands. The pilot is also extending to identified remote areas in Ha’apai and Vava’u starting in July, for several months.

Arihi is one of hundreds of gender-based violence survivors assisted by the Tonga Family Protection Legal Aid Center over the past year of which nine in every 10 are women – 93 per cent of the 268 survivors supported were women seeking legal advice, or legal assistance including representation in court, for themselves and sometimes also their children.

“The Tonga Family Protection Legal Aid Centre is dedicated to providing free legal aid services to survivors of domestic and gender-based violence that includes women, men and children,” said the Centre’s Director Ms. Fitilagi Faanunu, adding “we work closely with the police, crisis centres, the Ministry of Health, the Courts as well as other agencies who are part of the referral network.”

A staggering 75 percent of women survivors never sought help from formal services or people in authority according to the study. If they sought help, it was usually when the violence was so severe it was reported via hospital and health services (12 percent), police (12 percent), or religious leaders (8 percent).

The study further identified that social networks surrounding women often reinforce a stigma of shame around gender-based violence with ‘social norms’ often incorrectly blaming the women or encouraging her to ‘endure’ the crime of domestic violence.

This was the case for Arihi, but now she understands domestic violence is never the fault of the survivor and the blame must be placed on the perpetrator who commits the crime.

“It is crucial for people like me to be approached by the government proactively so that we can apply for services,” said Arihi.

Shortly after the visit by the REACH mobile team, Arihi was granted a Temporary Protection Order (TPO) and a Maintenance Order under the Family Protection Act.

The TPO has made her feel safer while the maintenance order obliges the father to provide weekly financial contributions to her for an initial three months, ensuring she is able to raise their three children as a single mother.

The Tonga Family Protection Legal Aid Centre continues to monitor her case for any breach of the order and to provide further legal assistance if required, including an application for permanent maintenance before the TPO expires.

In Tonga, Arihi was just one of the many people living in remote, rural and maritime communities who benefited during the pilot initiative that provided information about social services available to citizens including: youth programmes, registration for labour mobility and seasonal workers scheme, women’s livelihood assessments and microenterprise, community development grant, registration for the Electoral Roll, national ID, family protection, legal aid and police services, support services for women, men and families, while also receiving information about citizens’ rights and gender equality.

The REACH pilot initiative, adapting a successful model implemented in Fiji, develops an integrated government platform to provide knowledge and awareness raising, and to deliver government services to remote and vulnerable populations in Samoa and Tonga. It aims to enhance citizens’ access to justice, women and family services, and government services with a focus on the populations whose access may be limited such as persons with disabilities, gender-based violence survivors, older persons and people in remote communities.

The REACH pilot initiative aims to contribute to Tonga’s achievement of the Sustainable Development Goals. Among the 17 Goals, the initiative focuses on Goal 16 which is a commitment to promoting peaceful and inclusive societies for sustainable development, providing access to justice for all and building effective, accountable and inclusive institutions at all levels; and Goal 5 which is a commitment to achieving gender equality and empowering all women and girls.