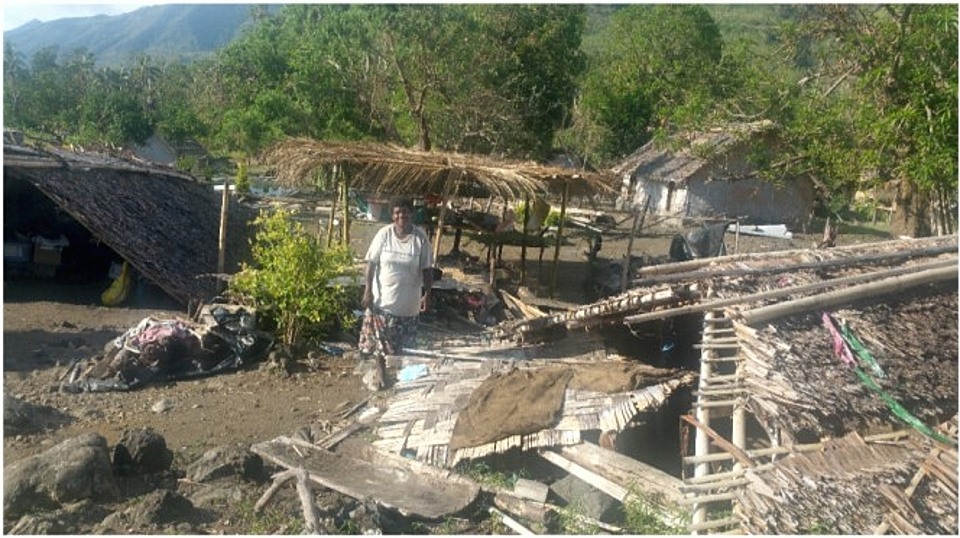 Rose David of Wusi Village in West Coast Santo, Vanuatu stands next to her home that was destroyed by Category 5 Tropical Cyclone Harold in April 2020. Photo credit: UN Women/Betty Zinner-Toa.

Already dealing with the COVID-19 crisis, some countries in the Pacific have had to manage the dual impact of a tropical cyclone.

Although the Pacific has largely been spared by the spread of the disease relative to other regions around the world – with Fiji hardest hit of the six countries the UN Women’s Ending Violence Against Women and Girls programme works in, at 18 confirmed cases – all of which have since been cleared, and several countries without a recorded a case so far – the economic and social consequences have been deep.

While the region was still dealing with COVID-19 response and preparing for a potential ‘second-wave’, four countries – Solomon Islands, Fiji, Tonga and Vanuatu – also had to manage the impact of Tropical Cyclone Harold, which devasted parts of each country in April. TC Harold reached Category 5 status by the time it made landfall in Vanuatu, causing severe destruction.

In Tonga, one of the crisis centre’s branches on the island of ‘Eua was destroyed, and while the six centres run by Vanuatu Women’s Centre in the different provinces in Vanuatu were still standing, the environment around it was affected, as were the people.

According to Vanuatu Women’s Centre Coordinator Merilyn Tahi, the priority for the centre now is just listening to women.

“Women are calling in on the national line. They are coming to the centre as well now – we are maintaining social distancing. It has been hard with COVID and cyclone at the same time but through support from UN Women, we were able to quickly organize mobile counselling visits – where we made 30 physical visits to three areas – Malampa, Sanma and Pentecost. At the moment, women in the in the cyclone-affected areas are not talking specifically about violence because they are more concerned about survival – so many don’t have homes. They are worried about their children.”

Those calling in on the helpline and physically visiting the centres are reporting domestic violence, sexual abuse, incest and requesting information on COVID-19. For those affected by the cyclone, shelter, food and water are more important right now, with Vanuatu Women’s Centre supporting where it can, along with the Government. Tahi believes women will start sharing more once their basic needs are met.

The Coordinator of Fiji Women’s Crisis Centre, Shamima Ali, says the two-pronged set of emergencies has illustrated, more than ever, that crisis centres need to follow a coordinated approach.

Aside from providing counselling, the centre in Fiji also supported many of its clients by supplying them with food, medicine and other essential items.

“One of our clients called from an evacuation centre in Tailevu saying the babies there didn’t have milk. So, we responded to these needs as well, even supplying painkillers for headaches, sanitary kits, toilet paper, boosk for children as well because people also don’t think of providing these sorts of items to evacuation centers.”