Across the Pacific region, crisis centres respond to increased cases of violence against women amid COVID-19 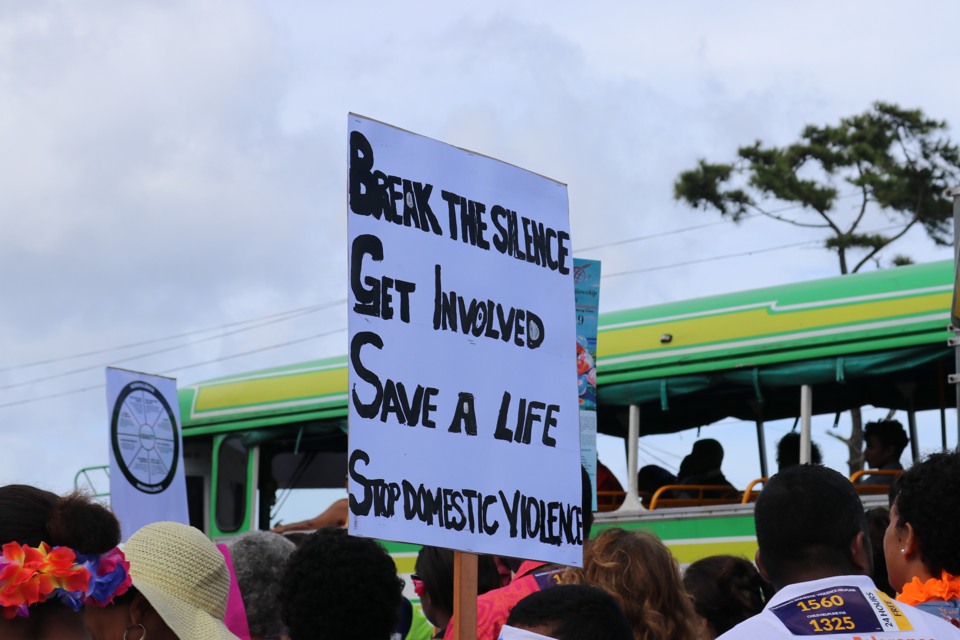 As COVID-19 prevention measures in the Pacific region and around the world limited movement and encouraged home isolation, the number of women seeking domestic violence support services have surged.

In Samoa, there has been a 150 per cent increase in the number of helpline calls, compared to the same time last year, says Silliniu Lina Chang, President of the Samoa Victim Support Group (SVSG).

“Tensions build as families are hit by unemployment, and from not being able to provide for basic necessities. Families were fighting over the rationing of food; neighbours were stealing from each other’s plantations; domestic violence was rife as couples were forced to stay in close proximity to each other during lockdown, and with the daily struggle for food and other necessities, stress and anger were the usual triggers of violence,” said Chang.

Fiji’s national domestic violence helpline recorded a significant increase in calls in April (around 527 calls), compared to 87 in February and 187 in March.

“Close to 50 per cent of women are reporting a correlation between COVID-19 and increased violence, linked directly to the restrictions of movement and economic strain on families,” said Fiji’s Minister for Women, Children and Poverty Alleviation (MWCPA), Hon. Mereseini Vuniwaqa, in a joint press release with Fiji Women’s Crisis Centre, Medical Services Pacific and the UN Women Fiji Multi-Country Office (MCO). “Close to three-quarters of women reported physical violence, including some extremely serious forms of violence, such as being punched, kicked and hit by stones and timber.”

The Coordinator of Fiji Women’s Crisis Centre, Shamima Ali, says there is a corresponding need to step up responses for women. “The cases of violence coming in are both from existing clients, where the levels of violence have increased, as well as new clients. There is so much coercive control faced by women from their partners. Controlling all her movements, checking if she is in the house. I really fear for mental health issues – we’ve had some contemplating suicide. So, when the women are calling out, we are ensuring that we send top-up [mobile credit], so they have someone to talk too.”

“We at the Fiji MCO are working closely with all our programme partners across the Pacific, including governments, civil society organisations, and communities, to provide the support needed to address violence against women and girls, including before, during, and after an emergency.”

Through the Gender-Based Violence (GBV) Working Group, formed under the Fiji Safety and Protection Cluster, the Ministry of Women, Children and Poverty Alleviation is leading efforts to rapidly advance prevention and response to violence against women and girls during COVID-19. This GBV Working Group is led by MWCPA, the Fiji Women’s Crisis Centre, and UN Women and works in partnership with frontline service providers, who are signatories to the Fiji National Service Delivery Protocol for Responding to Cases of GBV, and other key stakeholders to address GBV.

As with all crisis centres working with their governments in their respective countries, the Kiribati Women and Children Support Centre and the Solomon Islands Family Support Centre is also working to ensure that women are part of all national safety plans.

But despite all the efforts of the crisis centres to address violence against women and girls, key challenges remain to varying degrees in all countries, as they do even in non-emergency times. Slow response or no response from police and the judiciary, insufficient prioritization of health care (including mental health trauma), non-inclusion of women and girls in response plans and lack of coordination, remain barriers in many places in the Pacific and across the globe.

Lorio Sisiolo, Coordinator of the Solomon Islands Family Support Centre, says “despite the pandemic, it is vital for all service-providers to support each other. Let us all keep the flame alight for the survivors of domestic violence and abuse by standing with them through this time of hardship for most of the women who are locked up behind their doors.”

Silliniu Lina Chang, President of the Samoa Victim Support Group, reiterates the need for greater coordination and solidarity, saying “COVID-19 has presented us and our blue Pacific family with a rare opportunity – a time for all of us to reset. Think outside of our comfort zone and look beyond to the neighbour that is in need.”

Related News
11/06/2020
Across the Pacific, crisis centres respond to COVID-19 amid natural disasters
11/06/2020
Early preparations and data-gathering mark responses to COVID-19 in Fiji and Tonga
02/04/2019
Workshop: Interagency Essential Services Guideline
27/02/2019
Ways to Reduce Violence Against Women and Girls with Disabilities in Samoa and Kiribati
28/10/2013
In cities, efforts to make public spaces safer for women and girls
END_OF_DOCUMENT_TOKEN_TO_BE_REPLACED