Women worksite supervisors in India’s northern state of Uttar Pradesh (UP) are now able to demand work , manage worksites , and assert themselves when wages are not paid.

Lalitpur - Haribai fought all odds to become a mate or a worksite supervisor under the world’s largest pay-for-work programme, the Mahatma Gandhi National Rural Employment Act (MGNREGA).  “I was not aware of MGNREGA but after receiving training from Sahajani Shiksha Kendra (SSK), I came to know about the scheme,” she says.

Now, Hari Bai basks in the newfound respect that everyone, including government officials from Lucknow, give her because of her position as a worksite supervisor. “As I am a mate, people from other villages know me. When I started going for the training, my husband was quite suspicious. But when he came to know about the benefits and its positive impact on our lives, he became more understanding,” says Hari Bai, who works in Satavasa village of Uttar Pradesh’s Lalitpur district. 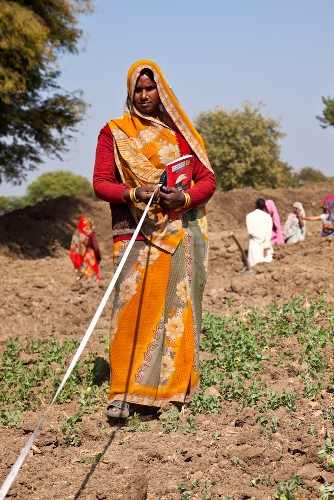 A project supported by UN Women’s Fund for Gender Equality in 69 panchayats across five districts of Uttar Pradesh supported Haribai and 9,000 other Dalit women to open bank accounts to control their wages . UN Women worked with Gender at Work through its partner organizations such as the Sahajani Shiksha Kendra (SSK).

MGNREGA provides a legal guarantee for at least 100 days of employment in every financial year. Every adult member of a rural household can undertake unskilled manual work for a statutory minimum wage of 174 (US$3.17) per day.

It not only demands that one-third of those employed be women but also emphasizes on equal pay for women. However, in many states like Uttar Pradesh in northern India, women’s participation is still as low as 19 per cent.

Claiming their space in the field

Something remarkable and unique happened in Chitrakoot district of Uttar Pradesh. A pond was entirely constructed by women, many of them from scheduled castes. The entire purpose was to help them to assert themselves. The proposal for the all-women worksite was presented by the Dalit Mahila Samiti (Dalit Women’s Committee) and approved by the Gram Panchayat (village council). 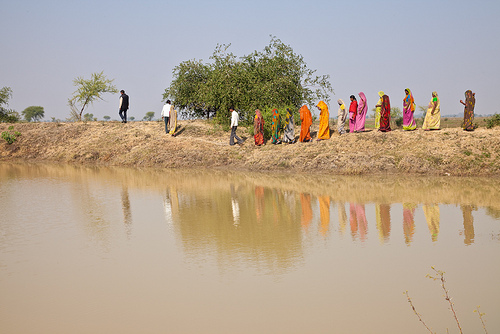 SSK developed a module and trained women mates for all the project sites with Gender at Work. Around 150 newly trained mates across UP, as well as women in the community then started demanding work under the scheme. They went on to and ensuring worksite entitlements, such as drinking water, work shelters and first-aid boxes. Not only that, they demand accountability when their wages are not paid. “If the Pradhan doesn’t give money to the labourers on time, we tell him that we will come to his house and put pressure on him  everyday until the payment is made,” says Paan Bai, a mate from Mahroni block, in Lalitpur.

In the current project with UN Women and Gender at Work, SSK has enabled women to negotiate fair wages and get rights through its MGNREGA-literacy programmes. “We have been struggling with the muster rolls at the worksites. This year, we will try to ensure that all worksites have muster rolls. There is a lot of discrimination against women mates. Every Pradhan has their own powerful mates who threaten women from coming to worksites,” says Meena. 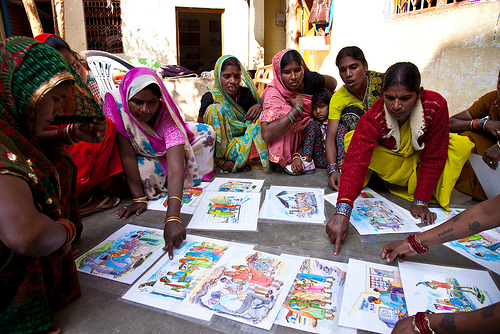 In the beginning, the women faced opposition from the male-dominated community. “Village people started saying that women who only know how to run a kitchen will never be able to use heavy tools used for digging. We took this as a challenge and started working on the construction,” says Kamala of Manikpur block in Chitrakoot.

The appointment of women mates in both Lalitpur and Chitrakoot also brought about a lot of opposition from men. “Not only did the Panchayat Mitra (panchayat coordinator) and Pradhan create problems, even the higher administration was discouraging,” says Meena, District Coordinator, SSK, which was set up by the Delhi-based Non Governmental Organization (NGO), Nirantar.

Today, the men of Lalitpur and Chitrakoot think differently about the work women do. “Now with the training of women mates there have been many positive changes. Women are able to perform technical tasks. They can measure work, explain work to labourers, supervisethe worksites, etc,” says Pradhan Chunni Lal Verma. “I want to encourage more women to come forward and receive mate training. When they go out to work, they gain courage and become independent,” says Pradhan Ram Sevak Yadav of Mahroni, Lalitpur.

Working with a woman mate also encourages other women to participate and encourages them to become one.  “We like having women mates because we don’t have to cover our heads while working. I will send my daughter-in-law for the next training of mates,” says Kamala.

“It has been said that women cannot compete with men in physical terms. But with the help of MGNREGA, we have proven everyone wrong. In our project, women have planned the pond, done the digging, and constructed the whole pond on their own. It was a very challenging task for us. But in the end, we proved ourselves which gave us an immense sense of pride,” said Pushpa, Head, Vanangana, an NGO that works for the rights of Schedules Castes, muslims and tribals.

UN Women and its partners have helped to ensure that rural women not only know their rights, but also that they can benefit from them.

Related News
23/06/2013
Empowering widows with information, skills and livelihoods in India
13/10/2012
Low awareness and fear of conflict prevent women from owning land, says study by UN Women and Landesa
10/02/2012
Cartoons for change in the New Delhi metro
10/03/2011
Advocating for their own fields: Women farmers speak up in India
15/06/2022
LinkedIn and UN Women join hands to create employment opportunities for women in APAC
END_OF_DOCUMENT_TOKEN_TO_BE_REPLACED