UN Women and the United Nations Peacekeeping Centre in India regularly provide gender and sexual violence training to blue berets before they deploy to conflict zones. Recently they organized a summit on ‘Women in Peacebuilding,’ by which they advocated for greater efforts to enhance women’s participation in peacekeeping.

UN Women and the United Nations Peacekeeping Centre in India regularly provide gender and sexual violence training to blue berets before they deploy to conflict zones. Recently they organized a summit on ‘Women in Peacebuilding,’ by which they advocated for greater efforts to enhance women’s participation in peacekeeping.

New Delhi - “The presence of female peacekeepers creates an environment conducive to the rehabilitation of humanity. It positively impacts the confidence of the local population. The reporting of gender-based violence increases, and in fact, my troops become role models for the local girls,” says Seema Dhundia, DIG CRPF (North Western Sector), Chandigarh Union Territory, north of New Delhi. She was the commander of the world’s first all-female UN peacekeeping force that was dispatched to Liberia in 2007.

To amplify advocacy and enhance capacity of Military Observers, UN Women and the Indian Peacekeeping Centre (CUNPK) in New Delhi train peacekeepers to better understand and respond to sexual violence in conflict and post conflict settings.

“During the trainings, I emphasize that peacekeeping calls for sensitivity when dealing with men and women in war-torn societies. I discuss how peacekeepers can support host communities to prevent sexual violence,” says Smita Mitra from UN Women’s Office for India, Bhutan, Maldives and Sri Lanka.

This two-day module is based on actual scenarios so the peacekeepers can understand how to respond to situations. During the training, short video clips are screened and case studies are shared with peacekeepers so they can come up with practical solutions to cases of sexual violence and abuse. 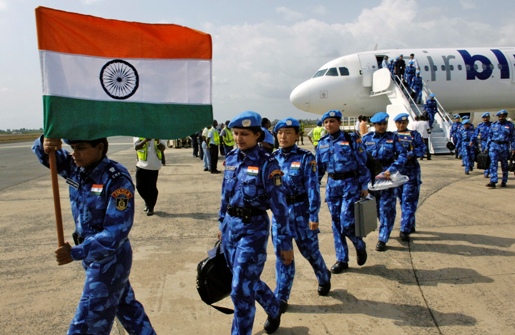 “The pre-deployment course that UN Women put forward has an enormous impact. Peacekeepers returning from their first deployment after participating in the training told me that they benefited so much from the training and it greatly increased their ability to serve the victims and population. It is very important to have a period of training to better understand the symptoms, body language, and needs of victims of sexual violence,” says retired Major General Patrick Cammaert, former military advisor to the Secretary-General and the United Nations Force Commander for the Eastern Democratic Republic of the Congo.

The Centre is an international centre for training, and courses are meant for peacekeepers from India and around the world. 12 trainings have been conducted so far by UN Women on sexual violence. “Training is the most important factor. Whether male peacekeepers or female peacekeepers, everyone must be trained suitably to deal with gender-based sexual violence,” says DCP Dhundia.

Supporting 1325: A Resolution for change

With the adoption of Resolution 1325 in 2000, the UN Security Council recognized the importance of women’s full involvement in peacekeeping and peacebuilding processes. Resolution 1325 acknowledges the unique experiences that women face in times of conflict and thus the crucial input they have to offer towards building peace.

“UN Women is working in diverse ways to combat the fact that the expertise, knowledge, and skills of women are still vastly under-utilized when it comes to early warning, planning for peace, and sustainable gender-sensitive rebuilding after conflict,” says Sushma Kapoor, Officer-in-Charge, UN Women India. 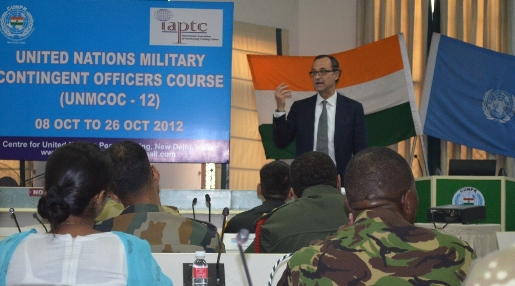 To help promote gender equality in peacekeeping operations, UN Women and the CUNPK organized a summit on “Women in Peacebuilding” in New Delhi, India in February 2013. Close to 300 participants from 20 countries including UN missions and UN agencies attended the Summit. The major outcome of the conference was a consensus document that highlighted best practices for engaging women in peacebuilding. The participants also asked made strong recommendations for increasing the number of women in UN Missions.

Participants of the landmark Summit on Women and Peacebuilding in New Delhi in February 2013 Photo credit: CUNPK/UN Women

Participants identified methodologies to increase ownership of Troop and Police Contributing Country to raise awareness of the importance of training and deploying more women in senior positions in peacekeeping missions.

“In order for successful gender-sensitive peacekeeping to take place, there needs to be strategic political consensus and agreement on rules and mandate,” says Cammaert.

Currently, India is the third-largest contributor of military and police personnel to UN peacekeeping operations around the world. India was also the first country to send an all-female peacekeeping unit on a foreign mission. More than a hundred Indian women were sent to Liberia in 2007 to strengthen the rule of law and maintain peace in the country. Their presence increased the ability of women in the host communities to access support. They also served as mentors to women and girls during peacebuilding activities.

On the frontlines, women foster a sense of stability, security and trust between the peacekeepers and survivors of armed conflict. As a result of the deployment of the Indian all-female peacekeeping force, the reporting of sexual violence increased as women and girls felt safe to come forward and confide in the female peacekeepers. There was also a dramatic increase in women joining the Liberian National Police Force.

Historic Summit on Women and Peacekeeping in India: http://www.unwomensouthasia.org/2013/historic-summit-by-un-women-and-centre-for-united-nations-peace-keeping-highlights-women’s-role-in-peace-building-2/

Related News
08/05/2013
Towards stronger social security for women
05/12/2022
ASEAN RPA WPS launch
30/09/2022
Women in Sri Lanka call for stronger measures to protect their rights
22/09/2022
women and peace plan in the Philippines’ Bangsamoro region
25/07/2022
Take Five: “It is our responsibility as the generation for future, as the generation for today, to hold people in power accountable.”
END_OF_DOCUMENT_TOKEN_TO_BE_REPLACED