Towards stronger social security for women

New Delhi, 8 May 2013: A first of its kind conference on Women’s Social Security and Protection in India , held on 6 and 7 May 2013, outlined non-negotiable principles on women’s social security. The conference was organized by UN Women, Programme on Women’s Economic Social and Cultural Rights (PWESCR), ILO and Heinrich Boll Foundation. Not only did it bring together unions, women’s organisations, government representatives and UN agencies, the conference also helped to arrive at a consensus on the ‘ideal’ of social protection. 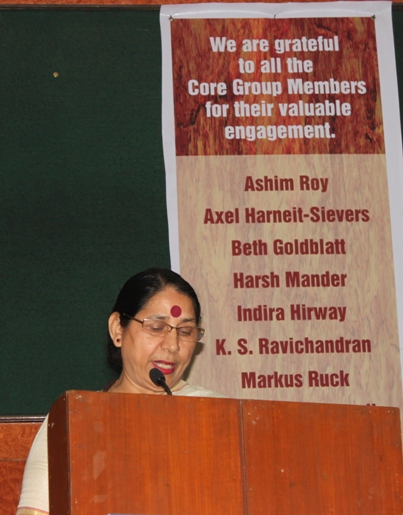 At the event, Honourable Minister of Women and Child Development Krishna Tirath and the Minister of Rural Development Mr Jairam Ramesh both stressed the importance of social security for women. “I support and endorse all the recommendations being made by this forum. But instead of proposing new schemes, I hope you will join hands with us to strengthen the delivery of existing schemes of the government such as Direct Benefit Transfers (DBTs) for pensions and scholarships to ensure that benefits reach women directly,” said Mr Ramesh. He also highlighted the importance of “civil society partnerships for innovation.”

The non-negotiable principles developed for social protection in India urged policy makers to look at social security from a human rights perspective. “Globally we have seen that wherever governments have invested in social protection, economies have become stable and societies have averted collapse. Investment in social protection is not only a social and ethical issue, but also important for realizing the human and economic potential of citizens,” said Sushma Kapoor, Deputy Representative and Office-in-Charge of UN Women Office for India, Bhutan, Maldives and Sri Lanka. “Women’s social protection is imperative to realising this potential, especially in addressing the specific needs of women in informal employment, which makes up a staggering 93 per cent of India’s workforce and who are invisible to employers and government alike,” said Tine Staermose, Director of the ILO Decent Work Team for South Asia and Country Director for India. 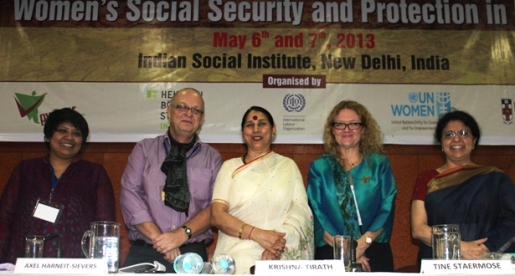 Representatives from sex workers’ groups, along with those from conflict areas such as Manipur emphasised the need foruniversal but not uniform social protection that can respond to women and their varied vulnerabilities. Anuradha Talwar of Pashchim Banga Khet Mazdoor Samiti pointed out that the current form of the National Food Security billperpetuated the two-child norm. “It provides cash as opposed to in-kind transfers. Also it only stipulates for a one-third coverage which inevitably would leave out the most marginalised women,” she added.

Dalit women, migrant workers, construction workers and street hawkers also asked for individual and independent rights for women, rather than only those based on household or family. Enhanced government investment in budgeting and monitoring of schemes by involving women’s groups in gender audits were other recommendations made during the conference.

Right to livelihood for social security was also discussed – including social assistance, essential services, livelihoods promotion, and transformative laws. Nalini Nayak, a feminist activist from Kerala, said that the right to life and livelihood should form the core of social security when ‘patriarchal and violent development’ was snatching away lands, water and commons from women and communities. Supporting production systems, reviving agriculture and agrarian-based livelihoods were also called for by others like Kavita Srivastava, General Secretary, People’s Union for Civil Liberties as well as Annie Raja, General Secretary, National Federation for Indian Women. 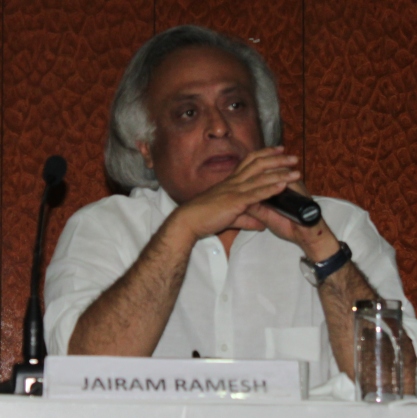 “We need to link social security to women’s security,” said Navsharan Singh, Senior Specialist at the International Development Research Centre (IDRC). She added, “Violence against women – preventing and protecting from the same – is an intrinsic part of women’s right to social security.”

UN Women is conducting a national study to analyze the design and delivery of social protection measures for food, employment, health, maternity and pensions. In future, UN Women will work in select states to implement and monitor social security measures through women’s resource centres. Led by the community, these centres will help strengthen women’s access to social services. Women’s collectives will be strengthened to conduct gender audits of social security schemes at Panchayat level.

Related News
29/05/2013
Pre-deployment training boosts preparedness of UN Peacekeepers
05/12/2022
ASEAN RPA WPS launch
30/09/2022
Women in Sri Lanka call for stronger measures to protect their rights
22/09/2022
women and peace plan in the Philippines’ Bangsamoro region
25/07/2022
Take Five: “It is our responsibility as the generation for future, as the generation for today, to hold people in power accountable.”
END_OF_DOCUMENT_TOKEN_TO_BE_REPLACED