Bangkok - In a courtesy meeting today at the Ministry of Social Development and Human Securities, UN Women Asia Pacific Regional Director extends technical support to the Thai government in its efforts to put a stop to violence against women, empower women in politics and economy and Promoting women’s role in facilitating peace in  the deep south 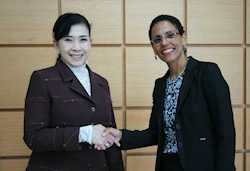 Ms. Roberta Clarke, Regional Director of UN Women Regional Office for Asia and the Pacific and Representative in Thailand paid a courtesy visit to H.E. Pavena Hongsakula, Minister of Social Development and Human Security (MSDHS) who was appointed on 30 June to lead the agency responsible for women’s affairs.

The Minister and Ms. Clarke discussed technical cooperation to advancing women’s empowerment including through strengthening of working systems to support the operations and provisions of emergency services to survivors of domestic violence and violence against women through the initiative of One Stop Crisis Centre (OSSC).and increasing women’s participation in governance and peace processes.

The launch of Thailand’s pioneering IT-equipped OSSC nationwide in April 2013 by Prime Minister Yingluck Shinawatra reinforces the continuing efforts to prevent and protect against violence against women and girls after Thailand joined UN Women as the first ASEAN country to commit to UN Women’s  newest global initiative COMMIT on the March 8 International Women’s Day.

The OSSC requires MSDHS to act as a coordinating agency to provide fast social assistance services to children, women, elderly and persons with disabilities who confront problems of human trafficking, gender-based violence, child labour and teenage pregnancy. The centers are meant to ensure a comprehensive inter-ministerial response and services to women and children.

UN Women works closely with the Ministry of Social Development and Human Security, Royal Thai Police, Office of the Attorney General, Ministry of Education and Sukhothai Thammathirat Open University in its legal and policy support for effective implementation of the Protection of Domestic Violence Victims Act 2007 in Thailand, including capacity building of police investigators, police cadets, prosecutors, education personnel, and youth & community groups on ending violence against women. It will also complement existing UN Women-Thailand collaboration towards an increase in number of women in politics, strengthened role of women in promotion of peace and security, and in the promotion of women’s access to justice.

At the meeting, the Minister invited UN Women to join a committee which is planned to be set up by the Ministry on international collaboration on OSCC.

Related News
22/12/2021
In the words of Police Lieutenant Colonel Melbeth Mondaya: “Protection and education for girls is especially important because they are the key to women’s empowerment.”
30/10/2020
From where I stand: “Buddhist and Muslim women are cooperating to support the peace process in Southern Thailand”
13/11/2018
In the words of Palwasha Hassan: “The time is now to transform that suffering into our strength”
17/01/2017
British Embassy Bangkok and UN Women host dialogue on conflict-related sexual violence survivors and children born out of rape
25/01/2014
Statement of the United Nations Entity for Gender Equality and the Empowerment of Women (UN Women)
END_OF_DOCUMENT_TOKEN_TO_BE_REPLACED