Dalit women’s pursuit of an equitable and equal society

Constituent Assembly (CA) members are currently drafting the new Constitution, expected to be completed in January 2015.

More than 300 Dalit and non-Dalit persons converged in Kathmandu to add their voices to the debate on the new constitution and ensure equal access and legal rights to all, without discrimination on the basis of caste, gender, class, language or religion. They were attending a three-day Dalit Women’s National Conference for Democracy, Justice, Sustainable Peace and Inclusive Constitution during 2 to 4 December. 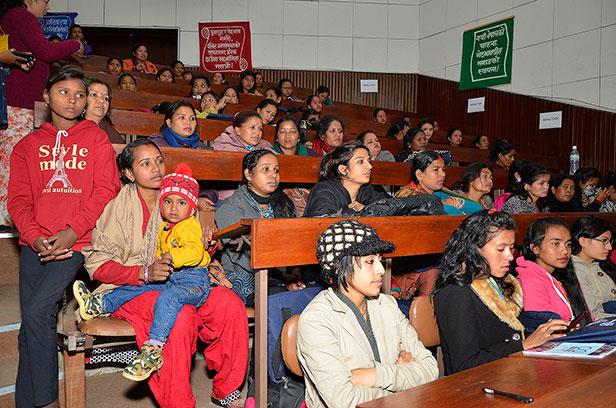 Laxmi Ram, aged 24, traveled from Rautahat in the Central Terai with her 2-year-old daughter and 12-year-old cousin to take part in the conference. Many women like Laxmi Ram came from remote villages of the 75 districts determined to ensure that a just and equitable society is formed, and one where Dalit women enjoy their rights and have opportunities for participation, development and a better life.

‘’The conference is timed so that our voices are heard. The new Constitution should be Dalit- and women-friendly, and also able to provide opportunities for community-level Dalit women to put their agendas at a national level’’, said Durga Sob, President of Feminist Dalit Organization (FEDO), the organizers of the conference. 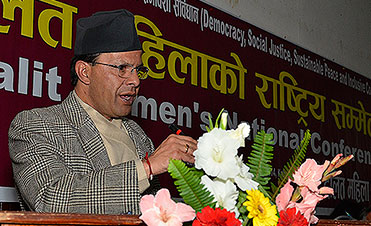 Addressing the inaugural session, the Minister for Information and Communication, Minendra Rijal, underlined the paradox between laws and practice: ‘’The Government of Nepal has been doing its part to put an end to caste-based discrimination. But having laws passed isn’t going to turn around situations from bad to good overnight. Violence takes place at household levels, discrimination takes place at community levels, [in addition to the Government] it is also the responsibility of every individual, and of the media to stop this.’’ The Minister also emphasized that Dalit representation is highest in the political domain, compared to other population groups and professions. 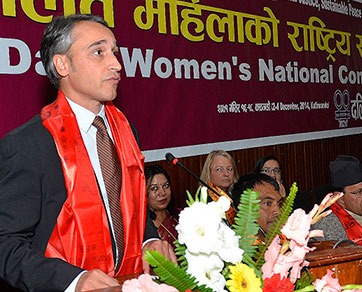 Ziad Sheikh, UN Women Representative and Acting UN Resident Coordinator, said, ‘’Nepal as a member state and signatory to international human rights instruments has an opportunity to further demonstrate its commitment and action to eliminate caste-based discrimination during the upcoming second cycle of the UPR in 2015.’’ Sheikh highlighted the participation and contribution of Dalit women during the Beijing+20 review process. He emphasized how their voices had been heard at the regional level and will be heard next year at the global level during the Commission on the Status of Women and the UN General Assembly’s review of Member States’ commitments to Beijing.

Other speakers stressed how Dalit women are at greater risk of discrimination. The exclusion of caste-affected communities – in particular women – by other groups and the inherent inequality in social relationships lead to high levels of poverty. This in turn leads to their exclusion from the development process and involvement in decision-making and meaningful participation in public and civil life. 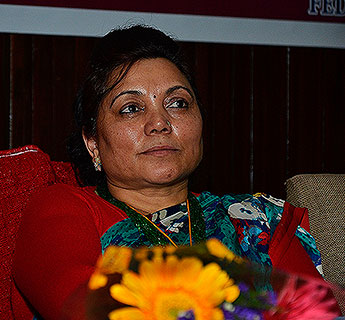 The conference concluded with the issuing of a 21 point Declaration. FEDO will present the Declaration to political parties, CA members, and government and relevant stakeholders to ensure inclusion in the Constitution. One of the key issues discussed during the conference – point 19 of the Declaration – concerns the provision of citizenship to a child through the mother’s name. In November 2014, during the Global Open Day discussions, citizenship certificate rights was one of the major issue raised by the audience. The CA members, in response, gave assurances that they would end the citizenship certificate problem and ensure full gender equality in the new constitution. Nepal is among six countries in the Asia Pacific region that limits a woman’s ability to pass citizenship on to her non-Nepali spouse or child.

Corresponding to the theme of this year’s SAARC summit: ‘Deeper Integration for Peace, Progress and Prosperity’ also in November, Asia Dalit Rights Forum organized a four-day programme. Themes included: Multiple forms of discrimination and violence against Dalit women; and Land, Livelihood and Budget Allocation for Dalits and other socially excluded communities in South Asia. During the programme, South Asian Parliamentarians met to discuss the Post-2015 Sustainable Development Goals in an ‘Untouchability-free South Asia’. Speaking on the occasion, the former Prime Minister and UCPN (Maoist) leader Baburam Bhattarai said, ‘’The South Asian Parliamentarians’ Forum can work together in introducing the common agenda of the Dalits in the corresponding national parliaments of the member governments for a better synergy at the regional level.’’

Of the 260 million Dalits worldwide, the majority live in south Asia. Nepal’s 2011 census data showed women accounted for 51.5 percent of the country’s population, of which 14 percent are Dalit women.