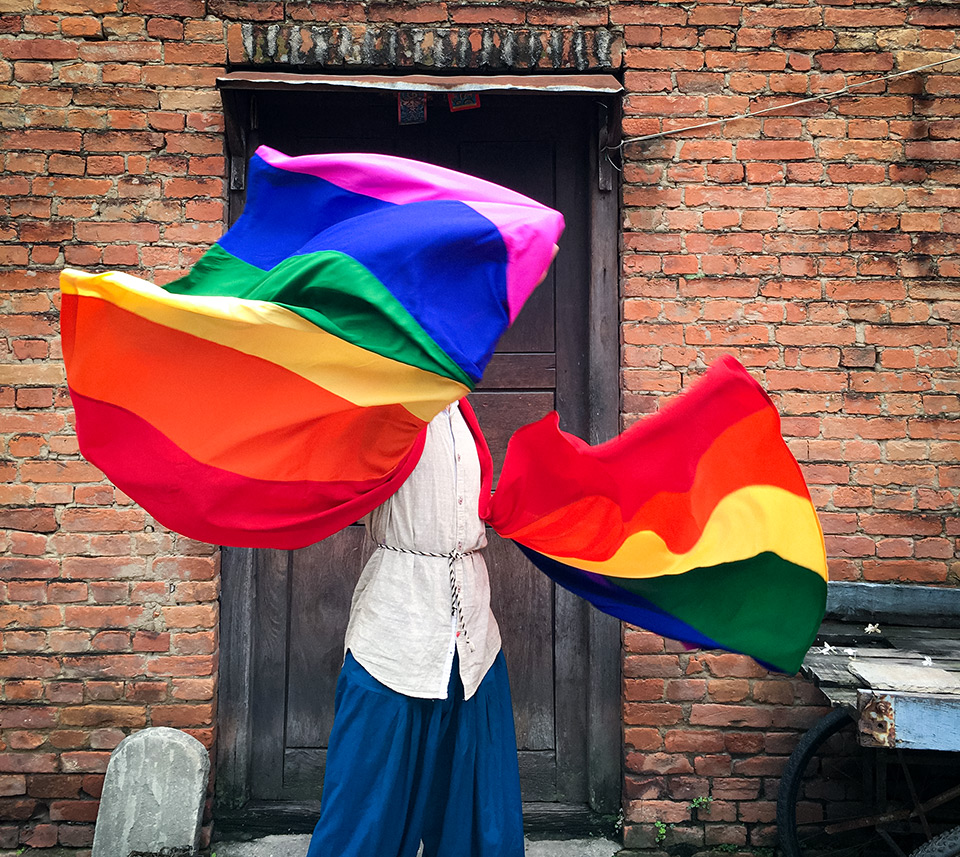 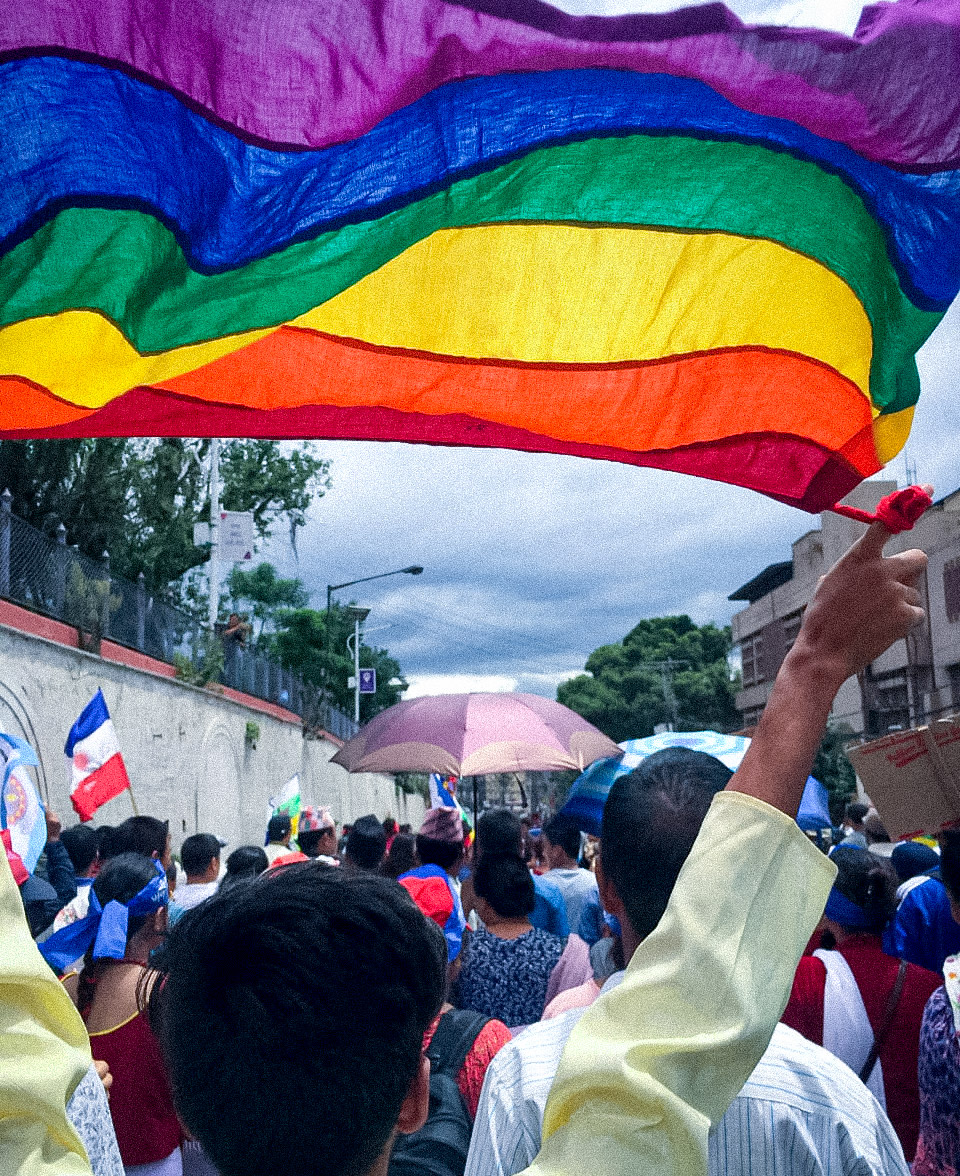 Kathmandu, Nepal — In September 2015 Nepal promulgated a new constitution that for the first time recognized the rights of LGBTIQ people to equality and social justice and to citizenship. Yet more than five years later, LGBTIQ people still struggle to obtain citizenship, legal protection and marriage equality, and still must fight stigmas against gender and sexual minorities. (LGBTIQ stands for lesbian, gay, bisexual, transgender, intersex and questioning/queer.)

Advances in LGBTIQ rights in Nepal began with a 2007 Supreme Court ruling to legally recognize a third gender category; audit all laws to identify those that discriminated against LGBT people; and open the door to consider same-sex marriage. In 2003, another Supreme Court decision said a person cannot be prohibited from cohabitating with someone of the same gender.

But an analysis Prevention Collaborative did in July 2020 with support from UN Women Nepal said that, “Translating the Supreme Court rulings into a legal framework that guarantees inclusion and protections is slow-paced and hindered mainly by bureaucracy and dominant patriarchal institutional and social culture.”

And the COVID-19 pandemic now has made LGBTIQ people even more vulnerable. 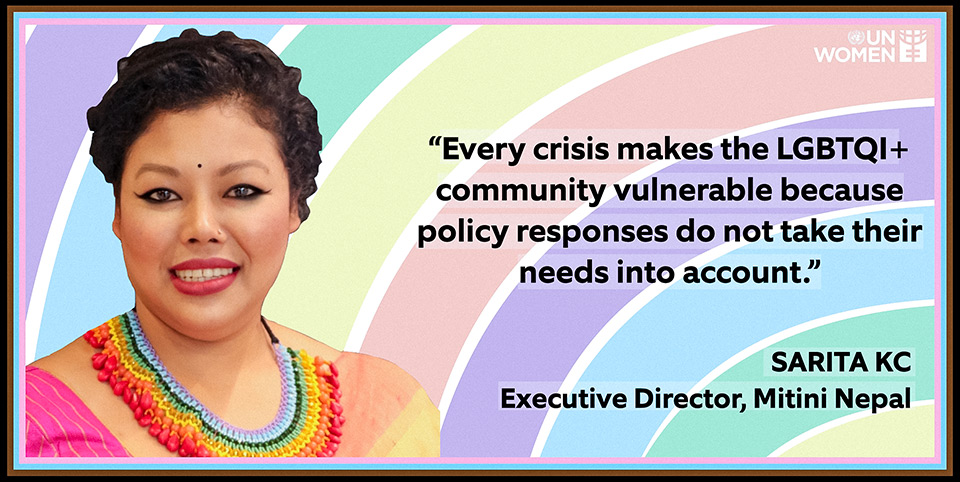 “Every crisis makes the LGBTIQ community vulnerable” because policy responses do not take their needs into account, she said.

Sarita KC was speaking at a webinar in September 2020 on LGBTIQ activism in the Asia-Pacific region that UN Women’s regional office, UN Women Nepal and Prevention Collaborative organized to discuss with LGBTIQ people on how the coronavirus pandemic has affected them. Prevention Collaborative is a network of professionals and activists working on gender-based violence.

During the pandemic, UN Women Nepal’s work has focused on promoting the inclusion of marginalized communities in relief efforts.

UN Women Nepal chairs the Gender in Humanitarian Action Task Team that brings together various groups to discuss the concerns of women and marginalized groups including LGBTIQ people. Participants include United Nations agencies, development partners, local and international NGOs, and the Government. The team meets during humanitarian crises such as the current pandemic.

UN Women is also helping with another concern of LGBTIQ people this year -- their representation in the national census scheduled for 8-22 June year.

The last census, in 2011, tallied only 1,500 persons identifying as LGBTIQ. That was because the census lacked specific questions or a method to collect this data, and the nature of the census made many people afraid to come out. In 2019, UN Women supported a dialogue between the Government and LGBTIQ groups to ensure a proper counting this year.

UN Women Nepal provided technical and financial support to strengthen gender equality and social inclusion in the census enumeration and supervisor manual; as well to develop a dedicated gender equality and social inclusion manual. It also helped facilitate a dialogue that led to the inclusion of a comprehensive definition of LGBTIQ in the manual, based on recommendations by LGBTIQ groups.

Another challenge in the efforts to advocate equal rights for Nepal’s LGBTIQ people is the lack of data on their lives and experiences. To address this, UN Women Nepal this year will conduct research on the discrimination and violence faced by LGBITQ groups, said Subha Ghale, Programme Analyst,  Access to Justice, UN Women Nepal.

Ghale said that the organization will continue engaging with LGBTIQ groups to advocate gender equality in line with the recommendations made by human rights mechanisms including the CEDAW Committee to Nepal’s Government. The committee of independent experts monitors the implementation of the Convention on the Elimination of All Forms of Discrimination against Women, which is also ratified by Nepal.