“The Beijing Declaration and Platform for Action are not mandatory instruments but, since their endorsement in 1995 by United Nations member states  including Viet Nam, both documents have been considered  as some of the most comprehensive  documents  on women issues” said Pham Ngoc Tien, Director of the Department of Gender Equality Department, Ministry of Labour, Invalids and Social Affairs (MOLISA), at a national consultative workshop in Hai Phong province held by the department he leads with support of UN Women Viet Nam.

The workshop that brought together over 40 participants including key policy makers and gender experts from the Government aimed to review challenges and achievements in advancing gender equality in Viet Nam in the past two decades. It was part of a sustained effort by the Government and key stakeholders to review the implementation of the Beijing Platform for Action (BPFA) in preparation of the 20th Anniversary of the 1995 Fourth World Conference on Women in Beijing, to be globally celebrated next year.

Impact of action taken during the last 20 years

Reflecting on progress for women and girls since 1995 in Viet Nam, the workshop discussed actions taken particularly in the past five years since the last review of BPFA in 2010, as well as the achieved results. 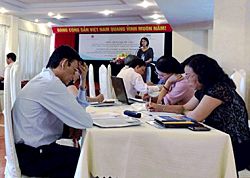 Shoko Ishikawa, UN Women Viet Nam Country Representative, emphasized the significance of the 20 year review of BPFA highlighting its linkage with the ongoing global discussions to define the new development goals to follow the Millennium Development Goals. She said that “more importantly, the challenges and gaps that this meeting identifies should inform the government review of implementation of the National Strategy on Gender Equality, formulation of the National Programme on Gender Equality for 2016-2020, and also the next Socio-Economic Development Plan 2016 – 2020”.

Despite achievements, participants also identified remaining problems such as the increasing wage gap between men and women (by over 2 per cent in 2008-2011), the different retirement age (60 years for men and 55 for women),  persistence of all forms of violence, higher poverty  and discrimination rates among ethnic minorities, low level of health insurance coverage of poor women and a great number of women working in the informal economy with little access to social protection services and trapped by traditional gender stereotypes. Participants identified more public awareness raising activities, better guidance and coordination across government at central and sub-national on how to deliver better policies and services addressing the specific needs of women, and deliberate resource allocation to promote gender equality as key to address the current needs. 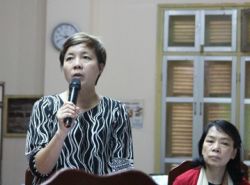 At a similar workshop held in Hoa Binh province last month by Government officials with civil society representatives and support of UN Women, Nguyen Van Anh, Director of Center for Studies and Applied Sciences in Gender-Family-Women and Adolescents (CSAGA) said that "Year-by-year, we have been working to support vulnerable women and girls and raise awareness of communities on gender equality in many regions of the country.  Our key challenges are limited resources, information and data analysis on gender equality and lack of effectiveness in the implementation of gender equality laws at local level.  The lack of gender awareness of local government staff is also a big barrier for the implementation of Gender Equality Law.”

The 20th anniversary of the BPFA is a reminder of the commitments made to women and girls 20 years ago about creating a world where they can fulfill their potential. Last year, UN Member States decided to undertake comprehensive national-level reviews of progress made and challenges encountered in the implementation of the BPFA.

The Government of Viet Nam has to date organized three consultations as part of the national review, the outcome of which will be a national report that to be submitted to the United Nations Secretariat. UN Women will continue to support the Government of Viet Nam, civil society representatives and other stakeholders to use this opportunity towards the global review in March 2015 to celebrate successes as well as identify areas for further action.

Related News
09/06/2021
Addressing the Gender Inequality of Risk and Promoting Community Resilience in Solomon Islands
08/03/2021
More women leaders in business “the best way” to boost recovery from the pandemic
27/01/2021
UN Women supports efforts to improve LGBTIQ rights in Nepal
11/05/2020
New pioneering effort to protect women and children in quarantine centres during COVID-19
19/12/2014
Op-ed: Economic growth and land – where are the women?
END_OF_DOCUMENT_TOKEN_TO_BE_REPLACED