Markets set to improve with Pacific women in the lead 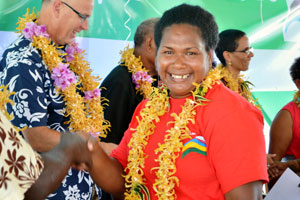 It may not have been a regular part of her everyday business, but it seemed interesting so she decided to go along. For market vendor Rose Starlyn, attending a series of UN Women-run workshops in April and May 2014 in Honiara, the capital city of her native Solomon Islands, turned out to be the beginning of a journey. So far, that journey has seen her address an audience of more than 100 people, including politicians and diplomats, and be elected as the first chairperson of the newly formed Honiara Central Market Vendors Association.

“We can make a market that is a happy place for everyone,” Rose, a vibrant woman of 37, says with a broad smile. “A place that is healthy for everyone, where more people, including tourists, can come, and market vendors can earn more money. We can create a place where people can learn and share skills, and women can ‘come up’.”

Rose is one of around 1,000 vendors working at the Honiara Central Market, an estimated 80 per cent of whom are women.[1] She works six days a week as a tailor and clothing vendor and the money she makes covers the school fees and bus fares for her five children.

In many ways, Rose’s story is typical of women at markets around the Pacific. Between 75 and 90 per cent of market vendors in the Pacific region are women; hours are long, profits are often low, and conditions difficult. Many female vendors come from rural areas and sleep at the market for the three or four days they are there, exposing them to a higher risk of gender-based and sexual violence as well as theft.

They are rarely represented in – and often excluded from – the planning and decision-making that determines how markets are run. 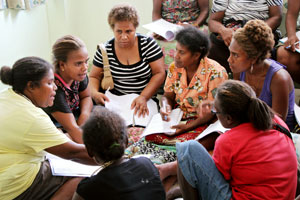 This was the motivation behind UN Women’s Markets for Change (M4C) project. Developed specifically for the Pacific region, where markets are often the main source of livelihoods, especially in poorer households, the six-year, multi-country initiative is injecting more than USD 10 million into ensuring that such workplaces in Fiji, Solomon Islands and Vanuatu are safe, inclusive and non-discriminatory. Principally funded by Australia’s Department of Foreign Affairs and Trade, the initiative was officially launched in Fiji, Solomon Islands and Vanuatu in April, May and August 2014 respectively, and workshops like the ones Rose attended in Honiara are among the project’s initial activities.

The goal is to create accessible, inclusive and representative governance structures that will help markets thrive, while strengthening the role and influence of women vendors. The workshops include a mapping exercise whereby participants ask fellow market vendors about the issues they face and the changes they would like to see, making the process fully participatory.

Ethel Sigimanu, Permanent Secretary for the Ministry of Women, Youth and Children’s Affairs in Solomon Islands, says the economic contribution that female market vendors make to their local communities and their country’s economy often goes unrecognized.

“Markets are male-dominated. The planning and decision-making and market operations are usually done by men, but it is the women who are doing the selling,” Ethel says. “The Markets for Change project makes women visible. And when women are visible, we not only see their hardships and successes, but we see tangible benefits through what women do.”

So far the workshops have been instrumental in forming vendors associations at Auki and Honiara markets in Solomon Islands, as well as in re-activating the Suva market vendors association in Fiji. At Nausori, also in Fiji, the Women’s Club, which was set up in 2012 to give female vendors a safe space to express their views, and the general vendors’ association have agreed to hold joint executive committee meetings to ensure that the needs and interests of all vendors are represented.

Preeya Ieli, Regional Programme Specialist for Women’s Economic Empowerment at UN Women’s Fiji Multi-Country Office, says that one of the keys to making the Markets for Change project effective is working closely not only with vendors, but also with market management, local government and other stakeholders. “It’s fantastic to see the enthusiasm with which vendors, management and government have embraced the project and how motivated they are to work together to make changes that will benefit everyone.”

For now Rose hopes to help make a difference for herself and her fellow market vendors.

“I can see many things inside the market that need changing – it is not clean; there is no water,” she explains. “This association is an opportunity to work together to make the market clean and good for everyone.”

Rose is looking forward to the day when she and her colleagues can say with satisfaction: mission accomplished.

[1] Stanley, J. A Survey of the Economic Performance of Selected Markets in the Solomon Islands and Papua New Guinea, UN Women 2009, unpublished