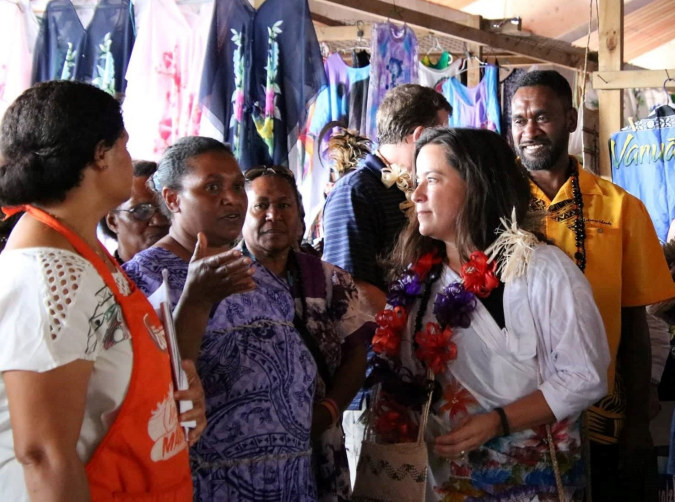 Market vendors of Port Vila market, Vanuatu welcomed the Canadian Minister of Justice and Attorney General of Canada, the Honourable Jody Wilson-Raybould during her visit to the Port Vila market today.

The Canadian Minister who is on an official visit to Vanuatu alongside the Canadian High Commissioner to Canberra, Mr. Paul Maddison, took the opportunity to tour the market and held discussions with vendors and representatives of the Silae Vanua Market Vendors Association (MVA) and the UN Women Markets for Change (M4C) project team.

Women market vendors shared their experiences, challenges and progress in growing their businesses with the visiting Minister and her delegation. “It’s inspiring to know that the voices of our rural women market vendors in Vanuatu are heard across the world, bringing us people such as the Canadian Minister of Justice and Attorney General, the Honourable Jody Wilson-Raybould, to our island nation to meet and learn about the lives of our market vendors,” said Ms. Eslin Solomon, President of Silae Vanua MVA.

The Government of Canada has joined the Government of Australia as a new partner to the UN Women’s Markets for Change project. The Honourable Minister of Justice visited the market as part of Canada’s support in progressing gender equality in the Pacific. Canada is contributing 3.35 million Canadian dollars (USD 2.6 million) over a period of three years which will enable the project to expand to provide more support and services to market vendors in the Pacific. Currently the project reaches over 7,500 market vendors in Fiji, Solomon Islands and Vanuatu.  With the additional funding, UN Women hopes to reach an additional 1000 women and men market vendors and market vendor farmers to provide support through training, increased access to services and improved infrastructure and working conditions. 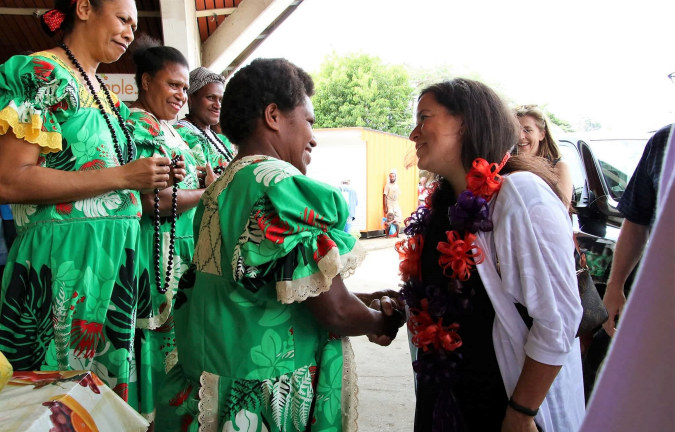 “UN Women is delighted to have the Canada join the Markets for Change partnership in March this year. The M4C Project is principally funded by the Government of Australia. Canada’s contribution to the project will see the project extended and expanded to provide support and services to additional markets in the region,” said Mr. Nicolas Burniat, UN Women’s Representative a.i.

“We are also honoured to have had the opportunity to meet the Honourable Jody Wilson-Raybould, who is an accomplished and inspiring woman leader in Canada, during her visit to Vanuatu and to have her meet, share experiences and inspire women community leaders in Vanuatu”.

The market tour was a lively demonstration of the strength of the Port Vila market vendors, who took the Honourable Minister and her delegation around each section of the market.  Market vendors shared their experiences and stories, shared songs and presented the Canadian Minister with traditional gifts. The delegation also included Port Vila’s Mayor Albert Sandy Daniel, Acting Town Clerk Ben Tabi, and two women Municipal Councillors, Jenny Regenvanu and Leipanga Manses.

UN Women’s M4C project is now an eight-year, multi-country initiative that aims to ensure marketplaces in rural and urban areas of Fiji, Solomon Islands and Vanuatu are safe, inclusive and non-discriminatory, promoting gender equality and women’s empowerment. A UN Women project, M4C is principally funded by the Australian Government, and since 2018 the project partnership has expanded to include funding support from the Government of Canada. UNDP is a project partner.

UN Women’s Markets for Change project: UN Women’s Markets for Change (M4C) project is a key component of its Women’s Economic Empowerment programme. M4C is a six-year, multi-country initiative that aims to ensure marketplaces in rural and urban areas of Fiji, Solomon Islands and Vanuatu are safe, inclusive and non-discriminatory, promoting gender equality and women’s empowerment. A UN Women project, M4C is principally funded by the Australian Government, and since 2018 the project partnership has expanded to include funding support from the Government of Canada. UNDP is a project partner.