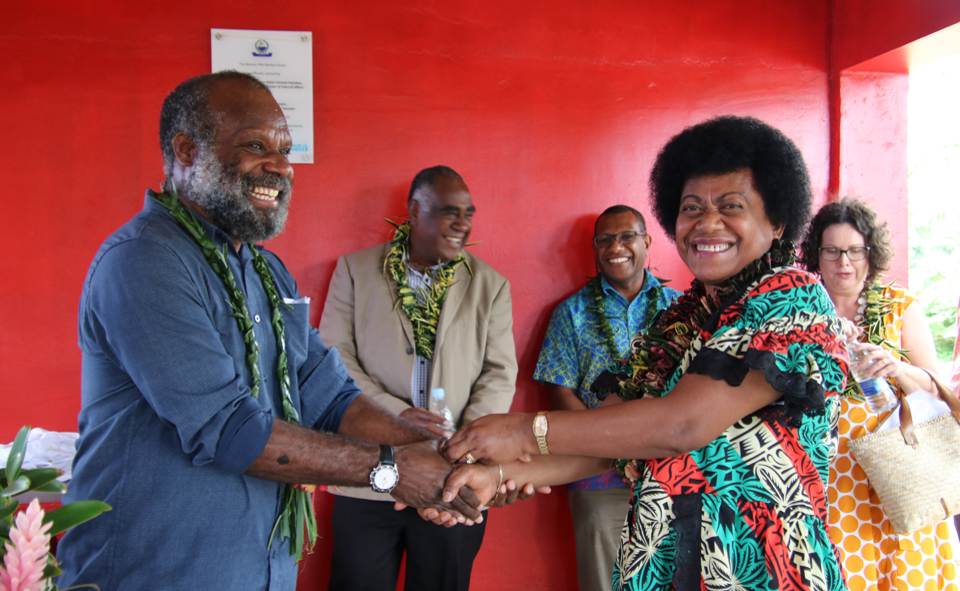 Handing over of the BH market keys by the Director General of Internal Affairs Cherol Ala Ianna to the Secretary General of Shefa Provincial Government Council Morris Kaloran. Photo: UN Women/Trisha Toangwera.

Port Vila, Vanuatu (October 1, 2020) – The residents of Beverly Hills and Emua communities celebrated the opening of their new markets yesterday, 30 September 2020. The markets were officially opened by the Deputy Prime Minister and Minister of Internal Affairs, Honourable Maau’Koro Alatoi Ishmael Kalsakau and the Australian High Commissioner to Vanuatu, Her Excellency Sarah DeZoeten, and will benefit over 70 households in both communities.

“It gives me great pleasure to handover these institutions to Beverly Hills and Emua communities. These are more than just market structures; they empower and unite communities and are symbolic of the Vanuatu Government’s decentralisation policy to bring its services closer to its people. I would like to encourage the communities to take good care and make use of these markets. The economy of our country starts at these small places and they will continue to support us through the Covid-19 pandemic,” said the Deputy Prime Minister.

Emua has been successfully operating a temporary market infrastructure for a number of years while awaiting this permanent infrastructure. The ring-road market is a unique model in Vanuatu that is managed by women with support from the entire community. It is also available for nearby communities to fundraise for their needs.

The Paramount Chief Manlaesinu of Emua village explained that the key to the market’s success was the women led management and community support. Without this mutual working relationship, the Emua market would have not been successful.

“We are pleased to finally open our new market house. This market house will benefit the entire village and continue to economically sustain and empower our livelihoods. We acknowledge the collaborative partnership and funding invested into this project and will share and take good care of this market house in the same way it will continue to take care of us,” said Chief Manlaesinu.

At Beverly Hills, the Representative of the Development Committee, Mr William Nasak, explained that the project was part of a larger development plan of the Committee that has been realised through the M4C Project. The market could be used to sell fresh produce, arts and craft, cooked food and other products to help households generate extra income for their needs. The new building will provide a safe space for trade for the women and benefit over 3,000 residents in the community.

Beverly Hills and Emua markets are part of the Shefa ring-road market projects under the UN Women’s Markets for Change project and are jointly funded by the Australian and Canadian Governments. The project was implemented by the Government of Vanuatu through the Department of Local Authorities, Shefa Provincial Government Council and Public Works Department. The new buildings include toilet facilities, benches, rainwater tanks and utilities to enable the women to commence operation.

“Australia is proud to have supported the Markets for Change program and worked with the Government of Vanuatu on the construction of the Beverly Hills and Emua market houses. Over 90 per cent of market vendors in Vanuatu are women. We know that when a woman’s income increases, so too does the wellbeing of her family and community. The Australian government recognises the importance of marketplaces and vendors to the economy of Vanuatu and is pleased to support the participation of women in the Vanuatu economy,” said Australia’s High Commissioner to Vanuatu, Her Excellency Sarah deZoeten.

“Canada is proud to be a partner in supporting the successful opening of the new market houses in Emua and Beverly Hills villages. Canada remains steadfast in our commitment to empowering women and communities in Vanuatu and across the Pacific region” says Mark Glauser, High Commissioner of Canada, who is resident in Canberra, Australia.

The UN Women M4C Project acknowledges the collaborative partnership and support from the communities, Silae Vanua Market Vendors Association, and Vanuatu Government through the Ministry of Internal Affairs, Department of Local Authorities, Shefa Provincial Government Council, and Public Works Department, and the great support and partnership in this project by the Governments of Australia and Canada.

UN Women’s M4C project is a multi-year, multi-country initiative that aims to ensure marketplaces in rural and urban areas of Fiji, Solomon Islands and Vanuatu are safe, inclusive and non-discriminatory, promoting gender equality and women’s empowerment. A UN Women project, M4C is principally funded by the Government of Australia’s Pacific Women Shaping Pacific Development (Pacific Women) program, and since 2018 the project partnership has expanded to include funding support from the Government of Canada. UNDP is an implementing partner.