New Delhi -  “Smart cities have to be safe for women and girls, and must reduce inequalities between women and men,” Union Minister for Urban Development M. Venkaiah Naidu said at the inauguration of a three-day United Nations conference on ‘Safe Cities for Women and Girls – Implementation Essentials’ which began in New Delhi on 10 June. 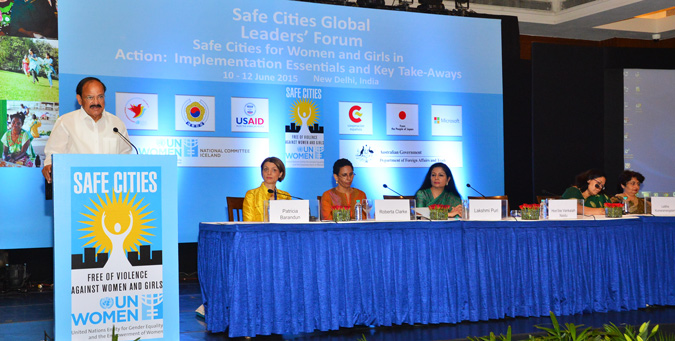 “Urban life poses a number of risks with regard to the safety and security of women. It is important for urban policies to be guided women’s perspectives, to provide not just a safe environment but a whole ecosystem that places the needs of women and girls at the centre of urban development,” the minister said.

Mr. Naidu also referred to the Government of India’s ‘100 Smart Cities Initiative’ in which selected cities will receive funding from the central government to drive economic growth and improve infrastructure and citizen-friendly services. The project “will adopt innovative smart solutions to ensure that cities are habitable and safe.” The planning process must take into account the needs of women and must also be proactive in ensuring that inequalities between men and women are reduced, the minister added. “As India moves toward a Smart City model, it needs smart leadership, including from women.”

The 100 Smart Cities Initiative will be rolled out on 25 June.

The UN Women consultation included more than 120 participants from 24 countries, including from cities where the Safe Cities Global initiative is being implemented. The initiative, launched in 2010, facilitates global commitment to make cities smarter, safer and more sustainable through partnership and collaboration – between residents, government, the private sector and civil society. In New Delhi, one of the first cities to join the initiative, the programme has entered its third phase under a renewed Memorandum of Understanding with the Government of Delhi.

Addressing delegates during the inaugural session of the conference, UN Women Deputy Executive Director Lakshmi Puri called on governments, citizens, the private sector and media to come together and make safe urban spaces for women a reality. “No city can be smart and sustainable if half of its population is not safe and lives in fear of violence,” Ms. Puri said in her remarks to the media following the inauguration. “Safe cities for women and girls must therefore be part of this new urbanization movement and made part of its DNA.” 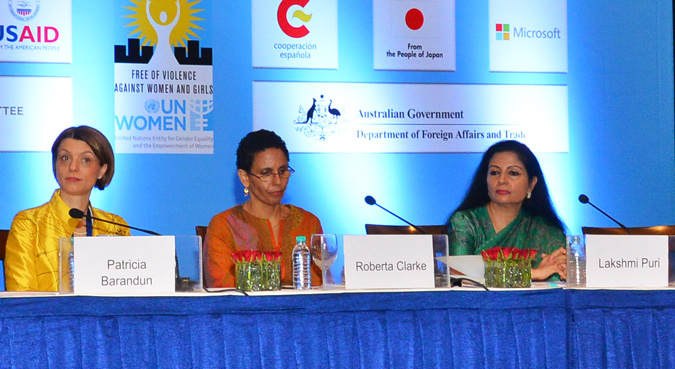 Mr. Lakshmi Puri (first person from the right) during the opening of the Smart Cities are Safe Cities. Photo: UN Women/Sarabjeet Singh Dhillon

Ms. Puri also emphasized the role of national and local leadership in ensuring that women and girls in every city in the world are socially, economically and politically empowered in public spaces, which are free from all forms of violence. “This is key to achieving gender equality by 2030, which is one of the proposed Sustainable Development Goals that will set the global development agenda for the next 15 years.”

In this context, she said, India’s 100 Smart Cities Project could provide a valuable and constructive way forward. “We hope that the Smart Cities Project will fully integrate the perspectives of women and girls and be truly inclusive. And as the various states prepare to nominate their candidate cities, we hope that women’s safety will figure prominently in their proposals.”

Other speakers at the inaugural session included Lalitha Kumaramangalam, Chairperson, National Commission for Women, and Preeti Sudan, Additional Secretary, Ministry of Women and Child Development, Government of India, both of whom emphasised that ‘safe cities’ were not merely about better technology and facilities.

“We must deal with culture, which sometimes suppresses women, if we want to have safe cities, and we can address this in large part through education,” said Ms. Kumaramangalam.

“The idea of a safe city has to do with the mindset, and not just infrastructure,” observed Ms. Sudan. She also referred to the setting up of one-stop crisis centres in hospitals in all districts of the National Capital Territory of Delhi, the universalisation of the ‘181’ hotline, and the integration of the two services.

The substantive sessions of the meeting saw a rich exchange of lessons and experiences by government representatives, research institutions, women’s organisations, mayors, representatives of city authorities, Safe Cities programme supporters and other partners. The themes for the panel discussions included studies on the use of technology to address sexual violence, policy-oriented advocacy and community mobilisation, among others.

UN Women’s Safe Cities Global Initiative includes two main flagship programmes. In 2010, with UN-Habitat and 50 other global and local partners, we launched “Safe Cities Free of Violence against Women and Girls” in Quito, Ecuador; Cairo, Egypt; New Delhi, India; Port Moresby, Papua New Guinea; and Kigali, Rwanda. It is the first-ever global comparative programme that develops, implements, and evaluates tools, policies and comprehensive approaches on the prevention of, and response to, sexual harassment and other forms of sexual violence against women and girls across different settings.