Jakarta, Indonesia – British Ambassador to Indonesia, Moazzam Malik and Deputy Head of Mission New Zealand Embassy in Jakarta, Tredene Dobson, pledge a support to HeForShe, UN Women solidarity movement for gender equality during International Women’s Day commemoration. Moazzam Malik in his speech said: “Men are part of the problem, so we have to be part of the solution,” stating his invitation for men to support the movement. 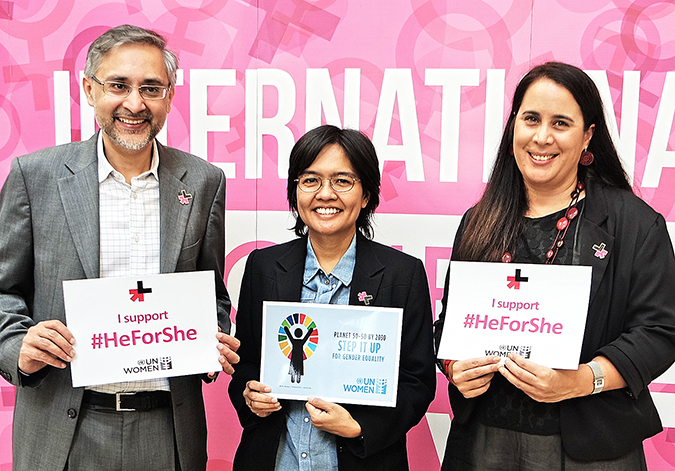 HeforShe is a UN Women’s initiative to engage men and boys as agents of change for the achievement of gender equality and women’s rights. HeForShe has one bold goal, to achieve gender equality by 2030. To accelerate progress toward this target, HeForShe launched IMPACT 10X10X10, a pilot program engaging Head of State, Universities and Corporations to create structural and cultural change to achieve equality. IMPACT 10X10X10 is comprised of 10 leaders across each sector.

Indonesia’s President Joko Widodo is among 8 Head of State IMPACT Champions who have made a commitment to take action for gender equality and bringing positive changes in women’s daily life. As an IMPACT Champion, President Joko Widodo will focus on efforts to increase participation and representation of women in decision-making processes, reduce the maternal mortality rate, and eliminate violence against women and girls.

The event organized by British Embassy and New Zealand Embassy in Jakarta, on occasion of the International Women’s Day. The event featured a brief introduction of HeForShe Campaign by Lily Puspasari, Officer in Charge UN Women Indonesia and a talkshow on a Role for Men in Women Empowerment.

Related News
11/08/2021
ASEAN-Japan sports figures and young leaders convene for gender equality in sports
10/05/2022
In an Indonesian province, the people devise a gender-responsive action plan for peace
11/04/2022
Take five: “We need to strengthen women’s voices, leadership and access to decision-making in promoting peace”
18/03/2022
Indonesian Women Entrepreneurs Champion Gender Equality in the Workplace, Marketplace and Community as WEPs Ambassadors
09/03/2022
Ring the Bell for Gender Equality Calls for Women's Leadership for an Equal and Sustainable Future
END_OF_DOCUMENT_TOKEN_TO_BE_REPLACED