Getting the post-cyclone response right for women in Fiji 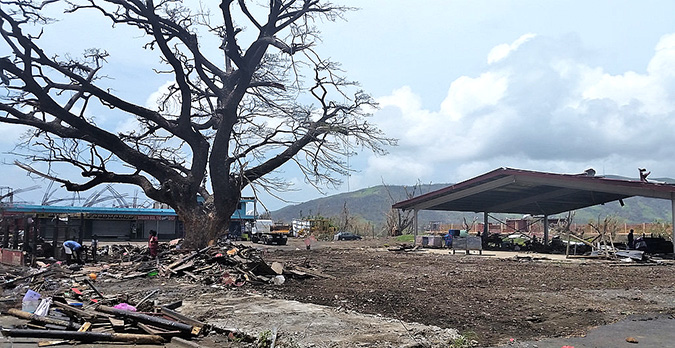 This is what is left of the Rakiraki Market, which used to house more than 200 vendors, 75% of them women. UN Women has provided tents, tables and chairs to serve as a temporary market space so that vendors have somewhere to sell their produce while the market is rebuilt. Photo: UN Women/Anna Parini

A Category 5 cyclone pulls root crops out of the ground long enough to fill the holes beneath them with water so that whatever hasn’t been scattered rots; it sends flash floods and storm surges roaring through villages, sweeping away people and their belongings; it turns villages into piles of debris and roofing iron into a deadly weapon.

Similar to other disasters, a Category 5 cyclone has another legacy. It exacerbates existing inequalities. Not only are women and girls more likely to get injured or killed in a disaster; in the aftermath they also experience an increased risk of violence, an increase in their burden of work, and decreased opportunities to earn an income.

Consequently, when disaster hits and the humanitarian response kicks into gear, one of the biggest challenges is ensuring that different groups in society, including women and girls, have equal access to relief supplies and services, and that the needs of the most vulnerable are fully integrated at every level of response and recovery.

I was working in Myanmar when Cyclone Nargis swept through the Irrawaddy Delta in May 2008. It was a disaster of massive proportions, and I was assigned to lead on women’s protection. However, at the time, women’s protection actors were not as visible and coordinated as child protection agencies and had weaker foundations with the Government to build on. As a result, I found it very difficult to advocate effectively for women in the immediate response. Nargis was a strong lesson which always stuck with me—the sting of us not quite getting it right for women.

Cyclone Winston hit Fiji on 20 February this year. The strongest cyclone ever to make landfall in the Southern Hemisphere, it impacted 40 per cent of the population—half of them women and girls.

While it’s essential to move fast in the aftermath of such a disaster, a lack of coordination between the wide range of actors involved in response can cause even more harm; some people and needs get attention from multiple corners, while others fall through the cracks. To stop this from happening, the Fiji Government activated the cluster system. Each cluster is responsible for coordinating efforts to meet a different need, such as shelter or health, bringing together Government departments, UN agencies, NGOs and community groups with the most relevant resources and relationships to not only identify the gaps, but also to fill them. 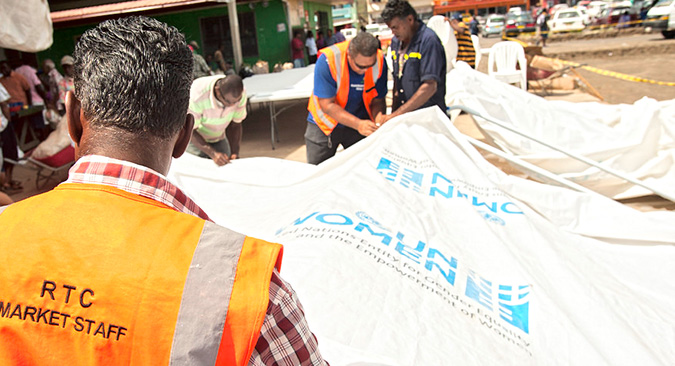 Almost two weeks after Tropical Cyclone Winston hit Fiji, eight families from Buka settlement, near Rakiraki, are living at the Korotale Narara Kindergarten while they try to rebuild their homes. Roll call is kept on the kindergarten's blackboard. Photo: UN Women/Murray Lloyd

The Safety and Protection Cluster is responsible for ensuring that the needs of the most vulnerable groups in society, including women and girls, are met—whether it’s putting in place measures to lower the risk of sexual violence or ensuring that agricultural support also reaches women subsistence farmers. In Fiji, this cluster is led by the Ministry of Women, Children and Poverty Alleviation, with UN Women and UNICEF as co-leads; the Ministry is also leading the Gender-based Violence in Emergencies sub-cluster, with UN Women as co-lead. It is the first time UN Women has taken a leadership role in the cluster system.

It’s been an immensely positive experience, of women’s and children’s protection actors working well together, as well as with advocates for people with disabilities, and LGBTI populations—all with a strong Government Ministry in the lead.As a cluster it’s vital to understand the protection concerns of the people affected by the cyclone to ensure the best use of scarce resources, such as temporary shelters, making sure the goods and services we have to distribute go to those most in need. It’s also important that people in crisis have a clear, simple process for describing their needs and concerns, rather than having to repeat themselves to a number of different agencies.

Through UN Women and UNICEF’s support to the Ministry, the Safety and Protection Cluster is conducting a large-scale multi-partner protection assessment in affected areas—the only cluster to do so. Assessment teams made up of representatives from UN agencies, government, international and national NGOs are collecting information from affected areas, in order to form a common understanding of what and who to prioritize, and pinpoint gaps. The relationships, networks and level of trust UN Women and UNICEF have built through existing programmes with Government and partners in Fiji have given us a strong foundation to work effectively together rel="noopener noreferrer" in times of crisis. 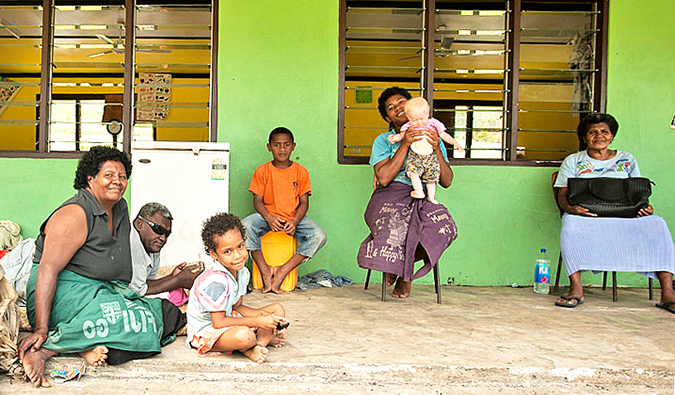 Putting up the tents, tables and chairs provided by UN Women to serve as a temporary market space in Rakiraki. Tropical Cyclone Winston destroyed the market building, depriving hundreds of vendors, most of them women, of a place not only to earn a living, but also to support each other emotionally as they recover. The tents, tables and chairs were provided through UN Women's Markets for Change project, which is funded by the Australian Government. Photo: UN Women/Murray Lloyd

When it comes to UN Women’s own response, we have built on our partnerships with government ministries, service-providers, local organizations and market vendors to provide immediate assistance. The generator we bought for an NGO helped keep their helpline going; funding a new roof for a gender-based violence service-provider ensured their drop-in service continued uninterrupted; our work with the Ministry for Local Government has provided temporary market spaces; and our partnerships with FAO and the Australian Government will provide tools and seeds to help women market vendors replant. In the longer term, as we move from response to recovery, we’re working with the Ministry to help rebuild destroyed marketplaces and accommodation centres for female vendors.

There’s a proverb that if you want to go fast, go alone, but if you want to go far, go together. I think this has characterized the Winston response. As a result, for the first time in Fiji, survivors of violence have a clear national referral pathway to help them access the support and services they need from any organization– from medical treatment to counselling to reporting. It’s just one of the lasting tools developed through the cluster that are relevant in both a disaster and in normal times, as we look to make humanitarian action more people-focused and inclusive—and fundamentally more effective.

It has been challenging and has required intense cooperation, negotiation and sheer hard work. But I feel UN Women has helped make a difference for women in a time of great need, while at the same time demonstrating the value we can add to disaster response, both on the ground in affected communities, and within the formal coordination system. And for me personally, it’s been a chance to learn from the past and to be part of reshaping the system to get it right for women.

Aleta Miller is the Representative for UN Women’s Fiji Multi-country Office. A Clinical Psychologist with a Master’s degree in International Public Health, she has worked for the UN, national governments and NGOs across Asia, the Pacific, Eastern Europe and Central Asia. She reflects on UN Women’s coordination role in the response to Cyclone Winston, using protection to drive gender equality and address vulnerability.

Related News
17/09/2018
Press release: Emergency Preparedness, Response and Recovery Project for Palau
02/10/2017
Diverse and Local Humanitarians Essential for Disaster Preparedness and Response
22/02/2017
Fijian community organizations leading response
19/08/2016
Gender and Protection Paving the Road for Humanitarian Response in the Pacific
18/08/2016
Disasters: What’s gender got to do with it?
END_OF_DOCUMENT_TOKEN_TO_BE_REPLACED