Suva, Fiji – Time and time again, it has been shown that in the aftermath of a disaster, women and girls face even higher risks of violence than they do under ordinary circumstances. 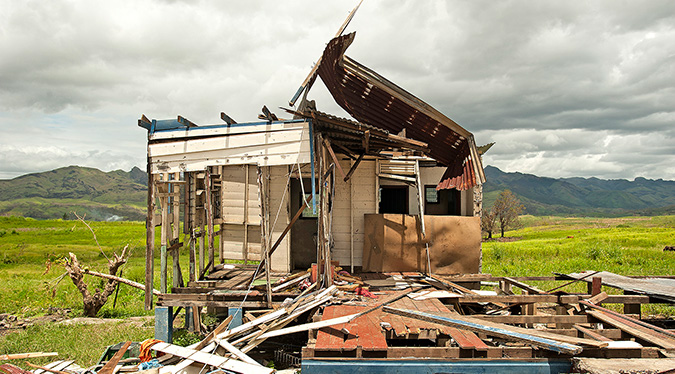 While the physical devastation caused by Tropical Cyclone Winston is obvious, the psychological damage is harder to see and takes longer to emerge. Photo: UN Women/Murray Lloyd.

The damage – whether it is physical or psychological – is often much harder to see and takes longer to emerge, for many reasons, including the shame and stigma that surrounds reporting such violence.

Tropical Cyclone Winston is no exception, with reports of violence and exploitation of survivors beginning to come in. Through the cluster system, the Fiji Government, service providers, NGOs, and UN agencies are working hard to ensure that measures are taken across all sectors of the response to prevent violence against women and girls, as well as that good processes are in place for properly responding to and referring cases when they do occur.

“Violence against women and girls is an issue that cuts across every area of society and this is also true for the response,” says Aleta Miller, UN Women’s Representative in Fiji. “Within every sector there are risk factors that must be managed and measures that must be put in place to protect and support women and girls.”

Fiji Women’s Crisis Centre (FWCC) is one of the organisations providing training and technical support to first responders, and counselling for survivors.

Coordinator Shamima Ali says that while response efforts often focus on the physical damage rather than the human side, especially for women, she is largely pleased with the way the response to Winston has factored in the risk of gender-based violence, including prevention.

Ms Ali says FWCC has been able to share tools to help in the response, including a code of conduct for response workers, and a referral pathway that gives guidance on how different cases of violence against women should be handled.

FWCC is also providing training to help those working on the frontlines of the response recognise the signs of violence and how to respond. The workshops also provide an opportunity for the trainers and participants to discuss and share their experiences from the field, as well as what they are encountering when working in the worst affected areas.

The first of such workshops was recently held in the Western Division, involving representatives of the government, Fiji Red Cross, Empower Pacific, the Aspire Network and others working in affected communities. Further workshops are planned over the coming weeks.

UN Women provided FWCC with funding in the early days after Tropical Cyclone Winston hit to help ensure their clients in affected areas have access to relief supplies and safe homes. Further funding is being provided to continue training, outreach and awareness, and response services during the emergency phase.

Ms Ali points out that the ability to distribute supplies targeted to women is particularly important.

“We are seeing lots of women with health problems now – including bad headaches and painful menstruation. While we can initially provide them with Panadol for pain relief and sanitary products, we also make referrals to other organisations who can help them with treatment.”

She adds, however, that this work is complicated by the fact that the health centres that cater for women are not all running normally again due to damage or staff shortages.

UN Women’s Representative for Fiji, Aleta Miller, says the services provided by FWCC are crucial for women and girls across Fiji, especially in the aftermath of a disaster.

“Many of these women are survivors of some sort of violence and are trying to get their lives back. Helping them with water, shelter, medications, sanitary needs and essentials for their children can make a positive difference in their recovery,” says Miller.

Both Ms Ali and Ms Miller agree the recovery after Winston will be long and the issues facing women are complex.

“FWCC’s work is part of a wider, united effort to make sure that the legal protection and support that women need do not take a back seat, not only during the response and recovery, but also in the longer term,” Ms Miller says. “UN Women is proud to be part of this effort and to support organisations like FWCC in ensuring that women continue to access the services and support they need.”