Disasters: What’s gender got to do with it? 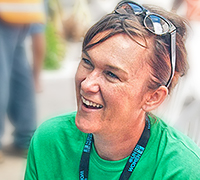 Even disasters discriminate. More women die in disasters than men. Women face even greater risks of violence in the aftermath and their ability to make an income is often more affected. They end up caring for even more people – other people’s children, the elderly, the injured. Considering this reality, and on World Humanitarian Day, we have to ask ourselves: Where are the women’s voices in disaster planning, response and recovery in the Pacific? Can you hear them?

The Pacific is a region made up of beautiful island nations, but it is also a part of the world that bears the brunt of disasters, including earthquakes, volcanoes, floods, tsunamis, droughts and cyclones. In the past 18 months, we have seen two massive cyclones rip through Vanuatu and Fiji, leaving a trail of devastation; homes and livelihoods destroyed, crops wiped out, no clean water, insecure food supply, overcrowded living conditions in evacuation centres and in the homes of family and friends, and physical and emotional trauma.

On top of this, there are other real risks that are harder to see. Both the risk of domestic violence and the incidence of sexual violence and exploitation increase in the aftermath of a disaster, largely due to the inability to provide protection for women, children and vulnerable groups during a disaster, and compounded by the additional pressures on families. 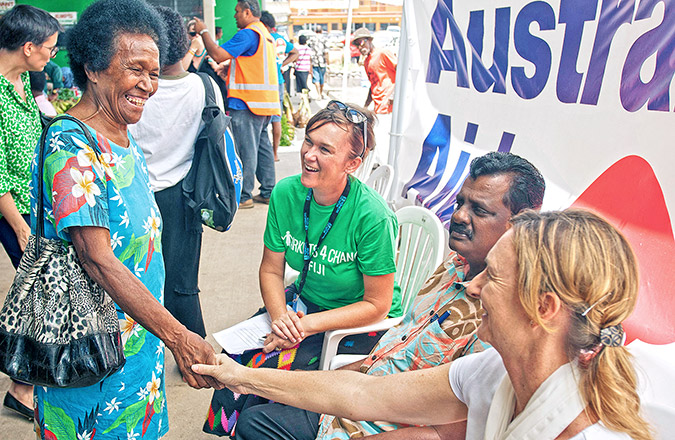 UN Women’s Aleta Miller with Hon Parveen Bala Kumar (Fiji’s Minister of Local Government), and Suzanne Bent (First Secretary of Gender Equality for Australia's Department of Foreign Affairs and Trade in Fiji) in Rakiraki at the handover of tents that act as a temporary market space while the new market house is being built. Photo: UN Women/Murray Lloyd

Each year brings with it another cyclone season. No one can predict when the next Pam or Winston will strike, so we need to talk about disasters. And we need to talk about gender, and the different ways disasters affect women, girls, men and boys. What can we do to prepare and respond in a way that acknowledges and addresses these differences?

Globally, women experience discrimination, harassment and violence in their daily lives and the Pacific is no different. In a disaster, people are pushed to their limits and their existing coping mechanisms are put under what can be unbearable pressure, while normal protection mechanisms, including law and order, sometimes break down. It’s vital that in our genuine desire to “help” we don’t add to this stress, exacerbate existing vulnerabilities and discrimination, or inadvertently undermine existing support services and protection mechanisms.

We work with women who are leaders in their communities. They know their neighbours, their land, their communities, their family and their own needs, and their voices are critical in the planning and decision-making on disaster preparedness and response. Leveraging women’s leadership, networks and knowledge, and ensuring women take leadership roles in disaster planning and response will lead to better outcomes for women, and girls, but also men and boys. It’s a win-win, so why is it not happening? 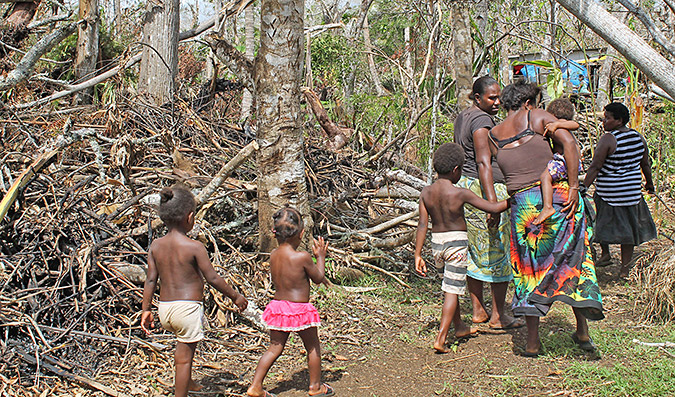 Shaline Nimal walks through what is left of the village of Rangorango on Efate island, Vanuatu. She and the other women rely on income earned through selling their produce, all of which was destroyed by Tropical Cyclone Pam. Photo: UN Women/Ellie van Baaren

Globally we have been moving in a more gender inclusive direction, but it’s not enough. We too quickly give in to tokenism, talk too much about “vulnerability”’ and not enough about strength, and often focus on consultation rather than representation. We need to get beyond the fly-in experts, the smart technology, apps, drones, and “innovative approaches” that are not always well thought out or appropriate for the context.

Every disaster is different and we need to be flexible enough to deliver what’s needed on the ground, and to deliver it in a way that ensures it gets to those who need it most. We need to be not only informed by, but led by, the people most affected. We need to return to the planning stages with meaningful participation in the decision-making processes for women, men, girls, boys, the young and the elderly, people with disabilities and the LGBTI community.

Humanitarian action will be stronger and better informed when those who are most vulnerable define their own role in a response, and define their own needs and the protection they require from that response.

We cannot wait until all hell breaks loose to have this cxonversation; that’s not a recipe for creating an open, inclusive and honest space.

Women are resilient, strong, and are already agents of change. We need to recognise that and make space for women at the planning and decision-making tables so they can speak for themselves about their experiences, needs and ideas, and know that those inputs are valued. There is no alternative: Women must be equal partners at every level and we all have a role to play in making that happen.

Aleta Miller is UN Women Representative at the Fiji Multi-Country Office, which covers 14 Pacific Island countries and territories. As the Pacific Humanitarian Protection Cluster lead, UN Women is charged with oversight and coordination of gender and protection issues in humanitarian action in the Pacific.

Related News
05/04/2016
Preventing and responding to violence against women and girls is crucial in Winston response
25/03/2016
Finding inspiration amid devastation in Fiji
05/07/2022
In the words of Aileen U. Hualde
13/10/2021
Take Five: “Women are a driving force in disaster risk reduction and emergency response”
10/03/2021
Cash handouts provide lifeline to vulnerable women in Viet Nam facing double impact of pandemic and flooding
END_OF_DOCUMENT_TOKEN_TO_BE_REPLACED