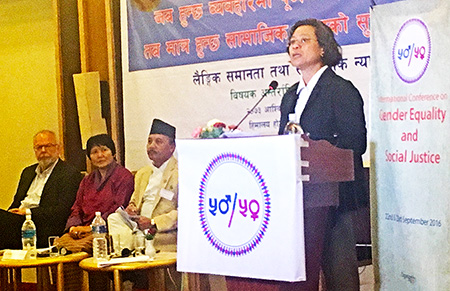 Good afternoon Excellencies and Distinguished Participants. I congratulate the Joint Mechanism for Political Party Support and its partners for organizing a successful event at this very crucial time. My sincerest thanks to the Director of the Danish Institute for Peace and Development, Bjorn Førde for supporting this special event as well as for DIPD’s unfailing support to promote the participation and representation of Nepali women in the public and p olitical realm.

With the launch of the Sustainable Development Goals, we look ahead this year with enthusiasm as we see this generation as the first possibility in which to achieve an end to poverty and gender inequality. However, as our UN Secretary-General has said, we cannot successfully address our challenges if we constrain the potential of half the world’s population. The SDGs provide us with an opportunity to create a world with greater equality for generations to come. However, we cannot win when only half of us benefit. In his opening remarks yesterday, Bjorn made reference to Tahrir Square and recalled the question of whether events in Egypt were to launch the 4th Wave of Democracy. The course of subsequent developments proved this would not be so but, ladies and gentlemen, we understand that peoples’ movements are born from exclusion and that when people take to the streets, it is usually because their voices have not been included or heard in the halls of decision makers.

How then will we reach our ambitious goal of a transformed world with social justice and gender equality by 2030?

This conference is one important step on a road which requires dedicated political will and unwavering leadership; increased investments in the agenda for women and girls; and strong accountability that is backed by the full engagement of civil society.

Gender equality is indeed a shared vision of social justice and human rights.

Since the promulgation of Nepal’s new constitution last year, there has been notable progress in women’s participation and leadership in the political realm. The global average for women in parliaments is 22 per cent, and in Asia it is 18.50. In the last two Constituent Assembly elections in Nepal, women secured 33 per cent and 30 per cent of the total seats respectively, up from 7 per cent in previous elections. Now is the time to sustain and build on these impressive gains. With the local elections planned, it is widely expected that the political participation and representation of women will be further strengthened.

Worldwide, a larger number of women are increasingly asserting themselves as voters. In growing numbers, they are running for public office. Where women’s representation has increased, change has followed. Progressive laws on women’s rights have been passed—on securing land rights, on ending violence against women, and on improviing health care, reproductive rights and employment conditions. But we are still a long way from reaching the “parity zone” of 40 to 60 per cent.

Increasing the number of women in representation is not about doing them a favor. It is simply what women are entitled to by right. It is also about building a democratic, just society that benefits all members. We do not need to reinvent the wheel for how to do this. As a significant step, we simply need to recommit to implementing what we have already adopted in the forms of the Convention on the Elimination of All Forms of Discrimination against Women (CEDAW) and the Beijing Declaration and Platform for Action. In doing this, we will be well placed to achieve progress on the SDGs.

UN Women is providing support to countries across the world to ensure that more women vote and get elected. We encourage the breaking down of barriers to women’s political participation through temporary special measures. Indeed, quotas are a fast track to changing the political landscape in meaningful, transformative ways. The current president of Chile was UN Women’s first executive director. In her words, Michelle Bachelet said, ‘When one woman is a leader, it changes her. When more women are leaders, it changes politics and policies.’

Translating our words into reality requires hard work and effective action. For change to take place, political parties must act on what is evident: that advancing women is a winning proposition for all. This is because women’s votes count. This is because women in governance make a difference. And ladies and gentlemen, it is also because good governance, social justice, and gender equality are mutually reinforcing. Achieving any one of these goals both feeds and requires the attainment of the other two. Thank you.