Government commits to support campaign for a safe Port Moresby

Port Moresby, Papua New Guinea – It was a sea of orange on Friday November 25th, when more than 500 city residents led by Governor Hon. Powes Parkop braved the sweltering Port Moresby sun and marched to Parliament House to present thousands of signed ‘orange hands’ to Prime Minister Peter O’Neill, signifying personal commitments to make the city, a safe one for women and girls. The march was to honour the United Nations International Day for the Elimination of Violence against Women. 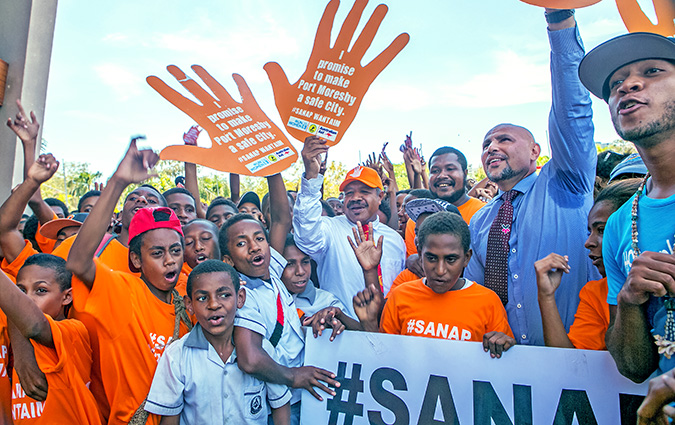 Minister for National Planning Hon. Charles Abel when accepting the pledges on behalf of the prime minister, confirmed the government’s shared passion and commitment in supporting the city-wide solidarity campaign, Sanap Wantaim: The New Normal. The campaign co-funded by the Australian Government and National Capital District Commission (NCDC) is part of UN Women’s Safe Cities Programme.

Mr. Abel said: “You and I demand a new normal. We want a city and country where families and children can move around freely; we want our girls to play in the World Cup and score more goals; we want our daughters to be educated and to be loved and cherished by their husbands just as we love and cherish them.”

“I don’t want empty pledges, I want sacrifices and commitment,” he said.

“As a leader and a father, I commit myself to loving my wife and treating her with respect and providing a good example to my children. I will do my best every day to help build this country, for their future and the children of Papua New Guinea because I am Papua New Guinea. I’ve got to start with me before I blame anybody else. This is my pledge and I accept all the pledges from you on behalf of the government of Papua New Guinea. I see you, I hear you and I recognise all of you. Mi sanap wantaim yu,” Mr. Abel spoke to the crowd at the march.

Governor Parkop said it was important to build a new normal and Sanap Wantaim was an invitation to every Port Moresby resident, whether it would be the perpetrator, survivor, victim or bystander to uphold Human Rights and make a pledge to say, “I want to be a champion against violence”.

“We must show the way, take the lead, shine the light, be the example, so that the rest of the country can follow,” he said.

UN Women Country Representative Dr. Jeffery Buchanan acknowledged the support of everyone including youth groups, juveniles from the Bomana Prison, the U-20 Women’s soccer team, students, civil society, the media and others who have been a part of the campaign and said there was a need to get the “new normal” out to the rest of Papua New Guinea (PNG).

“It not about Port Moresby city only, but the rural areas too,” he said. “We are about gender equality and the empowerment for women in PNG.”

Dr. Buchanan when thanking the Wardstrip Primary School students said; “You are the new normal… here are our examples; including our women’s soccer team, travelling the world and standing up to make Port Moresby safe for our women and girls.”

Captain of the U-20 Women’s soccer team Yvonne Gabug and youth representative Bronwyn Kili shared similar sentiments and made commitments to support the campaign.

Meanwhile, UN Women Youth Champion, Jay Lieasi made a public apology to all women and girls who have witnessed or experienced violence in the country.

“On behalf of all boys and men in PNG, I would like to say sorry… for the violence done towards you,” he said.

About the Sanap Wantaim: The New Normal Campaign

An solidarity campaign co-funded by the National Capital District Commission (NCDC) and Australian Government, aimed at inspiring and encouraging Port Moresby residents to stand together in partnership to make it, a safe city for women and girls.

Related News
24/05/2022
Women seeking refuge from violence at UN Women supported safe houses
24/05/2022
A vendor rebuilds her livelihood after COVID 19 lockdowns
03/12/2021
Take five: “Don’t focus on yourself as the leader, but look at others and improve their lives.”
03/12/2021
UN Women helps market vendors in Papua New Guinea rebound from the pandemic
23/11/2021
From where I stand: “Men can positively change.”
END_OF_DOCUMENT_TOKEN_TO_BE_REPLACED