Setting the stage to break the cycle of violence: theatre as an advocacy tool for youth in Solomon Islands

“Dealing with youths, especially students, is very difficult, because when you talk about the issues of violence, domestic violence and sexual abuse, it’s funny to them. They giggle and laugh. But when the drama group actually dramatizes the scene, the mood changes,” says Hendrick Barai, of Family Support Centre’s Advocacy Unit in Solomon Islands. 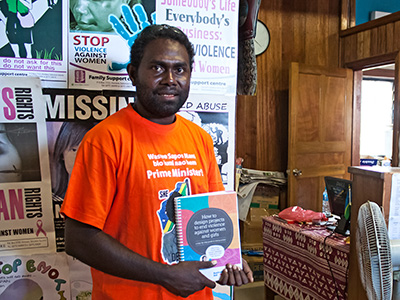 Mr Barai knows all too well, the effectiveness of using drama to convey messages to school-aged children, many of whom are likely to have witnessed violence in their own communities, or have been survivors of violence themselves. One study mapping the extent of family violence in Solomon Islands revealed the interconnected nature of violence against women and child abuse.

According to the study, women who had experienced domestic violence were 4.5 times more likely to report that their child(ren) had been emotionally, physically or sexually abused by their partners, compared with women who had not experienced intimate partner violence.

In Solomon Islands, 37 per cent of girls experience sexual abuse before they turn 15, and as women, 64 per cent are likely to experience violence from an intimate partner in their lifetime. UN Women is supporting civil society organizations such as Family Support Centre to reach out to youth with the aim to help disrupt negative attitudes that condone violence against women and ultimately work towards breaking the cycle of violence.

The roots of violence against women and girls is deeply entrenched in cultural and social norms and the practices which foster gender inequality and gender-based discrimination. Solomon Islands communities are tight-knit. Subjects such as violence against women and girls are often taboo. With funding from UN Women's Pacific Regional Ending Violence against Women Facility Fund (Pacific Fund), Family Support Centre in Solomon Islands have used performing arts as a vehicle to bring sensitive issues to life.

Established in March 2009, the Pacific Fund offers non-government organisations and governments, grants of up to USD 100,000 for violence prevention and response, as well as an extensive capacity building programme. Since its establishment, 49 grants, equating to over USD 2 million have been disbursed across seven Pacific countries. The Fund is supported by the Australian Government.

The performers are comprised of former participants of the Centre’s gender-based violence awareness trainings. Mr Barai says that prior to the trainings the performers knew very little about gender-based violence, but through the project, they have become advocates in their own right. The drama group project, which ended in 2016, created a platform for discussion during school visits. Mr Barai is adamant that theatre, combined with more conventional presentation methods creates greater impact to the students as it allows them to engage more intimately.

This sentiment is echoed by Jully Makini, Coordinator of Family Support Organisation in Gizo. “It’s young people who are going to get married tomorrow… have kids, and continue this life of violence. It’s good to talk to them today, so that’s why I like to go to secondary schools wherever we are.” Family Support Organisation is also supported by UN Women's Pacific Fund, and was set up to raise awareness and provide support to women survivors of violence in Gizo.

In addition to the administration of the Pacific Fund, UN Women's Fiji Multi-Country Office is also coordinating significant interventions to end violence against women, including the Joint Programme on Eliminating Violence against Women and Girls (UN-SIG JP), and the global Essential Services Package (ESP) in the Solomon Islands.