This approach of ensuring the needs of victims, commonly called survivors, are the focus of response services has been a priority for the nine-province rollout of the SAFENET Response and Referral Network (SAFENET). 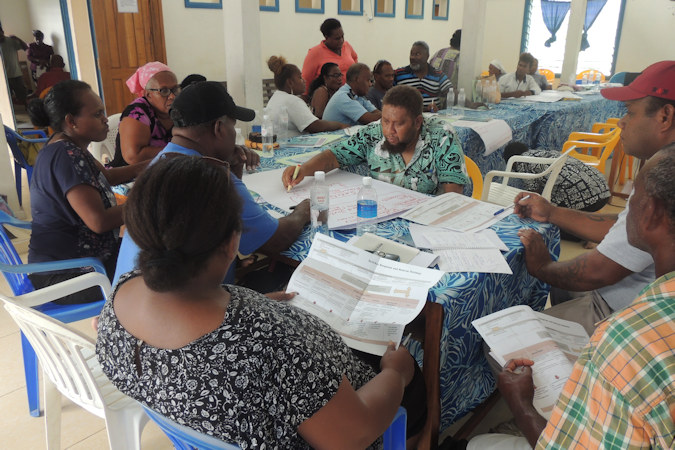 Since late last year, every province in Solomon Islands has hosted consultations between local provincial and village services, and members of the SAFENET network of government and non-government organisations who provide services for survivors of sexual and gender-based violence (SGBV).

The rollout also served as a reminder to rural and remote services that domestic violence is a crime in Solomon Islands punishable by law under the Family Protection Act.

SAFENET is led by the Ministry of Women Youth Children and Family Affairs (MWYCFA), Women’s Development Division in partnership with UN Women - through the Pacific Partnership to End Violence Against Women and Girls (Pacific Partnership) funded by the European Union and Australian Government with support from UN Women.

“It’s been a long journey across all nine provinces, so that together all service providers can improve the way we all provide services to women and girl victims of gender-based violence, especially in rural communities,” said MWYCFA SAFENET Coordinator, Juliana Zutu.

“Domestic violence is a horrific crime that is against the law, and that destroys the lives of women, girls and entire families – so as a nation we need to work together to stop this illegal activity and, at the same time, better support survivors to recover their lives,” said Ms Zutu.

“Of the nine provinces where workshops were held, four provinces have adopted the SAFENET approach and the other five now have a clear understanding of the approach laying the foundation for re-visiting and implementing SAFENET in those five provinces.

There were two phases in the national, nine-province rollout.

Firstly, there were consultations with provincial government, faith-based groups, civil society and other organisations about the SAFENET approach as part of its implementation in Malaita, Isabel, Temotu and Western provinces, from November 2018 to March 2019.

The second phase was completed by July 2019, focussing on consultations with locally-based services in each of the remaining five provinces, to introduce them to SAFENET and to lay the foundations for a possible future implementation.

“The past months have been incredibly important for rural and urban service providers to come together and agree on ways we can provide access to better services and support for women and girls victims or survivors of gender-based violence,” said Miss Zutu.

“This focus on having a survivor-centred approach is clearly outlined in the SAFENET Guidebook of Standard Operating Procedures for the Multisectoral Response, Referral and Coordination of Sexual and Gender Based Violence (GBV), that has been central to the provincial consultations.

“The project builds on many years of work by MWYCFA and the SAFENET network, with ongoing technical guidance and support from UN Women, which this year continues through the new Pacific Partnership to End Violence Against Women and Girls thanks to funding from the Australian Government and European Union,” said Miss Zutu.

The Pacific Partnership works in collaboration with UN agencies and partners, building on previous joint programmes such as the UN-Solomon Islands Government Joint Programme and the United Nations Joint Global Programme on Essential Services for Women and Girls Subject to Violence (Essential Services Package or ESP). The ESP was piloted worldwide, including in Solomon Islands and Kiribati with support from UN Women and the United Nations Population Fund (UNFPA) with funding from the Australian Government.

SAFENET aims to better coordinate the various government and non-government frontline response services – from police to hospital, legal and faith-based services – to provide the best possible survivor-centred response, referrals and ongoing support to women and girl survivors of violence.

For information on funding and support for SAFENET and Pacific Partnership in the Solomon Islands:

Related News
11/06/2020
Across the Pacific, crisis centres respond to COVID-19 amid natural disasters
06/09/2019
National support for better counselling and support for domestic violence victims
22/07/2019
Improving support for women and girl survivors of sexual and gender-based violence
08/05/2019
Solomon Islands launch of the new Pacific Partnership to End Violence Against Women and Girls
08/05/2019
Provincial services gather in Honiara to improve support for women and girl victims of sexual and gender-based violence
END_OF_DOCUMENT_TOKEN_TO_BE_REPLACED