Some 500 people took part in East Timor's first-ever pride parade: "The sense of euphoria ... It reminds me of Independence Day in 2002"

Kuala Lumpur, Malaysia — Marching through the streets of East Timor's capital Dili with a rainbow flag in his hand, Natalino Guterres was overwhelmed with emotion, reminding him of how he felt 15 years ago when he saw the Timorese flag raised for the first time.

Participants pose for a photo at a pride parade in Dili, East Timor on June 29, 2017. Photo: UN Women/Felix Maia

"It was an emotional moment," he said of the pride parade.

"The sense of euphoria ... I saw happiness written on people's faces and some teared up. It reminds me of Independence Day in 2002."

Guterres was among some 500 people taking part in East Timor's first-ever pride parade. The atmosphere was carnival-like, with participants waving colourful rainbow flags, cheering and beating drums in the capital.

Campaigners say the parade last month was a milestone for the tiny, half-island nation - Asia's youngest democracy - and a beacon of hope for a region where lesbian, gay, bisexual and transgender (LGBT) rights are under increasing attack.

LGBT rights in the nation of 1.2 million people have not been a major focus. International headlines about the country have been dominated by its 24-year resistance to occupation by neighbouring Indonesia, which eventually led to East Timor's independence in 2002.

However activists say social stigma and discrimination are common for LGBT people.

Same-sex behaviour is not criminalised under East Timor's laws but they also do not offer protection against discrimination.

KICKED OUT OF HOME, BULLIED AT SCHOOL

Guterres, a development consultant who runs a youth group that organised the parade, said many like him grew up feeling "lonely" and do not know where to turn when they suffer discrimination.

"If you talk to the (LGBT) community, people have been kicked out of home or feel uncomfortable about going to school because they are bullied. They live from house to house because they are not accepted at home.

"That is why visibility of the LGBT community is important. We want to empower people who are still struggling," the 27-year-old told the Thomson Reuters Foundation by phone from Dili.

Prime Minister Rui Maria de Araujo gave a boost to LGBT rights supporters when he recorded a video message ahead of the march urging Timorese to create an inclusive nation, and accept people with different sexual orientations and gender identities.

Participants pose for a photo at a pride parade in Dili, East Timor on June 29, 2017. Photo: UN Women/Felix Maia

The call was a "welcome glint of leadership amidst officials elsewhere in the region who openly stoke anti-LGBT bigotry", said Kyle Knight, a LGBT rights researcher with New York-based Human Rights Watch.

Although Taiwan's top court ruled in favour of same-sex marriage in May, paving the way for the island to become the first place in Asia to legalise gay unions, progress of LGBT rights elsewhere in the region has been slow.

In neighbouring Indonesia, the LGBT community has faced a series of attacks since last year with senior officials saying there is "no room" for gay rights movement, while authorities detained 141 men in a gay club raid in May.

In the same month too, two young Indonesian men were publicly flogged for gay sex in the ultra-conservative Aceh province which has Islamic laws.

In Malaysia, health authorities prompted a public uproar last month over a video contest on how to "prevent" homosexuality, and were forced to amend the competition.

But Knight said East Timor could still offer more to the LGBT community by enacting laws to outlaw discrimination based on sexual identity.

The parade - which was supported by international groups including U.N. agencies and diplomats - has nevertheless raised hopes among the LGBT community in East Timor, and provided an impetus for the public to debate the topic.

"LGBT issues have been swept under the carpet all this while, now it is time to talk about them," said Felix Maia, the spokesman of U.N. Women in East Timor, who was at the parade.

"It creates polarising opinion but we can only start raising awareness when people start talking about it," he told the Thomson Reuters Foundation.

Guterres said there is a long way to go to achieve equality but he was optimistic, as he has seen how his family attitude has changed over the years.

His brother, who stopped talking to him for two years after Guterres came out to him as gay, showed up at the pride parade clad in a T-shirt emblazoned with the slogan "You are not alone" and appeared on stage with him.

"He hugged me on stage and told me he was very proud of me," he said. "We were both in tears." 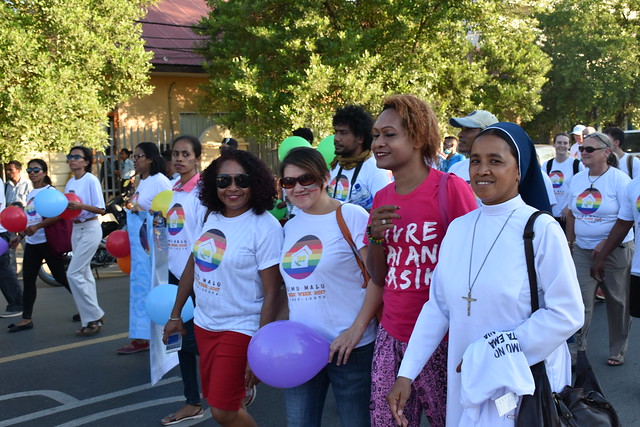 This story has been written by Beh Lih Yi  and edited by Belinda Goldsmith; and originally published on the Thomson Reuters Foundation, the charitable arm of Thomson Reuters, that covers humanitarian news, women's rights, trafficking, property rights, climate change and resilience. Visit http://news.trust.org for more information.