“In our view, the lawmakers have begun to understand their duty and obligation to integrate CEDAW in laws and policies”.

Dili, Timor-Leste – “CEDAW has already born some fruits in Timor-Leste,” said Laura Pina, Director of the non-governmental organization Pátria, during the National Results Sharing on the Regional Programme on Improving Women’s Human Rights in Southeast Asia (known as the CEDAW SEAP Phase II Regional Programme of UN Women). “In our view, the lawmakers have begun to understand their duty and obligation to integrate CEDAW in laws and policies”.

Launched in 2011 across seven countries in the region, with the financial support from the Government of Canada, the five-year programme focused on raising awareness of the Convention on the Elimination of All Forms of Discrimination against Women (CEDAW) and galvanizing actions for change in laws and policies, women’s access to justice, and monitoring of progress made and challenges that persist. Highlighting the importance of the programme, judge Maria Natércia Gusmão, the Acting Chief of Judge for the Court of the Appeal, Timor-Leste’s highest court stated that, discrimination against women is putting women at risk of different crimes among other consequences. She noted, “When there is not women’s participation in the society, in particular when it comes to equality between men and women, we cannot talk about development in our country.”

UN Women’s work with the justice system in Timor-Leste has been one component for upholding women’s rights in the young nation.

Nelinho Vital, National Director of Judicial and Legislation Advisory of Ministry of Justice noted, “The Ministry of Justice has been collaborating with UN Women for many years, through analytical work on various legislation and to empower our judges, prosecutors, public defenders, and lawyers on the issue of women’s rights.” Mr. Vital continued, “From a few weeks ago until yesterday, the Ministry of Justice has presented various draft laws to the Council of Ministers. The proposed laws included the draft for the Land Law that specifically mentions the equal rights enjoyed by both men and women, including the right to own land.” The draft of Land Law had been approved by the Council of Ministers.

At the same time, “Translating laws into change for the lives of women on the ground does not happen automatically with the passage of gender relevant laws,” said Janet Wong, UN Women Country Representative in Timor-Leste, in her remarks. “Change in women’s lives is a continuous process which requires a concerted and collective effort of all stakeholders,” she continued.

One such effort is a gender and law expert group bringing civil society and Government partners together Ms. Pina recalled, “UN Women has provided us with technical support through training to build our capacity to analyze and identify any gender gap that existed in the government policies”.

In this event, Pina was joined by over 40 UN Women partners, representing Government officials, the courts, national human rights institutions, NGOs and UN Agencies who came together to share their experiences and identify new areas of collaboration to further promote women’s human rights in Timor-Leste.

Since Timor-Leste gained its freedom in 2002, it has made significant progress in its commitments to gender equality. Its Constitution specifically calls, not only for equality between women and men in all areas of family, political, economic, social and cultural life, but also for non-discrimination on legitimate grounds, including gender. The State ratified CEDAW and its Optional Protocol without any reservations; passed the Law against Domestic Violence in 2010, and National Action Plan on Gender-Based violence in 2012, among other commitments to promoting women’s human rights.

Symbolizing the progress made and efforts that must continue, Pina concluded that the positive changes and good results we are now seeing, is due to CEDAW as the framework. It had given us strength to begin a new culture, starting from our family. “With continuing efforts from us, it will continue to bear more and better fruits for Timor-Leste, provided that, like any other fruit, we must continue to give it water (nourishment) often.” 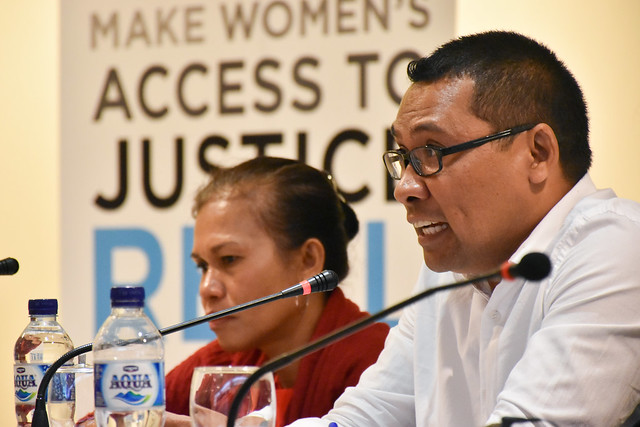