Bangkok, Thailand — Most sexual assault victims in Thailand and Viet Nam face serious challenges obtaining justice, in part because discriminatory attitudes and practices push them out at every stage of the justice process from initial reporting to trial, a new United Nations study has found. 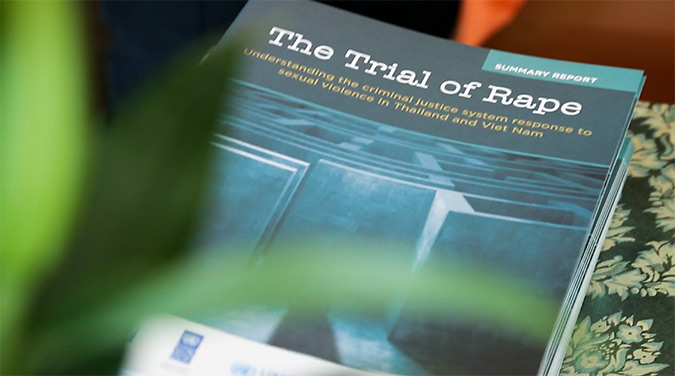 The 109-page study, 'The Trial of Rape: Understanding the criminal justice system response to sexual violence in Thailand and Viet Nam,' was released today by UN Women, United Nations Development Programme (UNDP) and United Nations Office on Drugs and Crime (UNODC). It is the first such comparative study in the Asia-Pacific region.

The study analysed how the criminal justice systems in the two countries respond to reported cases of rape and sexual assault of women. In total, the researchers reviewed 290 police or court case files and interviewed 213 people including government officials, judicial personnel, civil society activists, and providers of services to survivors.

The study focused on better understanding of attrition -- the process by which cases fail to proceed through the justice system, from the stage of filing the initial complaint, to investigations, to the decision whether to prosecute, and finally to the trial stage. It found that sexual assault survivors face significant societal, legal, and institutional policies and practices contributing to high attrition rates. These include stereotypes about sexual assaults and how survivors are expected to look and behave, informal settlements of complaints, frequent insensitive treatment of victims, and prolonged court proceedings which are often not sensitive to the traumatic experiences that sexual assault survivors endure.

The report was released at an event at Dusit Thani Hotel, Bangkok, Thailand. In the report, Nidd , a Thai rape survivor, bravely spoke about her attempt to successfully obtain justice, "I had to go through all the painful experiences," she said. "It was a complex process. I could not understand most of the legal documents that were sent to me, such as the letter from the prosecutor's office and the court. The system is not women-friendly. But I couldn't surrender just because of that. I continued to fight for my rights, for the justice that I deserve." 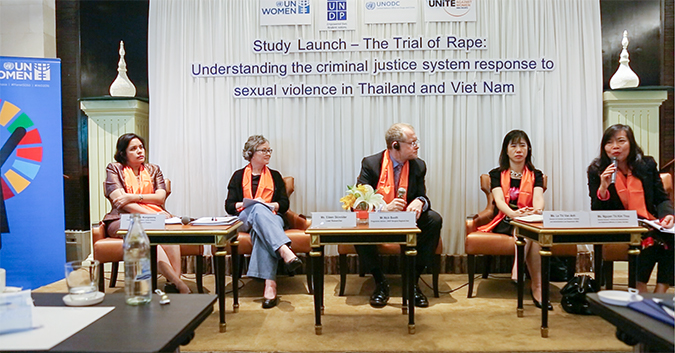 Anna-Karin Jatfors, Deputy Regional Director of UN Women’s Regional Office for Asia and the Pacific, said: “The study found that there are pervasive barriers to justice for survivors of sexual assault that stem from not only difficulties in getting assistance, but also in the attitudes and biases of the police and justice officials tasked with providing assistance. Understanding what the barriers to justice are is a crucial first step to delivering justice to women and ending the widespread impunity in sexual violence. We hope this study will become an entry point for change in both countries.”

Valerie Cliff, UNDP’s Deputy Regional Director for Asia and the Pacific, said: “Sexual violence is one of the most serious human rights violations women face, and it must be a priority for justice systems. This study highlights the limitations in referral networks and coordination mechanisms within the justice system, and with health and social welfare services, which prevent survivors of sexual violence getting the justice they deserve. Joined-up justice services are essential to overcome the challenge of impunity.”

Claudia Baroni, UNODC’s Drug Control and Crime Prevention Officer, said: “Addressing gender-stereotyping and gender biases in the justice system is critical to solve this issue. Decisions by the police and judicial actors should be based on an unprejudiced consideration of the evidence presented and not on biased attitudes about women, such as beliefs that some women may deserve to be raped, or that a rape might be the woman’s fault. Ensuring well-functioning justice systems is not only a prerequisite for ensuring gender equality and women’s empowerment, but is essential for the rule of law and for sustaining just, peaceful and prosperous societies for all.”

The findings of this study reveal that the main factors in reported rape cases contradict several commonly held myths and beliefs about rape. These findings have important implications related to how justice systems handle sexual crimes and approach victims of sexual violence. Strong engagement from the Governments of Thailand and Viet Nam in the research, thereby improving our shared understanding of the barriers in the administration of justice and where to focus efforts to address them, is a key strength of the study.

Snapshots of key findings from the research, are as follows:

* Victims used in the full report, the summary or in the press release irrespective of the outcome of the case, so includes complainants. Victim means a person recorded as the victim of sexual offence, including those cases subsequently deemed no offence or false allegations. The term "victim" used as this is the common terminology for analysis of criminal justice data and is not intended to negate other terms such as "survivors".

UN Women, or the United Nations Entity for Gender Equality and the Empowerment of Women, works to eliminate discrimination against women and girls, to empower women, and to achieve equality between women and men.

UNDP connects countries to knowledge, experience and resources so people can build a better life. It helps countries attract foreign aid and use it effectively. In all its activities, UNDP promotes gender equality and human rights.

UNODC is a global leader in the fight against illicit drugs and crime. UNODC integrates a gender perspective in its work, particularly in its projects to provide alternative livelihoods and to stop human trafficking.

In support of this civil society initiative, each year, the United Nations Secretary-General's campaign UNiTE to End Violence against Women (UNiTE) calls for global action to increase worldwide awareness and create opportunities for discussion about challenges and solutions of ending violence against women. UNiTE is an UN interagency campaign, with UN Women as the coordinating agency. In 2010, UNiTE Campaign launched the regional campaign in the Asia-Pacific region. In recent years, the UNiTE campaign has utilized the colour orange as a unifying theme running through all of its global activities. Orange is one of the official colours of the UNiTE campaign, as conceptualised by the Asia-Pacific UNiTE Youth Network. In the context of its global advocacy, the orange colour used as a symbol of a brighter future without violence against women and girls. 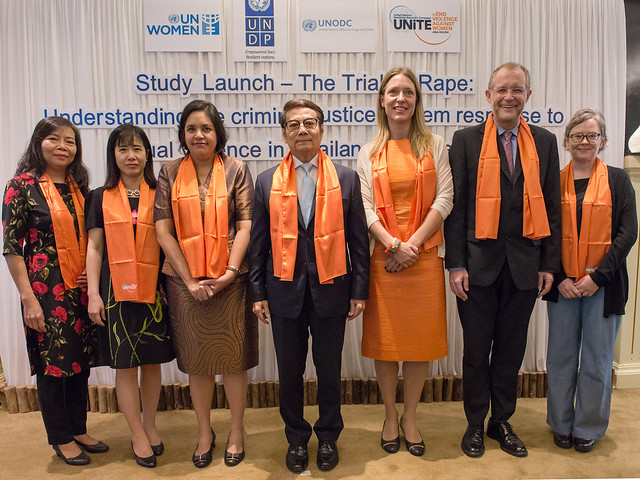 Related News
22/12/2021
In the words of Police Lieutenant Colonel Melbeth Mondaya: “Protection and education for girls is especially important because they are the key to women’s empowerment.”
22/12/2021
In the words of Nurrunihar Mohammad: "Women's leadership … is beginning to be recognized"
22/12/2021
Press Release: Ministry Welcomes ICT Boost to Progress Gender Equality in Fiji
20/12/2021
In Cox’s Bazar, gender-responsive policing efforts build trust with Rohingya women and girls
20/12/2021
Joint Statement: UNHCR and UN Women join efforts to protect and uphold the rights of women and girls in Afghanistan
END_OF_DOCUMENT_TOKEN_TO_BE_REPLACED