Four ASEAN sectoral bodies, overseeing women’s and children’s rights, migrant workers, and disaster management, met in Manila today for the first time to discuss the particular challenges facing women migrant workers in crisis situations. Women migrant workers are often the most vulnerable to crises, and have the least access to support services and tools in their host countries.

Manila, Philippines — Migrant women workers in the Association of Southeast Asian Nations (ASEAN) face widespread discrimination and abuse, yet are often cut off from the mechanisms and services that could support them. Better inter-sectoral coordination is needed to protect women migrants and meet their needs. 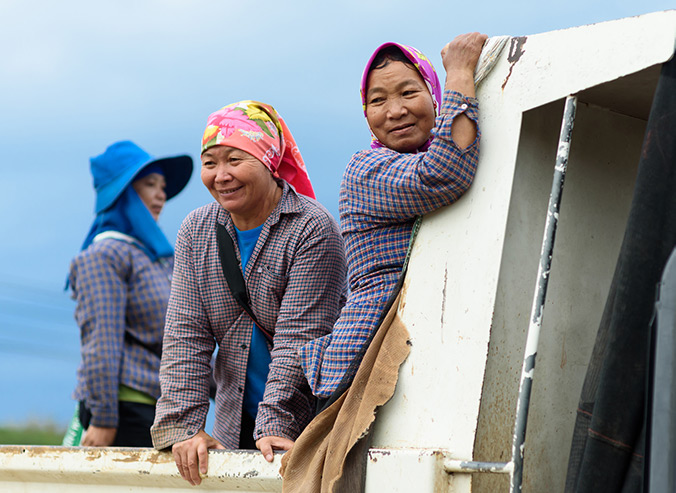 This was the message from the first inter-sectoral dialogue, held on Friday 15 December in Manila, to discuss a scoping study on how to protect and empower women migrant workers, in particular in crisis or disaster situations.

“We need to ensure that all migrant workers can count on the protection of their basic economic, social, cultural and civil rights,” said Anna-Karin Jatfors, Deputy Regional Director of UN Women Asia and the Pacific and Officer-in-Charge. “This includes access to essential services such as education and justice, as well as health services including sexual and reproductive health. And in times of crisis, this means access in particular to effective legal and emergency health services.”

“Only when women have this level of agency can they unlock the potential of migrant work to improve their economic and social circumstances, bringing benefits to their families back home, and to the host communities where they live and work.”

The meeting brought together representatives from four relevant ASEAN sectoral bodies: the Commission on the Promotion and Protection of the Rights of Women and Children; the Committee on Women; the Committee on Migrant Workers; and the Committee on Disaster Management. They met in the Philippine capital to discuss the findings of the scoping study, and to identify possible next steps to remove some of the barriers that women migrant workers run into when trying to access support mechanisms and tools, especially during crises. The research also examined the various difficulties facing women migrants at each stage of their migration journey.

The key findings of the scoping study include:

ASEAN is uniquely placed to help tackle this issue, in particular with regards to financial inclusion and regional coordination. The next steps at an ASEAN level could include a regional insurance mechanism dedicated to migrants in crisis situations, and building a regional coordination platform with support from civil society to help connect women migrant workers with their families back home, and to help coordinate host countries’ response to disasters.

UN Women, or the United Nations Entity for Gender Equality and the Empowerment of Women, works to eliminate discrimination against women and girls, to empower women, and to achieve equality between women and men.

Related News
11/12/2020
You are not alone! Call our helplines. A social worker will be on the other end to listen and help
26/11/2019
Journeys out of the Ordinary | Carina
26/11/2019
Journeys out of the Ordinary | Tasini
18/12/2017
After long years of work overseas, Philippines a migrant goes home and successfully sets up business
16/12/2017
ASEAN inter-sectoral coordination for Women Migrant Workers in crisis
END_OF_DOCUMENT_TOKEN_TO_BE_REPLACED