More support for Kiribati women and children survivors of violence

Fiji — Women and children affected by violence have increased access to services and support in Tarawa with the new Kiribati Women and Children Support Centre opening 31 January.

Women and children seeking assistance can visit the Centre in Bairiki, Tarawa, or phone its 191 Helpline number, or 750 21 000 landline. 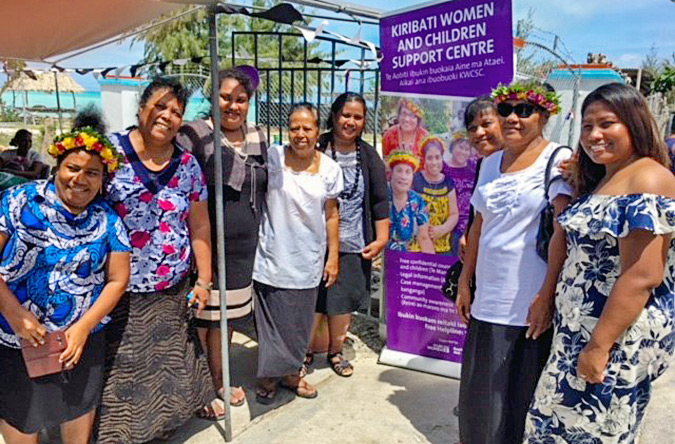 At the official opening of the Kiribati Women and Children Support Centre (KWCSC), the Australian High Commissioner to Kiribati, Mr Bruce Cowled, officially opened the Centre followed by the ribbon cutting and the unveiling of the Centre's Billboard by a senior representative of Kiribati Ministry of Women, Youth and Social Affairs.

The Centre has been developed with support from the Kiribati Family Health Association and funded by the Australian Government's aid program's Pacific Women Shaping Pacific Development initiative, including funding for technical support and training provided by UN Women and the Fiji Women's Crisis Centre.

"I congratulate the Kiribati staff who will be operating the Centre from today. Their roles will be very challenging but with good leadership, capacity building and strong teamwork the Centre will deliver much needed services." Mr. Cowled said.

Coordinator for the Centre, Teretia Tokam, explained that Kiribati has one of the Pacific region's highest prevalence rates of domestic violence, according to a study conducted in 2010 by the Kiribati Family Health Study.

"The goal is to better support women and children who are affected by violence. We want to ensure the Centre provides quality services while ensuring women and children feel safe and confident to come to us and seek support," Ms Tokam said.

"Today's launch has only been made possible because of strong collaborations across many government, non-government, civil society, development and other partners all committed to reducing gender-based violence and child abuse cases at the national, regional and global levels," she said.

Kiribati Country Programme Coordinator for UN Women's Multi-Country Office (MCO) based in Fiji, Katarina Tofinga, said that UN Women will continue its support, such as with further training for counselling staff during the initial two weeks of the Centre's operations.

"Every woman and girl has the right to live her life without the threat of violence, and we're proud to support KWCSC and other agencies across the Pacific committed to ending violence against women and children," Ms Tofinga said.

The Centre has trained counsellors available for women and children phone the 191 Helpline.

The goal of the Kiribati Women and Children Support Centre (KWCSC) is to better support women and children who are affected by violence. Its $US160,000 funding is under the Australian Aid program's Pacific Women Shaping Pacific Development initiative, and with support from the Kiribati Family Health Association and the UN Women Multi-Country Office (MCO) based in Fiji.

Related News
11/06/2020
Across the Pacific, crisis centres respond to COVID-19 amid natural disasters
21/06/2019
President to launch the Strengthening Peaceful Village project to support safer homes and villages free from domestic violence
21/06/2019
Kiribati launch of the new Pacific Partnership to End Violence Against Women and Girls
27/02/2019
Ways to Reduce Violence Against Women and Girls with Disabilities in Samoa and Kiribati
07/08/2012
UN Women Convenes Consultations on Eliminating and Preventing Violence against Women and Girls in Fiji and Six Other Pacific Islands States
END_OF_DOCUMENT_TOKEN_TO_BE_REPLACED