Comedy for Equality: Harnessing the power of laughter for empowerment and peace

New York City, New York — “I believe in women having control over their own bodies, but I feel like my own body is getting a little out of control. I’m in my 30’s, and it feels like my body is a band. The older I get, different parts are pursuing solo careers,” joked Aparna Nancherla to a packed house of delegates, United Nations staff and civil society organizations at the event Comedy for Equality, held on June 28 on the sidelines of the High-level Conference on Counter-Terrorism in New York.

Aparna, an American comedian best known for her work on Comedy Central’s “Corporate” and Netflix’s “The Standups”, joined others from the industry for a discussion on the role of comedy in promoting women’s empowerment and peaceful societies. “Comedy for Equality”, held as part of UN Women’s “Empowered Women, Peaceful Communities” programme funded by the Government of Japan, also showcased two comedy videos, produced in partnership with Mythos Labs.

"Brainwash", made by East India Comedy, is a satirical take on a typical beauty product advertisement, and "HI-SIS", by Indonesian comedians Cameo Project, parodies a violent extremist recruitment video. Both videos feature female comedians from South and Southeast Asia respectively and seek to challenge the gendered narratives used by violent extremist groups in the region.

“While this work was originally piloted to counter extremist ideology in the online space, the implications go far beyond this realm,” explained Alison Davidian, Programme Specialist for UN Women’s Regional Office for Asia and the Pacific. “Comedy can and is being used to promote broader themes of women’s empowerment and gender equality, by not just making us laugh, but through challenging stereotypes with a broad and engaged audience. Much of comedy deals with the absurd and sexism at its heart is absurd. Comedy when it’s done well can be a delivery system for this truth.”

Panelist Natasha Vaynblat, a New York City-based comedian, echoed the sentiment that comedy can be a way to engage with gender social norms. Her Instagram account @natashawearsclothes pokes fun at the exclusivity and elitism of the fashion world and the pressures it places on women. “We all have style, and we all should feel confident in the choices we make and also make fun of those choices.”

Female comedians are proving to be a major driving force for social change. “The best comedy imagines new, better worlds by laughing at the old, current one,” Aparna has previously noted.

Priyank Mahtur introduces the videos “Brainwash” and “HI-SIS”, which have together garnered over 300,000 views on YouTube alone. Photo: UN Women/Ryan Brown

UN Women’s work in Bangladesh has taken this concept to the community level, with the pilot project ‘Amar Shokti’ (meaning “My Power” in Bengali), which empowers rural women to engage with their communities on addressing harmful social norms by producing and sharing short videos. The videos address issues ranging from child marriage to domestic abuse. “By helping young women recognize and embrace the fact that they are already strong, powerful individuals, the ‘Amar Shokti’ campaign made participants less vulnerable to extremists’ empty promises of empowerment.”, Priyank Mathur, CEO and Founder of Mythos Labs, explained.

From the community level to the international stage, comedy can and has been a platform to challenge gender stereotypes and extremist ideologies, and to promote simple and powerful truths – that women and men are equal, that empowered women contribute to peaceful communities, and that our societies are stronger for it. 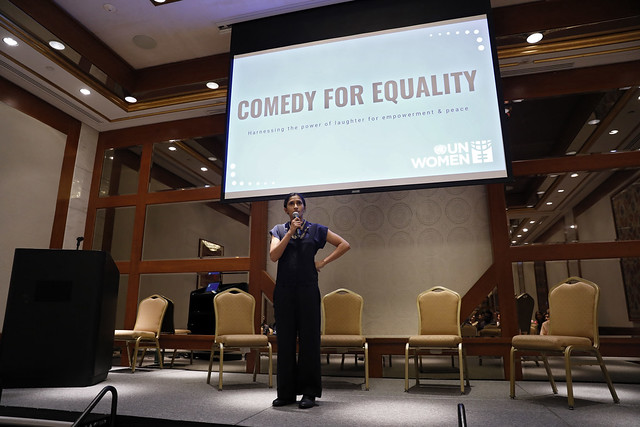