Training for Rapid Action Force Officers (RAF) on conflict related sexual and gender based violence, protection of civilians and child protection with an aim to encourage higher deployment of women in peacekeeping missions

UN Women, DPKO and RAF collaborated to conduct training for RAF officers including men and women on critical peacekeeping issues to equip the police officers with an understanding of the mission mandate, international humanitarian law and human rights, protection of civilians, sexual and gender based violence, conflict related sexual violence and sexual exploitation and abuse. Photo: Rapid Action Force (RAF)

The 2016 was a special year as not one but two trainings were conducted for RAF officers, one in January and the other in November. The five day long training recently concluded in November was the fourth in the series that UN Women has been conducting with RAF since 2014. With the conclusion of this training, a total of 38 RAF officers have been trained to share the knowledge and skills with potential RAF officers to be deployed on mission.

The Rapid Action Force (RAF), a specialized paramilitary force of the Central Reserve Police Force (CRPF), Government of India, deploys about 250 personnel, including 125 men and as many women, to United Nations peacekeeping missions annually. In 2007, RAF created history by deploying the first all-female formed police unit (FPU) with the United Nations Mission in Liberia (UNMIL). The unit returned to India in 2016, as Liberia assumes full responsibility for its national security amidst the ongoing UNMIL drawdown.

The Liberian President Ellen Johnson Sirleaf, who was closely guarded by the RAF FPU over the past nine years, underlined the contribution of the force in “inspiring Liberian women, imparting in them the spirit of professionalism and encouraging them to join operations that protect the nation”. Since the departure of the all-female FPU from Liberia in February 2016, Liberian women now make up 17 per cent of the country’s security sector, as compared to 6 percent in 2007. Following Rwanda, India is the second largest police contributing country to UN peacekeeping missions, deploying 900 police officers/ units. Overall, of the 13,000 police in peacekeeping missions, 10 percent are females. Although currently only about half of the target of deploying at least 20 percent females in the police; these numbers are relatively better off than the three percent composition of females in the military. India currently deploys about half percent of females from its military and police. However, the Hon’ble Prime Minister of India, Mr. Narendra Modi has committed to higher representation of female peacekeepers in police units to UN peacekeeping missions, at the UN Summit on Peace Operations in 2015. The trainings conducted by UN Women, DPKO and RAF, have a two-fold objective. One, to engender peacekeeping operations through looking at critical concepts of protection of civilians, child protection and sexual violence from a gender lens; and second, to encourage higher deployment of females on the ground in missions.

There were many firsts to the training held in November. For example, UN Women put together a mix of instructors who included serving officers at the DPKO and the Indian Police Service, they brought in a range of experience from their leading positions during challenging UN peacekeeping missions such as in Mozambique, Timor Leste, Darfur, Kosovo, South Sudan and Congo; the training introduced the latest DPKO module on Child Protection; 40 percent of the 38 trainees were females; and RAF personnel from among diverse ranks participated, including Assistant Sub Inspector, Sub Inspector, Inspector, Assistant Commandant, Deputy Commandant, and Commandant. Hosted at the Academy of Public Order (RAPO), Meerut, Uttar Pradesh, the training was the first one on peacekeeping launched at the Academy. This is symbolic of the strong commitment of RAF to enhance the capacities of its officers to deal effectively and sensitively to gendered issues crippling the safety of women and girls, and men and boys in conflict and post conflict settings.

As peacekeeping missions grow increasingly complex in their need to address contemporary challenges, such as incidents of violence against civilians, including sexual violence, within states and across the borders, threats of terrorism break down of state infrastructure, violations against human rights and international humanitarian law, and weapon proliferation; existing peacekeeping mechanisms seem to be failing.

A critical way of dealing with these challenges remains engendering of peacekeeping operations and deploying more females wearing the “blue beret”. For example, when female peacekeeping units patrol the community, women and girls feel safer to collect firewood and go to the markets. UN Women along with the DPKO and RAF will continue to train the police to better equip them to overcome these challenges to ensure success of peacekeeping missions. 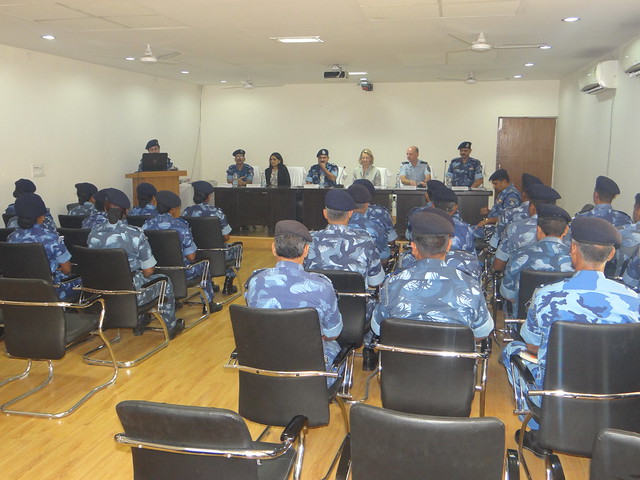