Seema Dhundia is Deputy Inspector General and commander of the first all-woman Indian paramilitary as well as the United Nation’s first all-woman police unit. UN Women spoke to her about the challenges and experiences of being a woman peacekeeper. 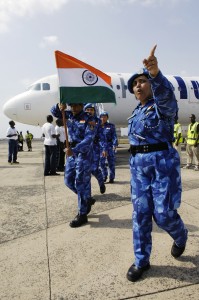 Seema Dhundia leads the force. Photo Credit: Eric Kanalstein/The United Nations
New Delhi - Deputy Inspector General Seema Dhundia was the commander of the first all-women paramilitary in India as well as the head of the United Nations first all-women police unit that was dispatched to Liberia in 2007. The positive impact created by Seema and her team have left a lasting legacy in Liberia and around the world. The highly professional work of her team speaks volumes of the importance of including women in peacekeeping.

Units such as Seema’s exemplify the resolutions passed by the United Nations Security Council, such as Resolution 1325 on ‘Women, Peace and Security.’ This resolution acknowledges the unique experiences that women face in times of conflict and, thus, the crucial input they have to offer towards building long-lasting sustainable peace.

UN Women had a chance to talk with Seema Dhundia about her experiences, insight and comments pertaining to women and peacekeeping.

UN Women: Throughout your career you have overcome many hurdles and conquered territories hitherto unchartered by women. What led you down this career path?

Seema Dhundia: I will give credit to my education, my upbringing and my home environment as a child. I also attribute my success to my training I got though my academy. Furthermore, the unconditional support from my parents had a large impact on my success. All of the above have contributed to making it a success.

UN Women: What advice do you have for other women who may be feeling the same sense of admiration and allure for the ‘blue helmet’?

Seema Dhundia: I would advise them to train hard and stay focused. Stay mentally, emotionally and physiologically balanced because these are the traits that are very needed in many post-conflict ridden societies.

UN Women: Do you think societal perception of women and the existing pervasive patriarchal mindsets make it difficult to find female recruits?

Seema Dhundia: In any given society, women are considered as the weaker sex and are often considered to be fragile and soft. Gender roles are defined in some extent right from childhood. They are conditioned to such perceptions and by the time they grow up, they automatically look for these kinds of professions. The mindsets have to be changed right from the beginning. It can only happen through education. If girls are given the proper education and the right kind of environment, I think that is what will make a difference.

UN Women: What do you feel is the greatest impact of more women as peacekeepers?

Seema Dhundia: First and foremost, there is less gender-based crime. Secondly, women can create more confidence and cooperation with the local population than their male counterparts. Moreover, victims in post-conflict societies often see themselves as role models. As most of the victims are women and children in any given scenario, the trust and the confidence of the local population can grow manifold on female peacekeepers. This increase in trust leads to the increasing of reporting of violence against women and girls. In fact, my troops became a role model for the local girls. They came forward and started asking many questions about policing. This lead to local women getting interested in their local police. As a result there was a tripling in Liberian women’s enrolment in the local police force in the following years.

UN Women: What would you say is the most challenging aspect of being a female peacekeeper?

Seema Dhundia: From my experience, to prove your worth as a peacekeeper is the most challenging thing for a woman. At first people are apprehensive. You can sense it in their eyes and in their body language. Gradually, when they see our professional competency, the whole scenario changes. I think the most challenging aspect is to prove one’s own worth and competency in any post-conflict scenario.

Seema Dhundia: I want it to flourish! There needs to be more training of women peacekeepers because it is not only peacekeeping roles that need to be filled but also peacebuilding as well, so that women’s capacities can be utilized as trainers, role models, investigators and legal support/advisors. The bottom-line is that there needs to be more female peacekeepers who are trained and sensitized around the world.

UN Women: What would you want UN Women to do to advocate for increasing women’s inclusion in peacekeeping deployment?

Seema Dhundia:  UN Women should pressurize troop contributing countries to recruit more women. In fact the problem is that troop contributing countries are not able to provide adequate numbers of female peacekeepers and police officers. Additionally, UN Women should try to make the working conditions in the mission areas as women friendly as possible. So once women are deployed in the mission area as peacekeepers, the environment is conducive for them to stay and give their best.

UN Women: How do you think the conference organized by UN Women and the Centre for United Nations Peacebuilding (CUNPK) in India has had an impact?

Seema Dhundia: It has had a very good impact. I took part and I got to learn so many things at this conference in New Delhi. I learnt about the measures that are being taken by UN Women to propagate the cause. I have studied the report of this conference as well and it shows that the conference was very effective. It has motivated female police officers who participated to take a stronger role in peacekeeping. They were thoroughly motivated and impressed by the effort being put in by the UN Women as an entity to push the cause.

Related News
11/01/2012
UN Women forms Expert Group on Women & Peace in South Asia
22/03/2011
Gita Rasaili: A woman of courage rebuilds her life in Nepal
23/03/2022
UN Women supporting female former combatants in the Philippines as agents of peace
22/12/2021
In the words of Police Lieutenant Colonel Melbeth Mondaya: “Protection and education for girls is especially important because they are the key to women’s empowerment.”
22/12/2021
In the words of Nurrunihar Mohammad: "Women's leadership … is beginning to be recognized"
END_OF_DOCUMENT_TOKEN_TO_BE_REPLACED