Remarks delivered by Åsa Regnér, Assistant Secretary-General and Deputy Executive Director of UN Women at the session on “the role of inclusive ODA by realizing human rights and gender equality” at the 12th ODA International Conference in Seoul, the Republic of Korea 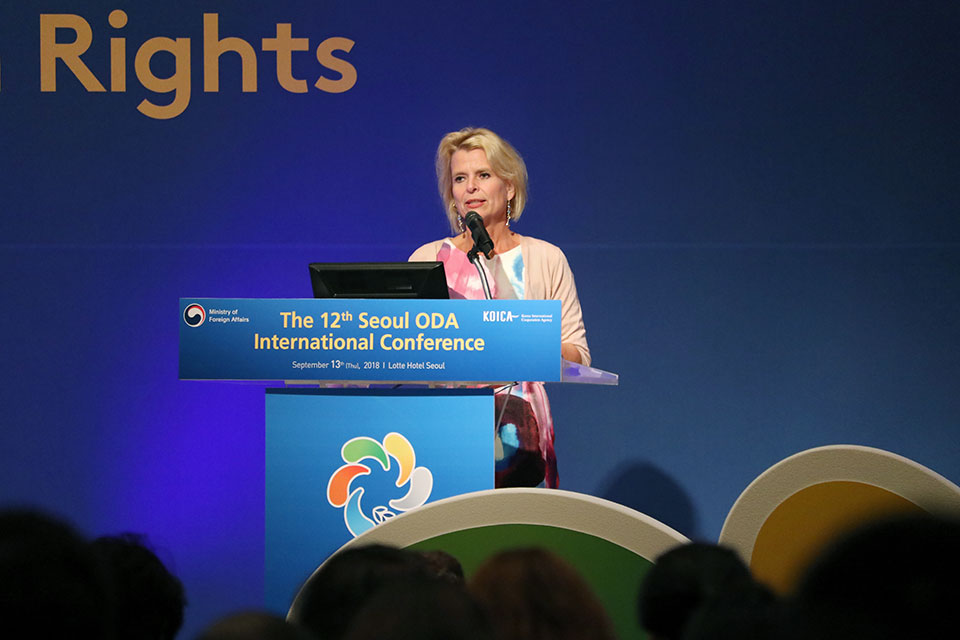 Thanks to the Ministry of Foreign Affairs (MOFA) and the Korea International Cooperation Agency (KOICA), for hosting the 12th session of the Seoul ODA International Conference.

First of all, let me say that gender equality is always a result of political will. Gender equality does not come automatically. It does not arrive with a new generation; we have to actively work towards it. In every country of the world, gender inequality is about an imbalance in power, which normally favours men over women. Achieving gender equality requires negotiations around how society should be and political priorities and positions to change.

The outcome document of the Third International Financing for Development Conference positioned gender equality into the mainstream and central tenet of the 2030 Agenda for Sustainable Development and its promise to leave no one behind.

Yet, the lack of significant investments to close the gender gap continues to challenge transitioning from promises into the reality.

Gender equality is a human right and a goal for sustainable development. Women and girls have the same rights as men and boys. That is the first and foremost purpose to work for gender equality.

Fulfilling this right is the best chance that we have in meeting the most pressing challenges of our time—including the lack of health care, violence against women, climate change, the escalating national and international conflicts and economic crisis.

Let us speak for example of our commitment to end poverty by 2030.

This aspiration will be achieved only if the discrimination that traps women in poverty is eliminated. Evidence shows that 1 in 5 girls are in households living on less than USD 1.90 a day, a sum that leaves them without enough food, housing, health care or education.

Women’s poverty arises from unequal access to economic resources. Discriminatory norms may keep them in certain occupations, working for wages less than those of men; legal statutes may restrict their ability to inherit land or seek credit. As result, women left financially dependent on men are more vulnerable to poverty, and less equipped to manage risks such as economic downturns.

Reverting this reality would not only benefit women.

The McKinsey Global Institute has calculated that USD 28 trillion could be added to the global GDP in 2025 if women participate in the labour force at the same rate as men. Thus, breaking the cycles of discrimination that hold back greater transformative change will not only make the economy, politics and society work for women, but also create a prosperous economy, a just and peaceful society and a more sustainable planet.

Yet and despite decades into the fight for gender equality, chronic underinvestment continues to hamper progress on women’s rights and sustainable development.

Costings of national gender equality action plans identify resource gaps as high as 90 per cent. ODA is a crucial, additional funding source specially for many low-income countries to make progress on their gender equality objectives. It also has the potential to play a catalytical role through well-directed and strategic investments towards strengthening national systems.

Bilateral aid targeting gender equality and women’s empowerment has been increasing, as evidenced by the 2017 Development Cooperation Report of the OECD. Yet, much higher commitment is needed.

Some DAC members have met or exceed the UN target of 0.7 per cent GNI for ODA commitments, yet at 0.32 per cent on average, DAC members are falling short.

The 2018 ADB/UN Women report on ‘Gender Equality and the Sustainable Development Goals in Asia and the Pacific’ highlights the USD 8 billion of climate funds that went towards gender equality in 2014, representing 31 per cent of bilateral ODA to climate change. However, only 3 per cent specifically targeted gender equality while the remaining 28 per cent had gender equality as a secondary objective.

In 2016 the OECD reported that financing women’s economic empowerment remains a “drop in the ocean”. Only 2 per cent of bilateral ODA to the economic and productive sectors targeted gender equality as a principal objective (USD 861 million) between 2013 and 2014.

When looking closely at sectoral allocations of aid, additional gaps emerge. In 2015-2016, only 2 per cent of aid was allocated to water and sanitation and similarly low levels were directed to social infrastructure and associated services. Around the world women do more than 2.5 times of the unpaid care and domestic work in comparison to men.

Therefore, increased investments in these areas would support the reduction and redistribution of unpaid care, opening opportunities for women to pursue education and paid employment.

The catalytic potential of ODA is at its best when aligned to national gender equality action plans.

Political will and decision is critical to ensure mainstreaming gender equality across all areas of development and explicitly targeting the multiple forms of inequality and discrimination faced by women and girls.

Promising practices include Sweden and the Netherlands which have committed more than 20 per cent of their aid to specific gender equality programmes. Other DAC members have set out high standards and goals in their policy commitments to increase levels of ODA targeting gender equality. Canada committed in 2017 feminist international policy to target at least 95 per cent of ODA on gender equality as either principal or significant.

However, much efforts are needed if ODA is to be a dynamic driver gender equality.

UN Women has consistently promoted political will and decision to ensure more and better aid to support implementation of gender equality commitments.

In close collaboration with OECD and UNDP, UN Women monitors gender equality in the context of development cooperation. A dedicated gender equality indicator focuses on measuring governments commitment to track gender equality allocations. From 2014 to 2016, the number of countries reporting on this indicator more than doubled (from 35 to 81).

First, support countries to develop equitable and progressive strategies for domestic resource mobilization and expenditure. These include broadening the tax base and addressing implicit and explicit gender biases in tax systems; also ensuring that taxes are used to advance gender equality and women’s empowerment. For example, Thailand was able to reduce its debt servicing costs, partly by reducing its reliance on external debt and devoting one third of the resources freed into funding social programmes.

Second, Member States, donors and international organizations must track their financial commitments to gender equality in both national budgets and ODA flows. UN Women has supported, for example, Asia Pacific member states, in adopting Gender-Responsive Budgeting (GRB) as an institutional practice. However, some challenges remain in the implementation. In Nepal, all sector ministries are responsible for implementation as well as monitoring and evaluation, working with the Ministries of Finance and Women. While most local units have conducted GRB assessments. these have not yet been implemented at village level. As result, GRB is driving budgetary practice mostly for line ministries (particularly Education and Health).

Third, increased investments are needed for institutional mechanisms for gender equality and women’s organizations. We must support their crucial role in advocating for legal and policy changes and monitoring and holding government to account. We must ensure that decisions on public spending and priority-setting are participatory and inclusive and that women’s organizations have the space to participate in implementation, follow-up and review of commitments.

Fourth, we must build a global enabling environment to support the achievement of gender equality commitments. This requires countries at all income levels to collaborate to combat illicit financial flows, international tax competition and debt burdens on low income countries.

In conclusion, to “leave no one behind,” and ensure progress towards the 2030 Agenda, multilateral institutions should hold gender equality commitments foremost in their policy and programmes.

In 2015 Member States recognized that by ensuring the rights of women and girls across all the goals, justice and inclusion would be possible, economies would work for all, and environmental sustainability would be our reality and the one for the future generations. Clearly demonstrating ODA’s contribution to gender equality could incentivize DAC members to reach and exceed the UN 0.7 per cent of GNI target for ODA commitments.

More than ever before we have opportunity to make this happen. Political will and commitment are pivotal. We count on your leadership.