From where I stand: “I identified challenges in both activisms, in terms of acknowledging intersectionality”

Rukshana Kapali, 20, is a young transgender woman activist from Nepal. She has been at the frontlines of Lesbian, Gay, Transgender, Intersex and Queer (LGBTIQ) activism in Nepal and a heritage conservation movement of the indigenous Newa people of Kathmandu Valley to save their culture and language, which are currently at risk. Highlighting diversity and finding synergies between her two activisms has been one of the main challenges for Rukshana, and she has tried to address these issues by founding a discussion platform for young LGBTIQ persons in Kathmandu valley. 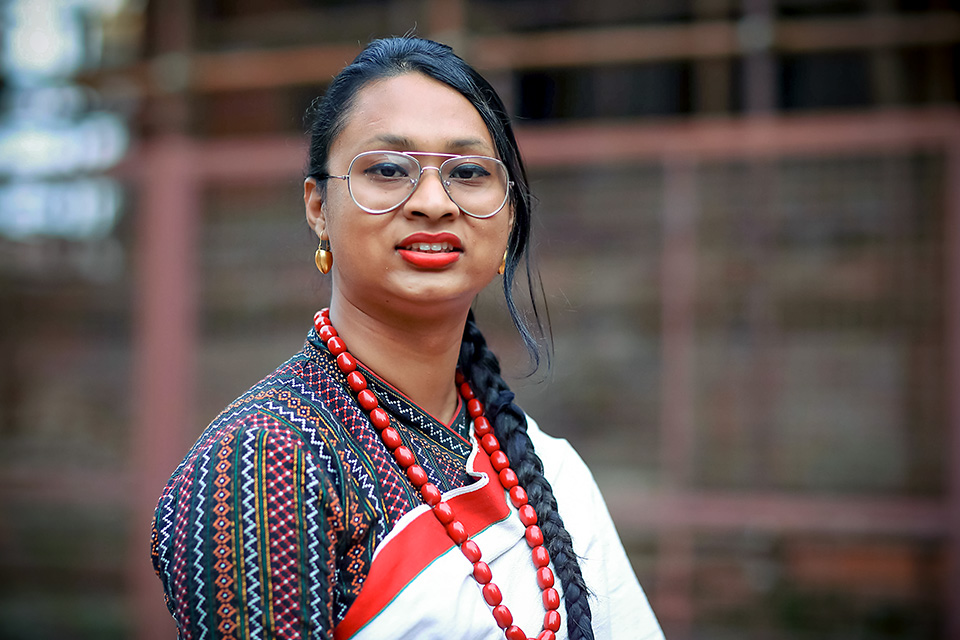 I was born in a traditional Newar household in Patan, Kathmandu Valley, and my childhood was highly influenced by my family’s cultural background. I lived in a big family with my grandparents and they did not speak Nepali. So, I grew up speaking Nepal Bhasa, my mother tongue. However, at school I would get shut out of my native language as I was only exposed to Nepali and English, the only two languages used in most educational institutions in Nepal. Being unable to speak my native language outside my home, I developed a curiosity and a desire to learn more about it. I started going to libraries and reading books written in Nepal Bhasa, and eventually started studying the language academically. From there, my journey towards exploring the issues surrounding my language and my culture started, and that is how I became a part of the Newa movement.

Meanwhile, my own personal journey as a transgender person naturally inspired me to join the LGBTIQ movement. Soon, I noticed that both the movements that I was a part of had issues of their own, and I started critically reflecting on them. The Newa movement is very patriarchal and heteronormative. I faced a lot of transphobia from fellow Newa activists. Everyone wanted to talk about issues of ethnicity, but no one wanted to acknowledge the widespread misogyny, or the discrimination faced by LGBTIQ individuals, within the Newa community. I also observed similar issues within the LGBTIQ movement. Mainstream LGBTIQ activists didn’t want to speak out on the issues of discriminations based on caste, ethnicity and language within the movement, fearing that it would dilute the cause (LGBTIQ rights) we had been working for. I found that very problematic.

I identified challenges in both activisms, in terms of acknowledging intersectionality. This led me to start an advocacy group called Queer Youth Group, with fellow young activists from Kathmandu Valley. Our three basic principles are: we take gender and sexuality as a spectrum, we are intersectional and we acknowledge diversity. I think that has helped me a lot in terms of finding synergy between my two activisms. Why don’t we talk about caste within the queer movement? Why don’t we talk about ethnicity? These questions and discussions keep happening in our youth group. We are doing a kind of piecemeal activism that can have a snowball effect. We are starting by doing things in small ways such as activism through art and creative activities, so as to avoid activism fatigue and burning out.”

Rukshana Kapali has earned praise and respect for her activism and has spoken at several national and international platforms on issues of LGBTIQ and heritage conservation. She recently participated at the Thought Workshop, an ongoing discussion series organized by UN Women with Nepal’s thought leaders and activists. She was also Master of Ceremony at the 2019 International Women’s Day photo exhibition organized by the United Nations in Nepal, where her photo story was featured. Kapali has been working towards Sustainable Development Goal (SDG) 11 on sustainable cities and communities, which includes a target on strengthening efforts to protect and safeguard the world’s cultural and natural heritage. Her work also relates to SDG 5 on gender equality, and SDG 10 on reduced inequalities.

Related News
27/01/2021
UN Women supports efforts to improve LGBTIQ rights in Nepal
24/08/2020
From where I stand: “I believe that violence against women is never okay. I do all I can to make sure it doesn’t happen.”
09/06/2022
UN Women Pakistan and Nishat Mills Limited join forces to promote gender equality and safer workplaces
01/06/2022
One Step at a Time
03/12/2021
From where I stand: “Do not wait for others to hand you your rights”
END_OF_DOCUMENT_TOKEN_TO_BE_REPLACED