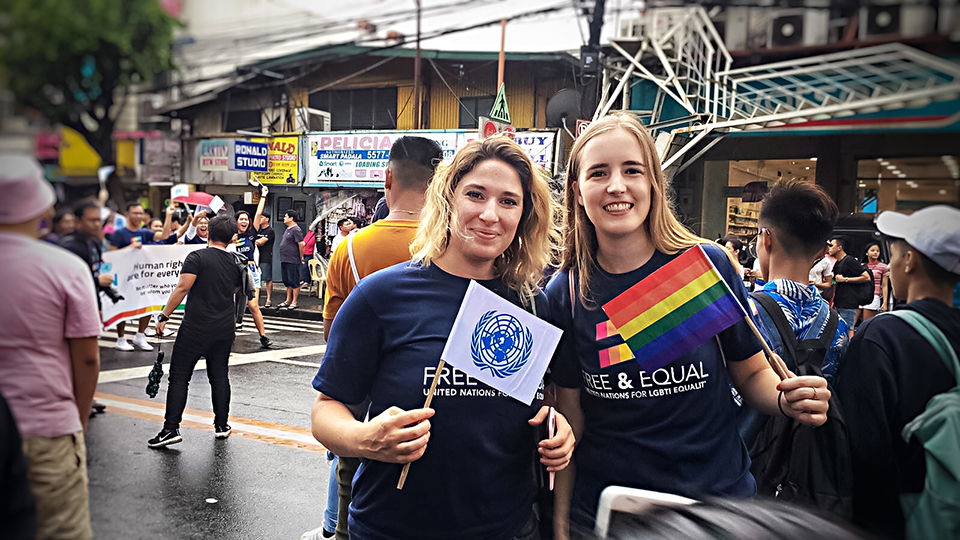 (from left) Rebecca Singleton of UN Women and Kate O'Shannessy of International Organization for Migration show their support at the Metro Manila Pride march on 29 June. Photo: Alecs Ongcal

Manila, Philippines — The sun may not have been shining on the Metro Manila Pride March in Marikina City, but the horizon was nonetheless illuminated with bright rainbow flags and costumes celebrating the lesbian, gay, bisexual, transgender, queer and intersex (LGBTQI) community. 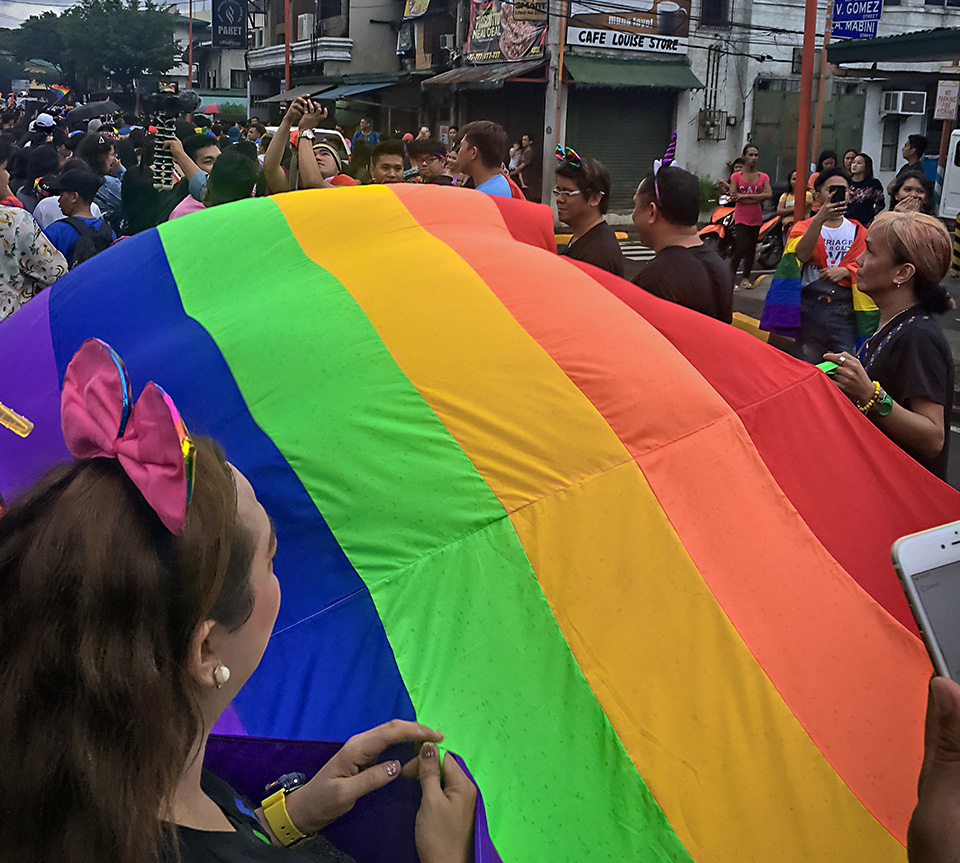 A group of marchers walk with a giant rainbow flag at the 29 June Pride march in Manila. Photo: UN Women/Rebecca Singleton

Roughly 56,000 people took to the streets in the 29 June march to celebrate diversity of sexual expression and gender identity, and to rally for the rights of the LGBTQI community. This year’s theme was Resist Together, a call for advocates and supporters to fight discrimination against LGBTQI people.

Ola Almgren, the United Nations Resident Coordinator for the Philippines, said: “People of conscience everywhere must keep pushing until we realize the promise of the Universal Declaration of Human Rights for all people. The freedom, dignity and equal rights that all people are born with should and must be a living reality for the LGBTQI community each and every day of their lives.”

LGBTQI Filipinos have been celebrating Pride since 1996, and the Metro Manila march has been the largest Pride March in South-East Asia for the past two years. It is not only a celebration, but also an effort to raise awareness and push for change, either by getting support for legislation or by educating people on how to be activists, advocates and allies. 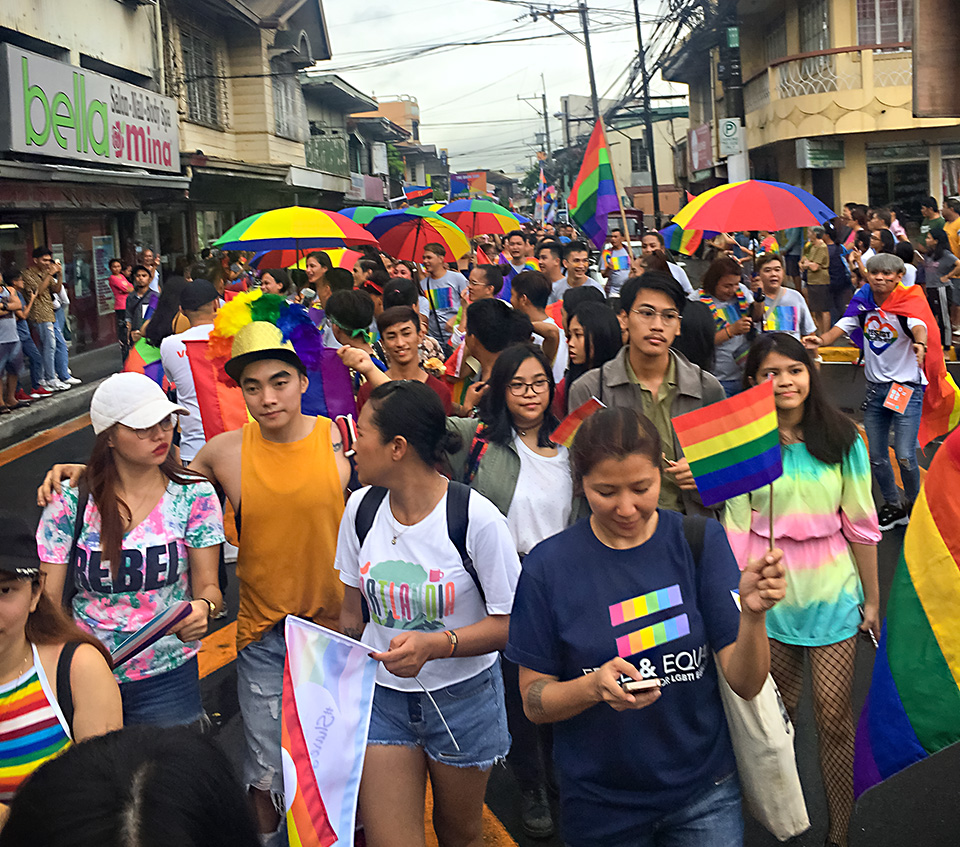 An Anti-Discrimination Bill has been introduced and reintroduced in the Philippines Congress since 2000 but has continually failed to pass through the Senate. The bill would protect the LGBTQI people from discrimination on the basis of their sexual orientation and sexual identity and expression.

Without a nationwide bill, LGBTQI people have had to turn to local governments to enact ordinances to protect them from discrimination. Rates of poverty, homelessness and food insecurity are higher among the LGBTQI community, so people who do not live in municipalities with an ordinance are particularly vulnerable to human rights violations. While the local ordinances do mark progress, passage of the national Anti-Discrimination Bill is critical to achieving comprehensive equality.

UN Women Philippines programmes including Safe and Fair help female migrant workers, including LGBTQI people, who have experienced violence. This programme promotes coordination of quality services that are survivor-centered, inclusive and responsive to the needs of marginalized workers. 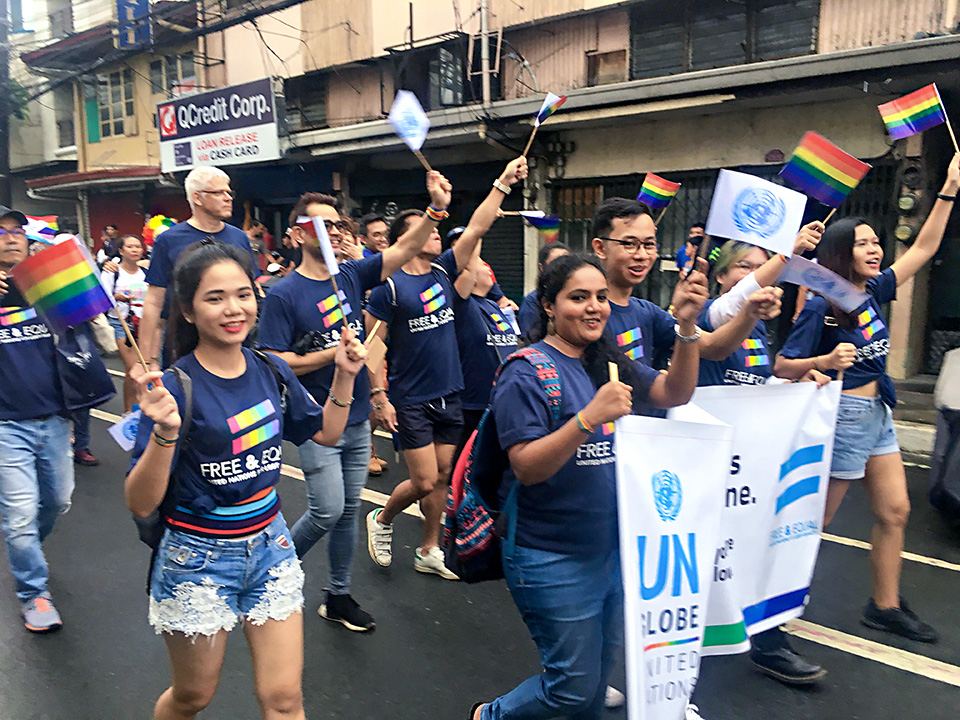 Said the National Project Officer of Safe and Fair, Charisse Jordan: “LGBTQI persons face different layers of risk to violence based on their sexual orientation and gender identity and expression. This also takes place in the context of migration, where in some countries that migrant workers travel to, homosexuality and behaviors akin to homosexuality are criminalized.”

The rainbow colors that decorated the streets and contrasted with the grey sky on 29 June served as a reminder that rallying for the rights of the LGBTQI community is an important part of the overall resistance against discrimination and exclusion, a resistance that UN Women will continue to support.