Political Will: A Significant Driver of Gender Budgeting

As we celebrate 15 years of Gender Responsive Budgeting in India, there is a need to scrutinize the criticality of the role of key stakeholders to ensure that budgets are viewed with a gender lens and gender equality is addressed. This post examines the various stakeholders that help promote Gender Responsive Budgeting, focusing on one important instrument – Political Will. 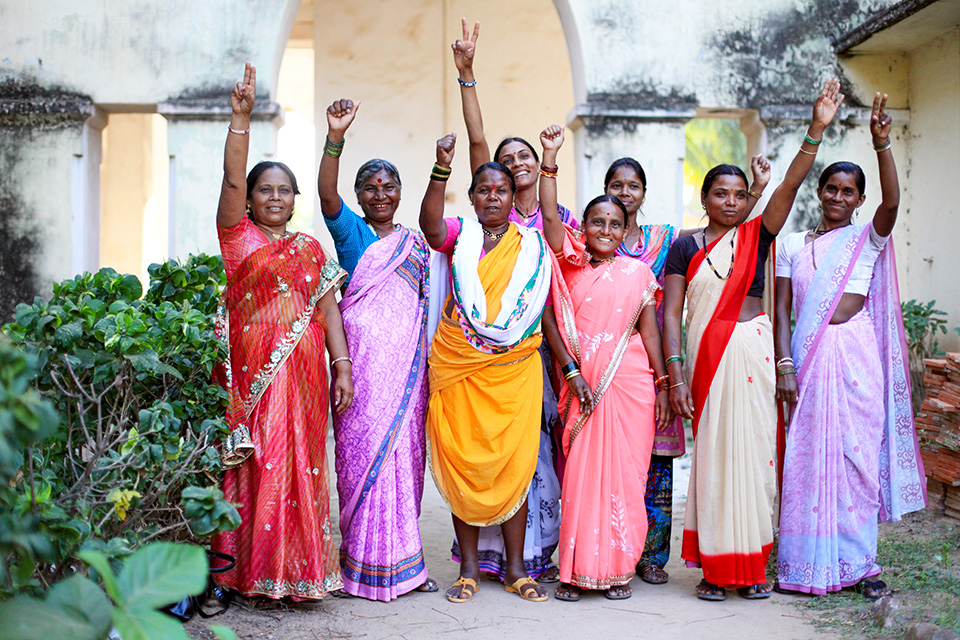 Political will is the motive/will of the political leader of a nation that generates political action. The first person that comes to mind when one talks about political will is Prime Minister Shri Narendra Modi. Everyone’s eyes are on what this political leader will accomplish in their term as head of the state. With regard to Gender Equality, various stakeholders of the Government have emphasised on “women-led development” as the big policy shift. One of the key ways to push this policy, is to make women enablers of the desired change. In my recent experience and interaction with this Government on Gender Budgeting, there are two particular instances of significance that I would like to enumerate upon.

The Budget Speech 2019-20 presented by India’s first full time woman Finance Minister Shrimati Nirmala Sitharaman, while highlighting the importance of “examining the budgetary allocation through a gender lens”, announced setting up of a broad based committee on Gender Budgeting with Government and private stakeholders to evaluate and suggest actions for moving forward. This committee is envisioned to examine the impact of existing provisions that have a bearing on women’s status, and provide action points for Gender Analysis. The proposed committee was the key recommendation made by the Cabinet Minister for Women and Child Development Shrimati Smriti Zubin Irani, to the Prime Minister, by way of a position paper titled “Redefining Gender Budgeting in India”, which was aimed at drawing the attention of the Prime Minister and Finance Minister towards the need to undertake the budgeting exercise with a gender lens, in order to tackle gender sensitive issues.

In this first instance, Shrimati Smriti Irani, within weeks of taking charge as the Cabinet Minister for Women and Child Development, identified key issues pertaining to Gender Responsive Budgeting in the Budget 2019-20. She proactively engaged with various stakeholders in order to give recommendations for immediate actionables to the Prime Minister’s office. The PMO, appreciating the urgency of the action required called upon the finance ministry to incorporate the recommendations made. The quick grasp of the issue at hand and the swift actions called for exemplified proactive leadership in transforming ideas into reality. The committee established for undertaking gender analysis of the budget and recommending the way forward is a clear indicator of the commitment of this government in course correcting established practices and innovation in order to promote institutional reforms in line with the development agenda envisaged by it, which in the present case is development enabled by women.

Given the centrality of budgets in public policy, the second illustration is the tool of Gender Budgeting itself. As an enabler for facilitating gender responsive actions around the country, India adopted Gender Responsive Budgeting or Gender Budgeting as a powerful tool in 2004 to mitigate gender gaps by endeavouring to make plans, policies and budgets more gender responsive. The Ministry of Women and Child Development (MWCD) adopted a mission statement of “Budgeting for Gender Equity” and disseminated a Strategic Framework of Activities to implement this mission. Subsequently over the years some steps were taken to strengthen the process, but most steps failed to mainstream the exercise. 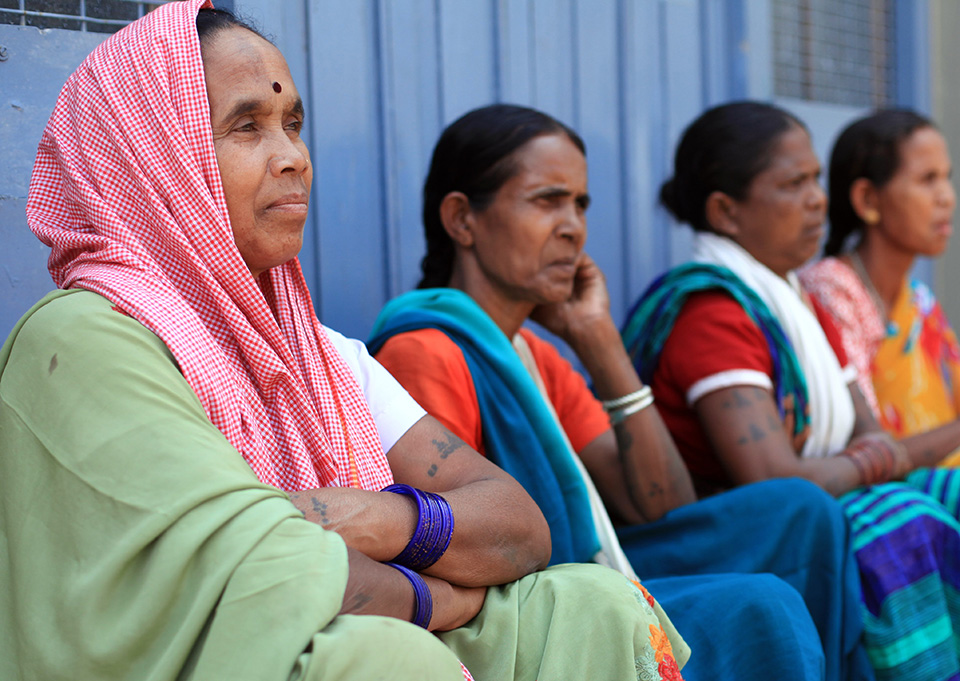 Despite the comprehensive efforts, India has witnessed challenges to achieving gender equality. Although Gender Equality is enshrined in the Constitution, yet India ranks 125th out of 159 on the Gender Inequality Index (UNDP). The gender gap is quite high with India standing at 108th of 149 countries (WEF Report, 2018). In terms of Female Labour Force Participation (FLFP), India has a mere 27 per cent FLFP, compared to the Global Average of 37 per cent. All these indicators point to the increasing economic and social vulnerabilities faced by women in the country.

This brings me to 2019, which recorded 78 women MPs in the Parliament. Amongst them, Smt. Smriti Irani was given the portfolio and took over as the Hon’ble Minister for Women and Child Development. Within a week of commencing her role, I received a request to deliberate upon the action plan to advance Gender Budgeting. As part of my briefing, I was asked to prepare a position paper in collaboration with the Minister’s Office on the issue.

The Minister, on her part, used every available forum to push the agenda of Gender Budgeting, In the Question Hour of Rajya Sabha on 27th June 2019, while responding to a question related to gender equality, the Minister of WCD acknowledged the role of Gender Budgeting in the progression of a women-friendly nation, throwing light on the increase in allocations for women. Presenting Gender Budgeting at a National platform of such significance, helped raise awareness on the tool among other Members of Parliament, which is the first and foremost entry point to facilitate dialogue on Gender Budgeting. Additionally, the Minister’s Office also reached out to UN Agencies and other significant institutions working in the field of gender equality and women’s empowerment to get their point of view on the issue.

Following this, in the Budget Speech presented on 5th July 2019, the first ever full time woman Finance Minister Smt. Nirmala Sitharaman while highlighting Gender Budgeting stated that, “Gender analysis of the budget aimed at examining the budgetary allocation through a gender lens has been in place for over a decade. I propose to form a broad-based Committee with Government and private stakeholders to evaluate and suggest action for moving forward.“ 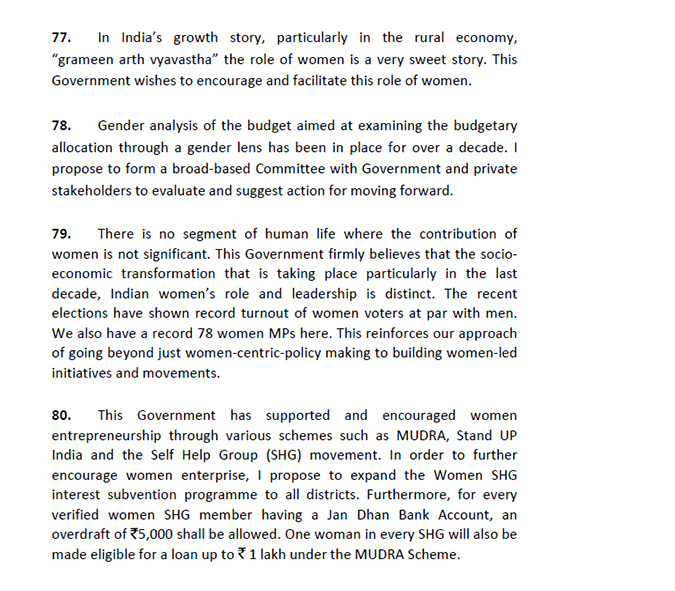 Excerpt from the Budget Speech of 2019-20. Source: India Budget

From the recent surge in the awareness around Gender Budgeting, my engagement at MWCD and UN Women, the efforts of Government machinery, exhaustive research by multilateral organisations and CSOs, I have been able to identify some of the key stakeholders/entry points for pushing forward Gender Budgeting as have been given below:

Achievement of gender equality and women’s empowerment calls for transformational change in policy, planning, budgets, laws, and a conducive political environment. Swift action under the aegis of WCD Minister has provided Gender Budgeting with the much needed direction for gender mainstreaming. This thereby reinforces the framework that ensuring women in key political decision making powers is a definite prerequisite to ensuring gender equality. Coupled with a strong political will, this setting provides greater scope to translate gender commitments into fiscal commitments, at all tiers of governance. The reinvigoration of Gender Budgeting from the highest level of leadership has laid a strong foundation for gender responsive initiatives and the future of Gender Equality in India. I look forward to an exciting time ahead for a redefined approach to Gender Budgeting and Gender Equality in the country.