Christian Ewert is President of amfori, a global business association for open and sustainable trade. amfori groups over 2,400 retailers, importers, brands and associations of more than 40 countries, with a combined turnover of more than 1 trillion euros. amfori recently signed the Women’s Empowerment Principles (WEPs), which UN Women and United Nations Global Compact developed to guide private companies to create gender-equal workplaces. The association also will soon sign an agreement to expand its collaboration with UN Women. 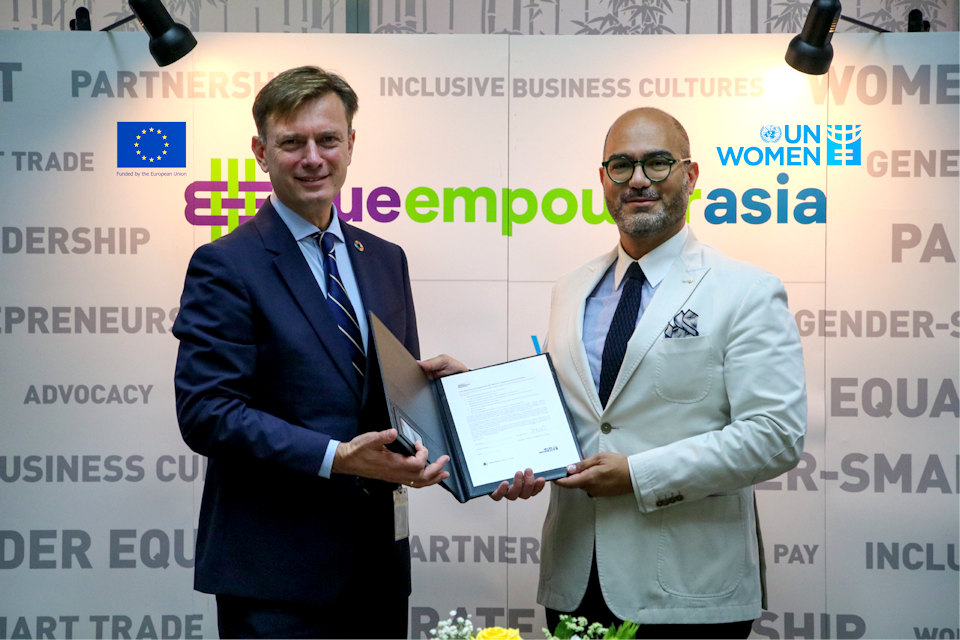 Why is it important to promote women’s economic empowerment?

amfori’s mission is to enable each of its members to enhance human prosperity, use natural resources responsibly and drive open trade globally. Given that women are disproportionately represented among the most vulnerable in society and in supply chains, our mission cannot be realized without women’s economic empowerment.

Women’s empowerment within our organization will translate into improved performance and well-being of staff. Research also shows that women having leadership roles in organizations and companies has been linked with a stronger ability to tackle future global challenges such as those addressed by amfori. We also know of McKinsey research which shows that companies in the top quartile of gender diversity are more likely to have above-average financial returns. Furthermore, it is argued that advancing women’s equality could add $12 trillion to global growth.

What does it mean to you to sign the Women’s Empowerment Principles?

We have already taken steps towards promoting gender equality. These include launching a women’s empowerment program for women in the supply chains of three of the largest sourcing countries of our members and signing the UNECE Declaration on Gender Responsive Standards and Standards Development. Signing the Women’s Empowerment Principles will provide us with an additional tool by extending our goal of promoting women’s empowerment from the C-Suite to the factory floor.

How can men play a role in changing discriminatory norms in the business world?

Men speaking out for gender equality can serve as a role model for other men and thus help create momentum for this important matter. Considering that many decision-making positions are currently occupied by men in order to make change happen, we need to win over male advocates as allies.

What steps is amfori taking to advance women’s economic empowerment across its offices?

amfori signed the UNECE Declaration for Gender Responsive Standards in May 2019. It calls on all signatories to develop a Gender Action Plan that sets out how our organization, members and wider industry could be made more gender-responsive.

The Action Plan involves organizing training for amfori leadership and key staff on gender diversity, ensuring all amfori internal corporate documents utilize gender neutral terms, and reviewing gender parity in leadership roles within the organization as well as gender pay gaps. In November last year we started with these trainings, involving the leadership and a range of staff in Brussels as well as some representatives in our sourcing countries. We are looking at further opportunities for training of staff this year.

What are the challenges to building gender-inclusive supply chains in Europe and Asia, and how can we address them?

Discrimination often reflects the wider cultural environment as well as the laws and norms in the countries in question. The absence of regulatory frameworks may also allow certain practices to go on. Addressing gender discrimination will require changes in deep-rooted practices in education, religion and culture. Luckily, there are other actors who work on addressing these areas. amfori’s advocacy at a global and international level complements this by addressing regulatory frameworks.

While gender discrimination may be more visible in supply chains in Asia than in Europe, Europe is far from free of gender discrimination. A 2019 study showed that among the largest publicly listed companies in the EU, only 17.6 per cent of executives and 6.9 per cent of CEOs were women. The message from European companies and associations that advocate for women’s empowerment in Asia would be much stronger if we practiced what we preached more. This a critical challenge that the WEPs and the joint EU-UN Women programme 'WeEmpowerAsia' could help us address.

Men are not just part of the #GenderEquality equation, but part of the solution. @amfori_intl’s @christianewert2 joins @nacirimohammad in support of the #HeForShe movement, calling for business action to empower women.#WeEmpowerAsia@EU_Commission @UN_Women@unwomenEU @HeForShe pic.twitter.com/oeSmSAGRuf

#GenderEquality is everyone's business. Many thanks to @amfori_intl’s @christianewert2 for fruitful discussions on joint collaboration over @unwomenasia projects, reiterating the ‘most important’ step to boost economies – ‘empowering women’@EU_Commission @UN_Women#WeEmpowerAsia pic.twitter.com/Pwh5ckAmFm

On #IWD , we celebrate women. Every other day, we are working to make them more equal.

Together, amfori - Trade with Purpose and @UN_Women are proud to be collaborating in the signing of the UN Women Empowerment Principles (WEPs).