From where I stand: "Having more women in conflict mediation is positive for everyone Involved.”

Martinho Carvalho Sarmento, recently promoted to the position of Inspector General, knows the benefits of having women involved in conflict mediation and prevention. Previously Chief of the Department for Community Conflict Prevention (DNPCC), Inspector Sarmento has been working with UN Women to promote gender equality in the workplace and the community. He is planning to use his new expanded role and his knowledge of gender equality issues to increase women’s participation and leadership in many departments of the Ministry of Interior. 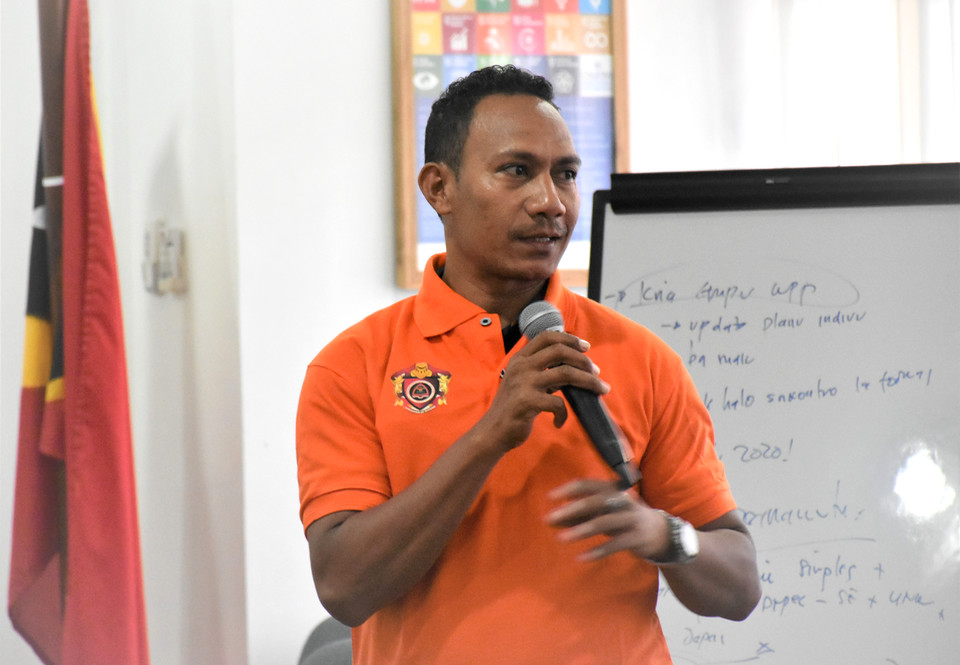 Throughout our time working with UN Women, my staff and I completed training on leadership in gender equality and human rights. I was interested in these trainings because I wanted to know more about how to promote gender equality in my workplace. Before this, I never really knew much about how to make work more equal, as it was not the norm around us. I used to think that there were male and female jobs, but now I realise that this is a stereotype, and anyone can do whatever job they want to do, as long as they work hard and are dedicated.

I was also inspired by the trainings to try and encourage more female staff to take on leadership roles. I used to get women to lead civic education training in my department, and trust women to make decisions as conflict mediators.

From this change, I noticed some jealousy coming from other departments in the ministry – a lot of men asking why are women getting this attention now?  Also, many Xefe Sucos (leaders of the village) have underestimated a lot of women in their roles as conflict mediators.

I tried to assure them that having more women involved in the workplace is positive for everyone involved. Women sometimes have other attributes that we as men aren’t well practiced in, such as being good listeners, especially when working with other women in the community. I also tell them my story as a leader in my department – being overwhelmed with my work – and how sharing opportunity is a healthy and responsible thing to do. Now in my new role, I want to find ways to increase women’s participation and leadership in the ministry as a whole. If the Directorate can make progress in this area, I am sure others will soon follow.”

Inspector Sarmento lives in Dili, the capital city of Timor-Leste, and in recent years, has been part of the government’s process of implementing the National Action Plan 1325 on Women, Peace and Security, with the technical support of UN Women, and funding from the Government of Japan. Martino’s story links to the Sustainable Development Goal 5, which promotes gender equality and aims to end all forms of violence against women and girls and Sustainable Development Goal 16 on peaceful and inclusive societies.