From where I stand: “I believe that violence against women is never okay. I do all I can to make sure it doesn’t happen.”

Shila Ale is a well-recognized woman human rights defender from Barahathawa Municipality, Province 2, Nepal. As member of Respect Nepal, a grassroots women’s organization (GWO), she has been working relentlessly to strengthen access to justice for women and excluded groups. 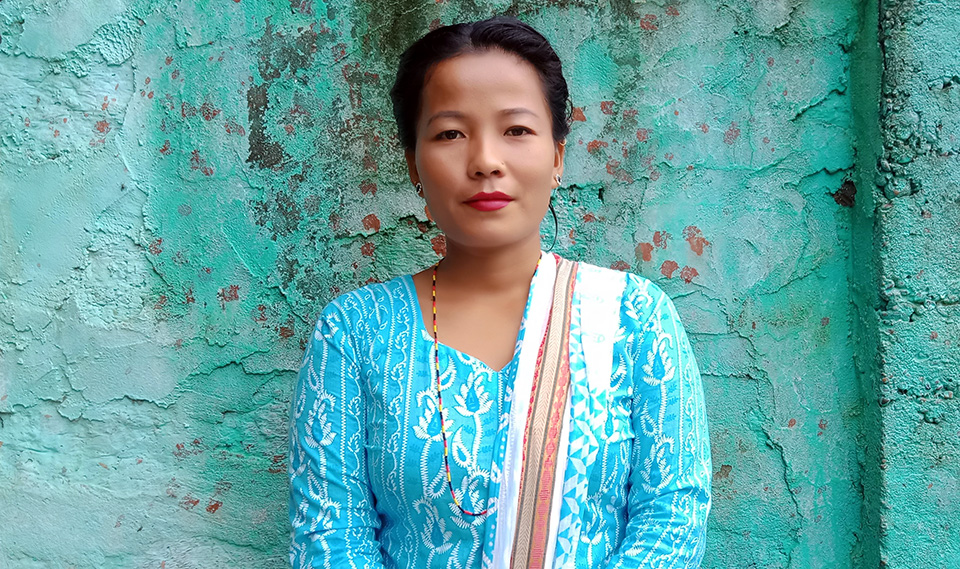 Shila Ale has been working on the frontlines to facilitate access to justice and services for survivors of gender-based violence during COVID-19 lockdown. Photo: Courtesy of Shila Ale

When the lockdown began, I was informed by community members in our Municipality about Uma*, a single mother with two children who was constantly tormented by her mother-in-law and her husband’s brother. Ever since her husband’s death a few months ago, Uma had been subjected to both physical and psychological violence. When I heard about Uma’s situation, I reached out to her.

The COVID-19 pandemic has had far reaching impacts on the society as a whole. These are strange times indeed. Women who are already deprived of access to rights and resources are impacted the most. Cases of domestic violence and other forms of violence have also been on the rise in my community.

I began my career as a primary school teacher in a government school. In my spare time, I volunteered to provide basic literacy to a group of 20 women who had expressed interest to me. As the women gradually learned to read and write their names, I felt motivated to support more women.

When a fellow teacher in my school established Respect Nepal in 2019, a grassroots women’s organization (GWO) in Barahathwa Municipality, I got the opportunity to join as a member. The GWO was formed with the goal of improving the situation of women and children in our community. After hearing about my commitment to the GWO, the founder of Respect Nepal also told me to prepare to lead the organization in the future.

In early 2020, the Deputy Mayor/head of the Judicial Committee (JC) of our Municipality, informed us about a training opportunity for members of Respect Nepal. This was timely for me, as I was keen on strengthening my knowledge and skills to advocate against discrimination faced by women. The training implemented under UN Women’s Access to Justice programme was conducted with the objective of enhancing the capacity of GWO members to strengthen rights-based advocacy for women’s access to justice. During the training we participated in mock-session and simulation based on various real-life scenarios - violence against women perpetrated by men, VAW perpetrated by women, and by community members. These practical tools also helped us to map the key justice actors, service providers and pathways of justice in the process. The training was effective in fostering critical thinking and peer learning among us. The knowledge I gained has enabled me to help survivors of domestic violence during the nationwide lockdown.

When I heard about the violence inflicted on Uma by her deceased husband’s family, I immediately went to her house to inquire more about her situation. Her family members were present in the house, but they treated me cordially as they know about my work. I talked to Uma in a private space so that we were not overheard. I told Uma about the work of GWO and how we have been supporting women like her. Initially she was too stressed to share what she was going through. But she gradually relaxed when I told her that she could choose to have me check on her in the future. After she shared her experience, I told her about the help and services providers that are available in our community. She told me that she was feeling scared but her biggest concern was that the violence perpetrated to her may extend to her children. Given the severity of her situation, I was in constant communication with her either through the phone or by making home visits. I also explained to her why it is important to speak out against violence and seek support if and when she wants. We also discussed that if her in-laws tried to be violent Uma could remind them that, she would have no choice but to seek justice from the police or reach out to a non-governmental organization (NGO) to get them arrested. Much to my relief her situation improved after some time. The family members refrained from violent behavior and mistreatment towards her after hearing about the legal repercussions of their action from Uma. Over time the family members changed their ways and also made an effort to amend their relationship with her. As I am still concerned about her, I continue to make regular calls to her or visit her to ensure that she is fine.

After the Deputy Mayor who is also the head of the Judicial Committee found out that Uma’s case had been resolved, she approached me to support more women who were in a similar situation. Subsequently, I was able to reach out to 18 women in a little less than a month to check on them and offer support. I have communicated the challenges faced by these women to the Deputy Mayor for necessary action.

I have been actively involved in the COVID-19 response in our Municipality. I have been raising awareness among women about COVID-19 preventive measures such as physical distancing, hand-washing and use of masks. I also met the Deputy Mayor to inform her about some women who had lost their livelihoods and were facing food insecurity in the pandemic. As government funds were scarce, the Deputy Mayor contributed her personal savings to support the affected households to provide relief . Similarly, when the relief of basic food items did not reach our village on time, I immediately brought it to the attention of the Deputy Mayor. This resulted in timely distribution of relief to those who were in dire need of it.

In the COVID-19 context, mobility restriction and decreasing funding support to GWOs pose challenges to our advocacy and we need to find ways to address such obstacles so that we can continue our work.

Shila Ale is human right defender working as a member of Respect Nepal, one of the GWOs supported by Legal Aid and Consultancy Centre (LACC) and its three consortium NGO partners under the joint programme of UN Women, ICJ and OHCHR “Enhancing Access to Justice for Women in Asia and the Pacific: Bridging the gap between formal and informal systems through women’s empowerment”. The programme is generously supported by the Swedish International Development Cooperation Agency (SIDA).

* name has been changed to protect their identity

Related News
19/06/2019
From where I stand: “I identified challenges in both activisms, in terms of acknowledging intersectionality”
03/12/2021
From where I stand: “Do not wait for others to hand you your rights”
08/07/2021
Overview: In South Asia, COVID-19 deepens gender disparities
15/03/2021
I am Generation Equality: Net Supatravanij, Thai social entrepreneur and activist against gender-based violence
20/11/2020
What happened after COVID-19 hit: Nepal
END_OF_DOCUMENT_TOKEN_TO_BE_REPLACED