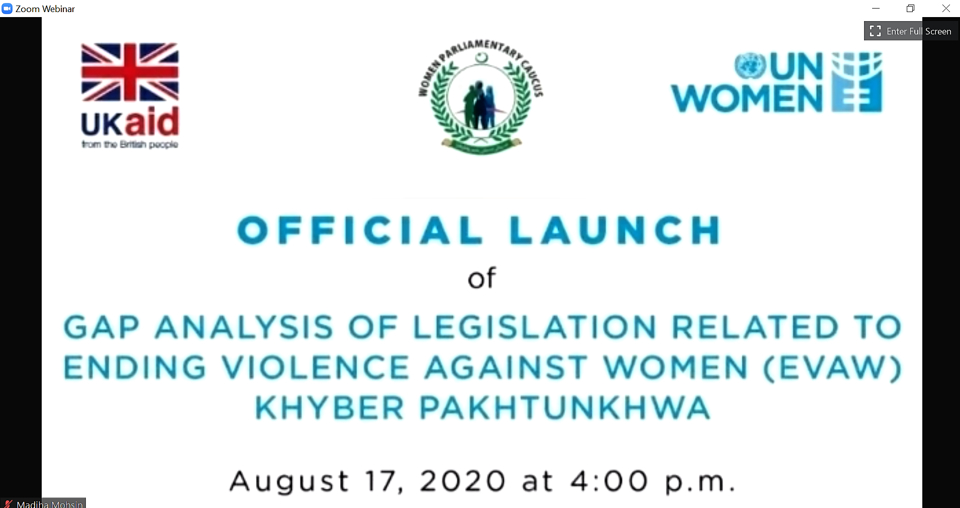 PESHAWAR: Women Parliamentary Caucus Khyber Pakhtunkhwa (WPC-KP) and UN Women Pakistan today launched a report on “Gap Analysis of Legislation related to Ending Violence Against Women (EVAW)” to provide an in-depth analysis of the normative, implementation and monitoring gaps in the legislative framework of the province and to identify and document gaps in the existing provincial legal framework and implementation process.

The gap analysis report has been designed and commissioned by UN Women Pakistan in partnership with Women Parliamentary Caucus KP with the financial support of UK Aid. The virtual launch was attended by the provincial parliamentarians, members of WPC, government officials, representatives of civil society organizations, media, academia, legal community and people from all walks of life.

The starting point for this analysis has been contextualizing EVAW laws within the framework of the Convention on the Elimination of all Forms of Discrimination Against Women (CEDAW) and Pakistan’s other international commitments. The document substantiates and builds on previous bodies of work and adopts a holistic approach in identifying gaps and proposing recommendations for EVAW related legislation in Khyber Pakhtunkhwa.

In her welcome address, General Secretary WPC-KP Ayesha Bano said, “The commitment of the KP government to the cause of women’s rights is evident by the initiatives undertaken to implement Pakistan’s international commitments at the provincial level. In order to eliminate gender-based discrimination and safeguard the interests of women and girls, WPC-KP, in partnership with UN Women Pakistan, is working for enactment and implementation of women-related legislation – aligned with Pakistan’s national and international commitments – in the province.”

“The Gap Analysis Report of Laws relating to EVAW will create a better understanding of the legislative framework which will in turn support the enactment and implementation of effective and inclusive legislation in Khyber Pakhtunkhwa,” she remarked.

In his message, Provincial Minister for Law Sultan Mohammad Khan recounted the achievements of the Government of Khyber Pakhtunkhwa related to pro-women legislative reforms over the years. He specifically highlighted government’s success in the amendment and implementation of the Khyber Pakhtunkhwa Protection of Women against Harassment at Workplace Act 2010, and the appointment of renowned social activist Rukhshanda Naz as the Provincial Ombudsperson for Protection Against Harassment of Women at Workplace. “We are currently trying to build consensus for the enactment of Domestic Violence Bill and Child Marriage Restraint Bill, which will be two landmark laws in the history of the province,” the Minister underlined.

Chairperson Khyber Pakhtunkhwa Commission on the Status of Women (KPCSW) Dr. Riffat Sardar appreciated the concerted efforts of Khyber Pakhtunkhwa’s women machinery and the commitment of WPC and UN Women to end discrimination and violence against women in the province. She said that KPCSW was committed to connect all stakeholders including government, civil society, women parliamentarians, entrepreneurs, civil society and communities in efforts to improve the status of women in Khyber Pakhtunkhwa.

Saman Ahsan, Portfolio Manager EVAW, Governance & Human Rights UN Women Pakistan, said, “UN Women is proud to be working with WPC on CEDAW-compliant legislation as part of our broader partnership to promote the gender equality agenda at the provincial level. The government of KP has put in place several laws to protect and promote women’s rights, and this report will help in taking forward the legislative reform agenda of the province. I would like to commend WPC and our partners for supporting amendments in child marriage legislation as top priority. We look forward to continuing this important work with the WPC to eliminate the harmful practice of child marriage in the province.”

Related News
05/12/2014
Indigenous women leaders in Southeast Asia unite against development-based violence
20/12/2021
Joint Statement: UNHCR and UN Women join efforts to protect and uphold the rights of women and girls in Afghanistan
30/11/2021
I am Generation Equality: Tabbasum Adnan, Founder of First All-Women Council of Tribal Leaders in Pakistan
24/11/2021
Take five: “The justice system must be responsive to persons with disabilities.”
30/09/2021
Equipment donation boosts services for survivors of human trafficking and gender-based violence during Viet Nam’s fourth wave of COVID-19
END_OF_DOCUMENT_TOKEN_TO_BE_REPLACED