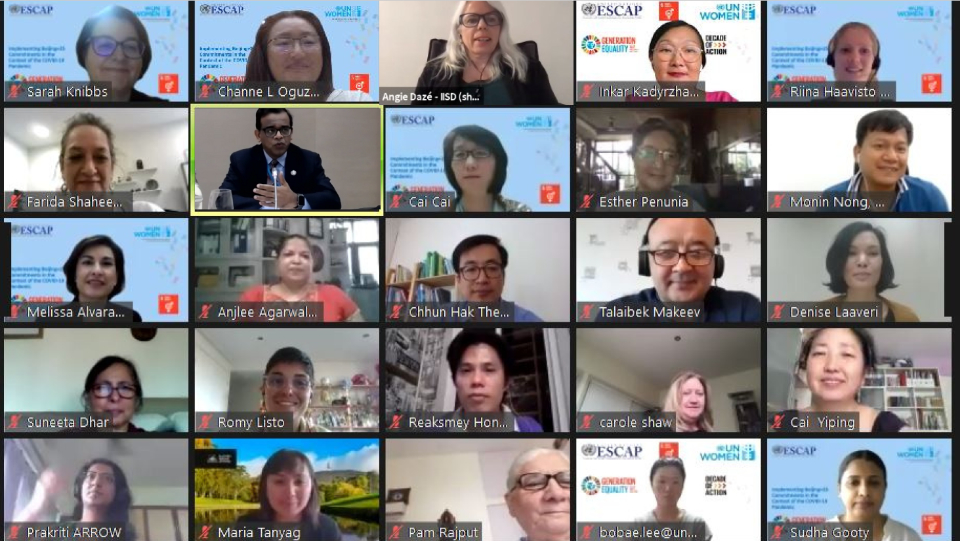 Screenshot of some participants taken from Zoom application. Click to view all participants.

Bangkok, Thailand – National strategies to recover from the devastation of COVID-19 must include steps to end the gender inequalities that have made women particularly vulnerable to the crisis, experts from around the Asia-Pacific region say.

This was clear following deliberations during an Asia-Pacific region Beijing+25 Expert Group Meeting, which was organized by UN Women and the United Nations Economic and Social Commission for Asia and the Pacific (ESCAP). The meeting gathered more than 70 gender equality advocates and experts from 22 countries, with representatives from governments, civil society groups, academia, the private sector and United Nations agencies. The meeting was convened online between 15 and 16 September, to discuss key priorities for the implementation of the Asia-Pacific Declaration on Advancing Gender Equality and Women’s Empowerment, particularly in light of the COVID-19 pandemic’s impact on women and girls. This Declaration was adopted on 29 November 2019 during the Asia-Pacific Ministerial Conference on the Beijing+25 Review.

The Declaration noted that despite remarkable achievements, progress on gender equality and women’s rights was being slowed by intensifying climate change, digital divides, urbanization, inequalities within and between countries, and violence and extremism targeting women and girls. These challenges have been exacerbated by the COVID-19 pandemic. The pandemic’s disproportionate impacts on women “are partly attributable to the existing social and economic inequalities that women have long faced”, said Srinivas Tata, Director of the Social Development Division of ESCAP. “The incidence of violence against women is clear and reported to be increasing during the pandemic across a range of countries,” Tata said. “This is especially true for domestic violence. Women are also at a greater risk of losing their income and livelihoods.”

Sarah Knibbs, Deputy Regional Director of UN Women Regional Office for Asia and the Pacific, said progress on gender equality already had been faltering, and the pandemic now is “exacerbating existing inequalities and threatening to reverse gains”.

Knibbs called for urgent action to fix gaps in policies and legislation “that allow inequalities in both opportunities and outcomes”. This, she said, includes reviewing policies and laws to see how they can transform attitudes and social norms underpinning inequality, discrimination, and patriarchy. It also means giving priority to financing “gender transformative economic stimulus packages and social protection measures in response to COVID-19”, she said. Echoing that call, Ms. Gita Sen, Distinguished Professor at the Public Health Foundation of India added that “women's machineries need to be strengthened, much more than they have been”. Additionally, she referred to the need for emphasis on the catalytic role of civil society organizations, of feminist women's organizations that function as society's conscience keepers for gender equality and Women's Human Rights.