From Where I Stand: “You can very well be a mother and a front-line combatant”

Squadron Leader Nayma Haque is one of Bangladesh’s first two female military helicopter pilots. Currently stationed at the Flight Safety Institute of the Bangladesh Air Force, she also served as one of the two first female pilots in the UN peacekeeping mission in DR Congo. 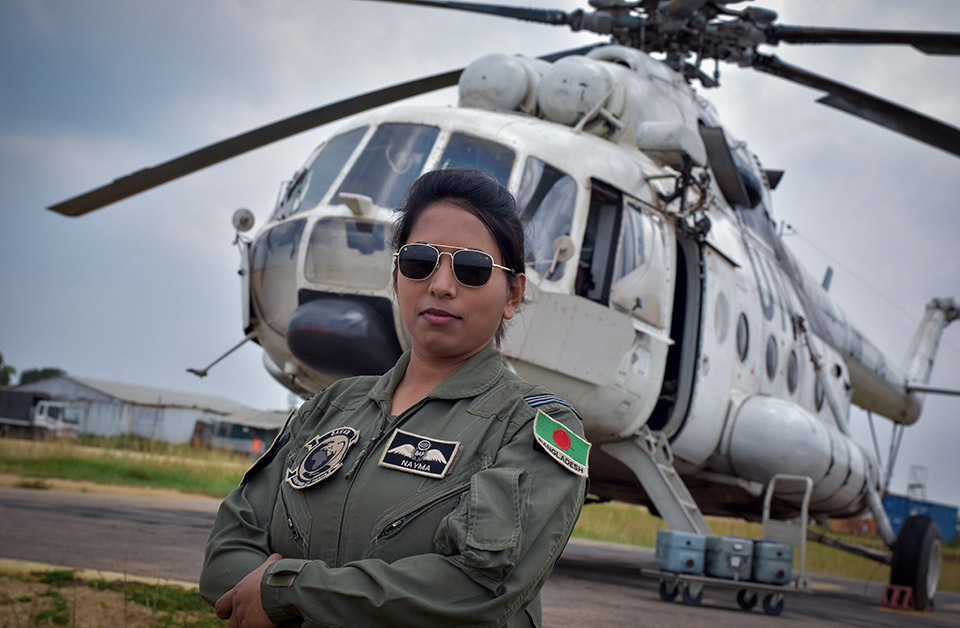 It was my childhood dream to join the air force. My grandfather served in it during the Second World War. But when I joined the Bangladesh Air Force (BAF) in 2010, as a woman I could not be enrolled as a pilot. The military started accepting women in 2000, but only in the air force, and not as pilots. It was not until 2014 women could train to become military pilots. I took that chance and after rigorous training, I became one of the first two female military helicopter pilots in Bangladesh in 2014.

Being a military helicopter pilot, particularly in conflict zones, is extremely challenging, regardless of whether you are a man or a woman. You need to have the drive and motivation to push through and overcome challenging situations in every mission. You must also have a supportive family like I had. My parents didn’t try to stop me when I told them about becoming a pilot, instead they encouraged my choice of career.

To me, women are the voices of peace and security. If you suppress them, you are strangling the entire process of ensuring peace and security. As a military pilot, I have flown during emergency-, conflict- and disaster-relief missions, which are very male-dominated fields. When I land with my helicopter, I challenge people’s stereotypical ideas of women. We give hope to girls to dream big, aim high and strive for their rights – because now, the sky is the limit for female pilots to spread their wings.

My power is my identity – I am a woman serving my country in uniform. I use this power to perform all tasks side-by-side with my male colleagues. We are always working towards the same goals, regardless of mission, which helps to promote gender equality. Women do not want charity; we want opportunities. Only then will equality be achieved. We need to give proper value to women’s contributions.

My vision for a peaceful society is simple - include, inspire and trust women in every sector of the society. Set targets for and encourage women’s leadership. You can do this by starting from home. Fight for your daughters’ education and promote gender equality while raising your children. If we want a stronger society, we need to have women and men working together, because only then are we able to achieve a society that is peaceful to its core.

To young girls of Bangladesh, I say, raise your voices and fight for your rightful place in society. You are important to ensure the safety and security of both family members and the community. You can very well be a mother at home and a front-line combatant.”

Squadron Leader Nayma Haque is one of the first two female helicopter pilots of the Bangladesh Air Force. Currently stationed with the force’s Flight Safety Institute in Dhaka, she served in UN Peacekeeping mission in Democratic Republic of Congo (MONUSCO) in 2017. She has conducted search and rescue, medical evacuations, casualty evacuations, ration missions, election missions, troops insertion and extraction and many more, all under emergency or conflict conditions. Squadron Leader Nayma’s story relates to Sustainable Development Goal (SDG) 16, which aims to promote peaceful and inclusive societies, and SDG 5 on gender equality and women’s empowerment.

Related News
24/05/2021
From Where I Stand: “Three words to keep in mind – integrity, empathy and humility. I serve with honesty the people who need me the most”
07/02/2021
Women’s meaningful participation essential to peace: Bangladesh commemorates 20 years of UN Security Council Resolution 1325 on Women Peace and Security
30/10/2020
From where I stand: “As an outspoken women’s rights activist, I have gained the confidence necessary to help Rohingya women from similar backgrounds as mine”
06/06/2019
From where I stand: “Women are a part of society, and they can accomplish anything”
06/06/2019
From where I stand: “Showing respect for the diversity of religion and caste in our community is the secret to being in harmony”
END_OF_DOCUMENT_TOKEN_TO_BE_REPLACED