From Where I Stand: “Three words to keep in mind – integrity, empathy and humility. I serve with honesty the people who need me the most” 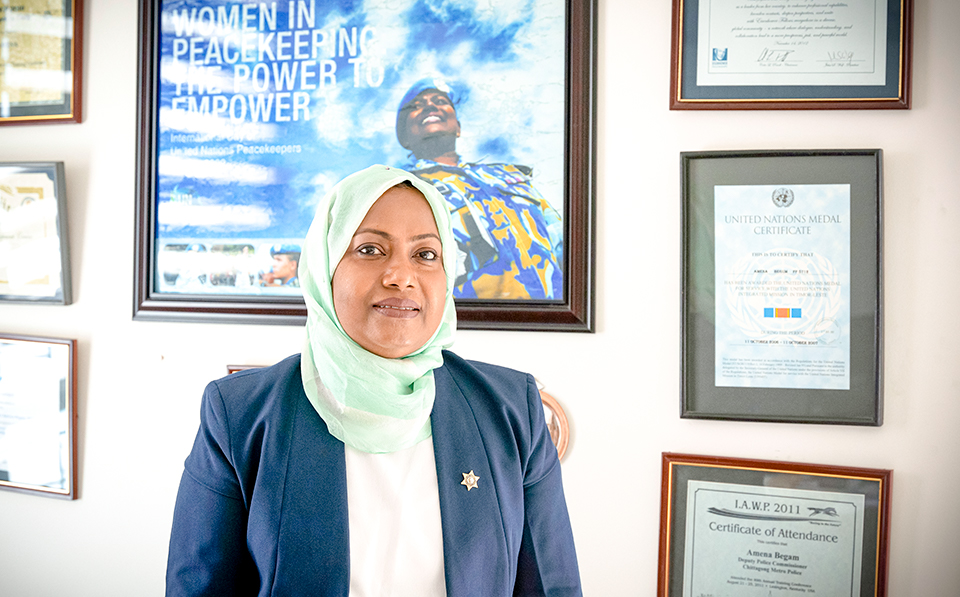 Since I was young, I have always wanted to do something that is challenging. My ambition was to join the Bangladesh Civil Service – and I chose Bangladesh Police as I felt that the job of policing would challenge me the most. I started my career with the Bangladesh Police after a rigorous recruitment process in 1999. At that time, there had only been five other senior female police officers before me.

I later got the chance to serve as a UN Peacekeeper in 2005, when I was selected to be part of the Bangladesh Formed Police Unit (BAN FPU) in the UN Mission in East Timor (UNMIT). I was the only female police officer among the 140 officers in the FPU and I served as its deputy commander. I joined to learn more about the international standards of policing, and to serve those who are the most vulnerable in conflict and crisis situations.

My work as a UN Peacekeeper included maintaining law and order, and taking actions to ensure peace, including rescue operations. We also helped to conduct the National Elections of East Timor in 2007, which was very significant to me as I witnessed the birth of a new nation.

As a police officer, I have never made a distinction of being a woman. I went through the same recruitment and training as my male counterparts, and I believe that anyone can take on any challenge based on their talent, willingness and drive to succeed.

Throughout my career, I have served in many districts of Bangladesh. I have found not only that are there more women in police now, but also that the level of confidence among female officers is higher when they have women in senior command positions. I serve as the President of Bangladesh Police Women Network, which is dedicated to increasing the prospects of women in the police through networking and leadership. I see that female officers are now more inspired and feel that they have a platform to share and address their particular concerns and challenges.

I strongly encourage and advise women and girls to choose law enforcement as a profession, because that gives us a chance to truly serve people in need. I believe it is very fulfilling to provide service to our people, especially when they face danger or any need that only we can support them with.

There are three words to keep in mind: integrity, empathy and humility. I serve with honesty the people who need me the most; I empathize with those who are suffering to help them; and I must have humility to remember the opportunities I have received to serve the people.”

Amena Begam, BPM, is a Deputy Inspector General (DIG) of the Bangladesh Police, and the President of Bangladesh Police Women Network. She served in the UN Peacekeeping Mission in East Timor as deputy commander of the Bangladesh Formed Police Unit. Over her distinguished career, she has served as superintendent of police in various districts of Bangladesh and is currently serving as the DIG of the Special Branch. She is one of the most senior female police officers in the country. Amena Begam’s story relates to Sustainable Development Goal (SDG) 16, which aims to promote peaceful and inclusive societies, and SDG 5 on gender equality and women’s empowerment.