In the words of Vasa ‘I Vao and Kotoni Feleti: “My daughter’s goals, which mirrors mine, is for her to play internationally” 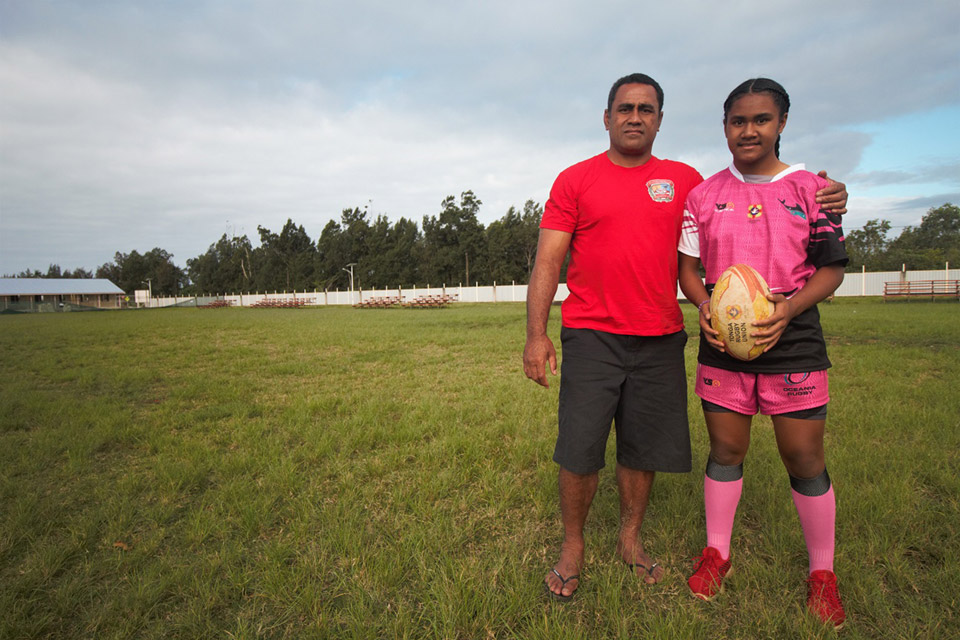 Father-daughter duo Kotoni and Vasa ‘I Vao Feleti, have been playing sports together since Vasa was in Class 1, in Tonga. It was very early on that former international rugby player Kotoni, saw “incredible potential” in his young daughter and decided to nurture it. Photo: Talitha Project/Alokoulu Ulukivaiola

My name is Vasa Feleti, and I am 13 years old. I really like playing rugby 7s. The first time I played rugby, I wasn’t aware of the rules, but my dad helped me learn them.You see, he is as passionate about the sport as I am because he played for the national Tonga team, and internationally. He saw the potential in me for the sport, and he helps me train. My dad is my inspiration.

I also like to play soccer and other athletic sports, like running 100 and 400 meters and long jump.

Even though I have my dad’s support, playing sports is not without its challenges. As I am only 13 and often play with kids older than me, sometimes I can’t get proper playing gear. But I don’t let that deter me. In fact, I have even won awards in rugby! To me this confirms my talent and potential for the sport.

Aside from my dad, I have other good trainers and coaches, like those from the Talitha Project. They encourage me by building my capacity. This, together with my dad’s experience and commitment to training me, has made sure that I have not been injured on the field so far despite my young age and playing with older kids.

I believe that girls can do anything that boys can; that, opportunities should be equally shared amongst girls and boys.

If a girl wants to give up playing because of the challenges she is facing, I’d encourage her to stick with it. This is a phrase we use on the field during game. Sometimes during a game players will make mistakes, like dropping the ball, and when that happens, they will either stop or slow down their game, and it’s the job of the other team members to encourage them by yelling stick with it - meaningdon’t give up, keep going.

My name is Kotoni Feleti, and I am Vasa’s dad. I am from the village of Nakolo in Tonga. After leaving school, I joined the Nakolo rugby league team in 1996, and in 1997 I was selected to the Tonga national rugby league team. I was the only player selected to join the national team. I was later selected to the Tasman team, and this was the first time for me to play internationally. We tested in New Zealand, and I signed with Queensland. From there I went to Britain, before moving into the physio profession.

My daughter Vasa has incredible potential in rugby. I have always encouraged her to play rugby, and I have been training her in the game since she was in Class 1. She is in secondary school now and we still train. I tried to encourage her to play soccer, but she was never interested in that and that’s why she plays rugby.

We’ve had our share of challenges along the way, though. As our village is in rural Tonga, Vasa doesn’t have access to the same opportunities as kids in the town area, which is why I had been training her myself. I had been taking her to villages where they do have rugby teams, like Lavengatonga and Fu’amotu, where she trained with boys or men’s rugby teams. Now Vasa plays for well-known teams, like the Kolomotu’a team. Even though she so young at 13, she’s played not only at the village level but also at the district level.

Potential aside, she just really enjoys the game. She would often ask me to hold or run with the ball so she can tackle me, and when she tackles, I can really feel the impact of it. No boy can do it better.She shows more interest in rugby than her brother, so I would take her to the rugby field, and she would be the only girl on the field, and some boys would come off the field crying because of her tackles!

I wish for Vasa to continue playing rugby. She’s played in the 7s, 15s and now she’s playing league. I’m grateful for the opportunity provided through Talitha Project’s Front Row Against Violence project, encouraging an equal playing field for girls to play rugby.

My daughter’s goal, which mirrors mine, is for her to eventually get an opportunity to play internationally. She often says to me, “Dad, despite my being a girl, I am persevering in rugby with the hopes of getting the opportunity to support our family in the future”. Vasa playing from our village also positively influences other girls to play rugby as well.

Developing the skills of coaches and trainers to train women players would open opportunities and attract more players. If it wasn’t for the Talitha Project - providing equipment and other forms of support - I don’t know how and where we would get the support for girls’ rugby. Just recently, the girls’ rugby camp they supported was able to bring together different teams to socially interact - not only the players but also the officials and executives. The more we interact, the less friction and tension is likely to arise, allowing closer collaboration for pushing girls and women’s rugby forward.

Vasa is very fortunate. Not only because she has me to support and train her but also because the great people at the Talitha Project are complementing this effort. I wish this level of support for all girls wishing to take up a sport in Tonga.