Indonesia holds Peace Festival to reaffirm its commitment to Women, Peace and Security

Representatives of Indonesian ministries, UN Women Indonesia and local organization AMAN gesture to indicate their determination to “build back better by protecting and empowering women and girls in social conflict” in line with the theme of the event, in front of a sign reading “Peace Festival”. Photo: UN Women

Jakarta, Indonesia — The Government of Indonesia has reaffirmed its commitment to protecting and empowering women and children in social conflict through a Peace Festival (Kenduri Perdamaian).

The festival was held earlier this month in the capital Jakarta and online, co-organized by the Ministry of Women’s Empowerment and Child Protection and the Coordinating Ministry for Human Development and Cultural Affairs, in collaboration with UN Women Indonesia and the Asian Muslim Action Network (AMAN) Indonesia.

The event brought together officials from the central and provincial governments, civil society organizations (CSOs), women activists, UN agencies, and development partners to call for concerted action to accelerate the implementation and coordination of the country’s second five-year National Action Plan (NAP) for the Protection and Empowerment of Women and Children in Social Conflict (2020-2025). The NAP implements Indonesia’s commitments under the global Women, Peace and Security (WPS) framework. 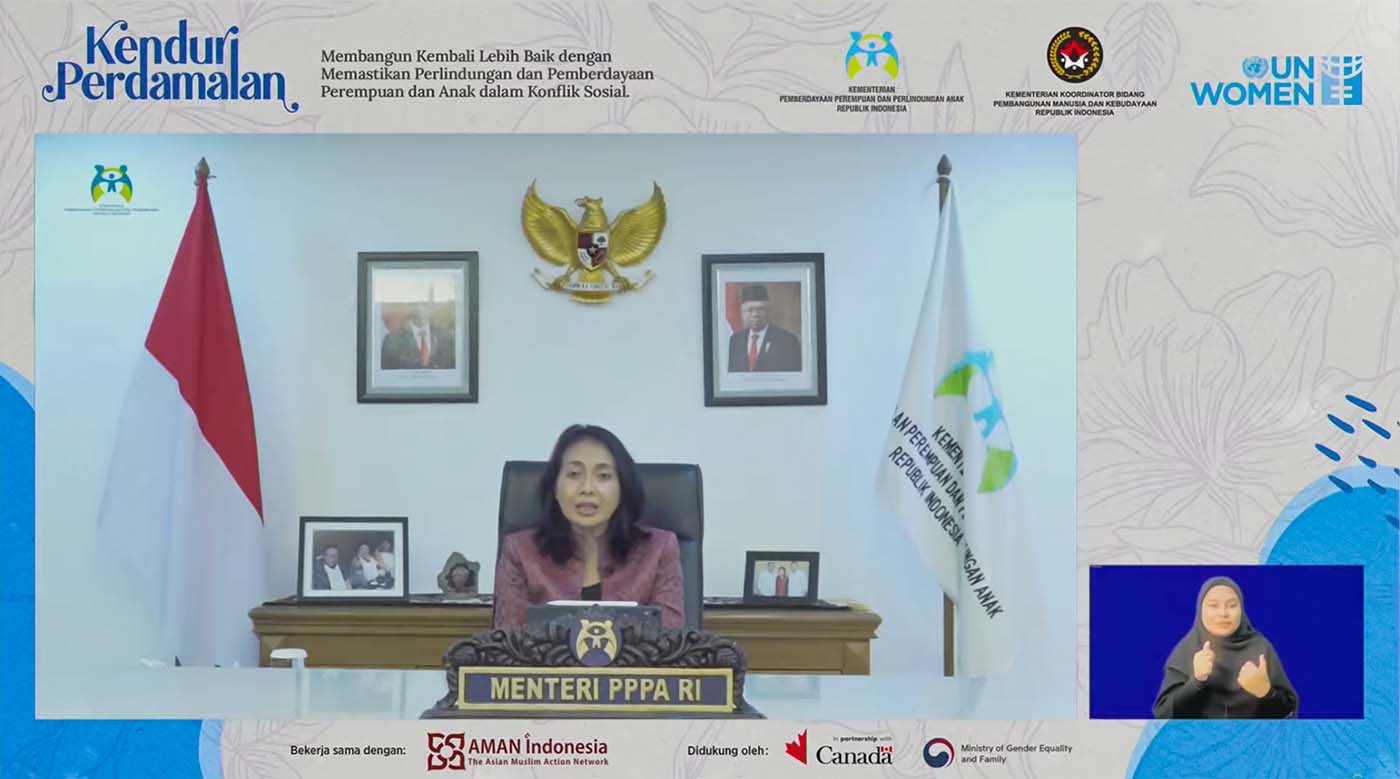 Bintang Puspayoga, minister of women’s empowerment and child protection, emphasized that women and children are among the most vulnerable to conflict situations. “It is our shared hope that this NAP will become an instrument to strengthen further coordination and collaboration between ministries, agencies, local governments, and civil society organizations to protect and empower women and children in social conflict,” said the minister.

“The NAP is an expression of the political will of the government and people of Indonesia to prevent gender-based violence in various regions that have a potential for social conflict,” said Femmy Eka Kartika Putri, deputy for coordination for quality improvement of children, women and youth at the Coordinating Ministry for Human Development and Culture.

She also urged those regions affected by social conflict to involve and engage women in peace processes, from conflict negotiations to resolution and management. “We hope that Indonesia will change the long-held stigma that women are victims of conflict situations and present them rather as agents of international peace and security,” she said.

Indonesia launched the first NAP for the Protection and Empowerment of Women and Children in Social Conflict in 2014. The second generation will continue to serve as a blueprint for the government to implement the United Nation’s Security Council Resolution (UNSCR) 1325 on WPS (2000). The NAP remains the basic reference point for strengthening three pillars of prevention, mitigation, and empowerment and participation.

The WPS agenda is vital to addressing the pressing and growing non-traditional security challenges in Indonesia, including the ongoing COVID-19 pandemic. The second generation of NAP on WPS highlights the importance of preventing violent extremism, and other specific security issues that women and girls face in the current context, such as land disputes and conflicts over natural resources, disinformation and hate speech.

“These are the points that made this NAP both relevant and contextual and also very strategic, especially with Indonesia’s Presidency in the Group of 20, which takes the theme Recover Together, Recover Stronger,” said Dwi Faiz, head of programmes for UN Women Indonesia. “The second NAP on WPS emphasized the need for a special strategy to face various phenomena such as violent extremism, online radicalization, climate change and the COVID-19 pandemic, which have disproportionately impacted women and girls.”

The Peace Festival invited participants and guests to participate in an interactive talk show to raise public awareness of the NAP in the provincial and local context and to provide recommendations for implementation. Rasyidah, a women peace activist from Aceh, shared her experience and emphasized women’s potential in peace processes and post-conflict recovery. Award-winning stand-up comic Sakdiyah Ma’ruf conveyed a similar message in her performance that women have the power and capacity to lead the way to rebuild better in their communities.

In Indonesia, civil society has played an essential role in the development and implementation of NAPs. It will continue to provide insights and actively collaborate with the ministries in monitoring and evaluating the implementation.

Ruby Kholifah, AMAN Indonesia country representative, said the NAP “is not only concrete evidence of Indonesia’s commitment to the implementation of UNSCR 1325 (2000), it also showcases the country’s commitment to democracy by providing an open space for civil society engagement. AMAN will ensure the voice of civil society is heard in Indonesia. Only within a democratic space can the implementation of Women, Peace and Security agenda be carried out in a transparent and accountable way”.

Together with civil society, UN Women will continue to provide technical and coordination support to the Ministry of Women’s Empowerment and Child Protection as secretary of the NAP on WPS.

The Peace Festival was financially supported by the Global Affairs of Canada and the Government of the Republic of Korea.

Related News
16/08/2022
UN Women co-hosts hybrid Forum on developing Viet Nam’s plan on women and peacebuilding
28/07/2022
National Counter Terrorism Agency and UN Women organize dialogue on gender-responsive policymaking to counter extremism in Indonesia
15/07/2022
UN Women works with the Government and civil society on training to protect women and children from conflicts in Aceh, Indonesia
10/05/2022
In an Indonesian province, the people devise a gender-responsive action plan for peace
22/04/2022
Take Five: “Women are more suitable actors in the prevention of terrorism and violent extremism”
END_OF_DOCUMENT_TOKEN_TO_BE_REPLACED