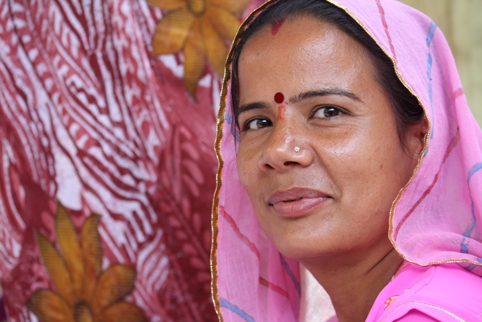 New Delhi - At a meeting of around 40 elected women representatives in Rajasthan, there is a dynamic leader who stands out amongst the large assembly of women.

Sunita Rajawat, a Ward Panch (member of the village council) from Vanasthali Gram Panchayat (village council) in Tonk district, is not afraid to participate freely. “Initially my identity was that of a woman confined to the realm of my household, but I have now stepped out of that threshold and have found a new platform where I can speak out my mind, express my views and do something worthwhile,” says Sunita, Ward Panch, Tonk district, Rajasthan.

These words speak volumes about Sunita’s leadership skills that have emerged with her newfound role. At panchayat meetings where women members were initially discouraged by men to sit on the front row or to address issues openly, Sunita has carved a place for herself and other representatives. She has motivated many women in her village to participate in local politics and express their views without inhibitions.

Many women like Sunita are now coming together as part of a UN Women programme to promote women’s political leadership and governance in partnership with the Government of India.

India now has more than a million women who have been elected to office at the grassroots level. But challenges persist that restrict women from running for office and exercising their rights as elected leaders. They now need support to be more effective and influence decision-making in panchayat meetings.

By working with over half a million elected women representatives in five states of India, the programme focuses on the potential of gram sabhas (public village meetings) to promote gender equality. With funding from the Royal Government of Norway, UN Women and its partners will ensure that women elected representatives have equal influence over political decision- making in the focus districts.

UN Women, UNDP and UNICEF are developing training modules with the Government to ensure that women leaders are better trained across 13 states in India.

Another strategy of the programme is to work actively before panchayat elections. Campaigns in Bihar and Odisha in 2011 helped women candidates file nominations and manage electoral campaigns. This led to a rise in women’s share in panchayat leadership from 42 percent to 50 percent. 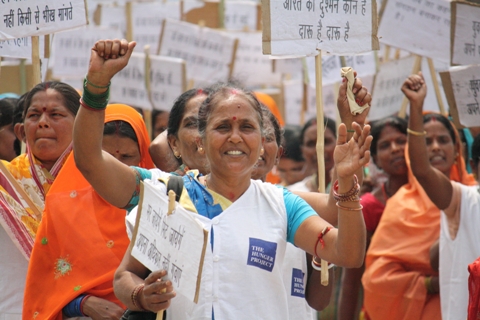 One energetic campaigner is 45-year- old Indrani Chaurasia, a social worker, who dreams of making her village an ‘ideal one’. As an elected Ward Member of Samaspur Gram Panchayat from Muzaffarpur in Bihar, Indrani’s active association with women Self Help Groups and Mahila Pratinidhi Sangathan (organisation of women’s representatives) has increased her capacity and skills to take action, especially during these elections.

Mahila Jagruk Manches bring together elected women representatives and women citizens to discuss their problems and find solutions. These Manches or awareness platforms have lifted the spirits of the women and brought strength in numbers. Collective action has helped the leaders exercise their leadership effectively.

Rajkala Devi, the first-ever woman Sarpanch of Hingwahera Gram Panchayat in Alwar district of Rajasthan, values her Mahila Jagruk Manch. During meetings, women regularly update Rajkala with the needs of the villagers and help her prioritise work. They also find solutions to alcoholism – a pressing local problem. With support from her ward members, Rajkala confidently takes issues forward to the district authorities for action. “Though I am learning to articulate our needs to the district level functionaries, I am very sure of my priorities. I want to focus on roads, pensions, benefits for poor families and education,” says Rajkala Devi.

315 Mahila Jagruk Manches have now been established with elected women leaders like Indrani, Rajkala and Sunita from 635 gram panchayats in Madhya Pradesh, Odisha and Rajasthan. Almost 5,000 elected women representatives and over 17,000 women citizens have discussed public schemes and found ways to address domestic violence during meetings.

In partnership with State Departments of Panchayati Raj and Rural Development, at least 100 Gram Sabhas will be held in each district to discuss development and gender equality with trained motivators and government departments.

On the ground, it is clear that women leaders are capable of bringing crucial change. Be it health, nutrition, education of girls, livelihood or financial independence, they are slowly carving a place for themselves and transforming their identity.

“My journey has just started and there is a long way to go. 40-50 percent of the women are not happy. I want to work for their betterment. First of all, I would like to bring women at the forefront and work towards their development, as well as for the village,” says Sunita Rajawat.

Rajkala, Sunita, Manjulata and Badam Devi are using their positions to transform their villages. They are the changemakers.