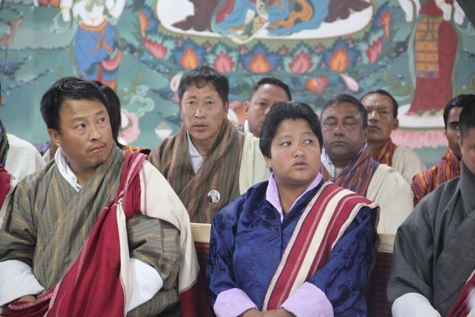 Namgay Peldon is the first woman to be elected as a Gup in Bhutan, ever since the nation went to polls in 2008. The United Nations supports the Government of Bhutan to promote women’s participation in politics and local governance

Thimpu  — UN Women and its Norwegian research partner, Norwegian Institute for Regional and Urban Research, will start work on a Gender Responsive Governance Index at a two-day South Asia conference in Thimphu on 2 and 3 March 2012.

Senior government officials and experts from Bangladesh, Bhutan, India, and Nepal are expected to discuss the development of the index and a virtual Regional Centre for Excellence.

“The construction of new measures must be participatory and reflect the concerns of policy makers and opinion leaders. We want the index to be a practioners tool – it would build on data and  information that is readily available in the field and reflects the concerns of the panchayat. This is not the abstract art of academicians – it is a practical pointer for programmes and progress,” says Suraj Kumar, Head, Governance Programme, UN Women South Asia.

The index will enable panchayats, local leaders and policy makers to remain accountable. Currently under construction, it is expected to measure the extent and quality of women’s participation in local governance meetings and bodies, amongst many other indicators.

“The Index will also build on the experiences of indices such as the Gender Development Index and Gender Empowerment Measure,” adds Suraj Kumar.

A Regional Centre for Excellence

To move with the times, the Regional Centre of Excellence will be a virtual tool that can support elected women representatives across South Asia.

These initiatives are part of UN Women’s programme to promote women’s political leadership and governance in India and South Asia. In Bhutan, UN Women works closely with the United Nations Resident Coordinator’s Office, UNDP and the Royal Government of Bhutan.

In five states of India, UN Women and the Government of India work with over half a million elected women representatives to strengthen their leadership skills and make gram sabhas more responsive to the needs of women. With funding from the Royal Government of Norway, UN Women and its partners will ensure that, in the long-term, elected women representatives have equal influence over political decision- making.