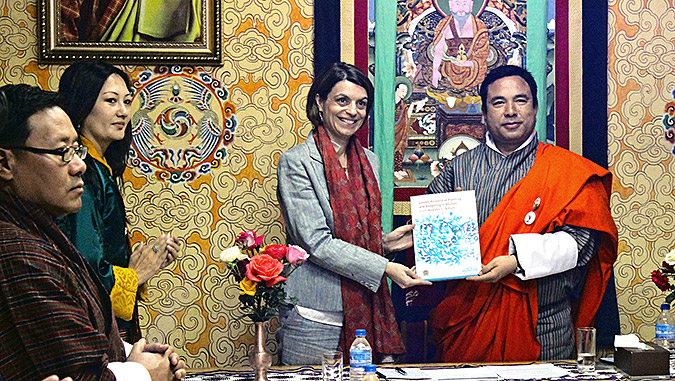 Senior representatives of the Royal Government of Bhutan launched the report Gender Responsive Budgeting in Bhutan: From analysis to action in Thimphu on 11 May 2016. Photo: UN Women

Gender Responsive Planning and Budgeting in Bhutan: From Analysis to Action synthesises the findings from a gender budget analysis of three key sectors – agriculture, education and health. The analysis was also used to build the capacity of government functionaries to apply gender responsive budgeting in their budget policies and outcomes.

Supported by the Asian Development Bank, the report emphasises that gender responsive planning and budgeting is a pragmatic strategy to advance women’s rights. The ‘engendering’ of national plans, policies, institutions and budgets can translate commitments for women into concrete progress on gender equality.

“The Royal Government of Bhutan is committed to addressing the issue of gender equality and women’s empowerment. Gender responsive planning and budgeting is a critical strategy endorsed by the government to ensure that gender concerns are identified and addressed in the planning and budgeting processes,” said Bhutan Finance Minister Lyonpo Namgay Dorji during the report launch.

The full report is available at: Publication section