Radio Chautari: A radio programme for peace and development in Nepal

Kathmandu/New Delhi - A unique radio programme, “Radio Chautari…Where the Conversation begins,” was started after the end of the conflict in Nepal. It has reached more than 18 million people, especially from rural communities, providing them information about peace building, development and socio-economic issues.

Targeting 55 districts, the joint United Nations initiative helped support Nepal’s transitional process towards a more inclusive and just society. These agencies included UN Women, UNICEF, UNDP and UNFPA, and other UN Agencies in Nepal. From April 2009 and September 2011, 112 weekly episodes of Radio Chautari were broadcast from 39 FM stations throughout the country, and translated into six languages – Nepali, Maithili, Awadhi, Tharu, Tamang and Bhojpuri – enabling a wide variety of listeners to understand the programme.

UN Women’s technical and financial support helped produce 25 episodes of Radio Chautari. These episodes focused on women migrant workers, unemployment challenges of the youth, maternal mortality, gender budgeting, trafficking of women and equitable access to justice. In the episode on violence against women, the programme spread awareness about a community service centre for protection to those affected by violence.

Giving space to people in rural areas
In a 2010 survey that interviewed 8000 people, 85 percent were of the opinion that their knowledge on issues such as the peace process, socio, economic and cultural reform had increased considerably.

One of the listeners reported that, “The best thing about Radio Chautari is that it gives space to the people from rural areas. Every week, we got a chance to listen to the problems and concerns of people living in remote areas. It connects the voices of the voiceless people with the policy makers”.

60 percent of the respondents said that they have been encouraged to become involved in various activities related to the transitional process after listening to the programme.

The study also revealed that the radio programme had given them information on five main topics – health, foreign employment, gender equality and the constitution making process. 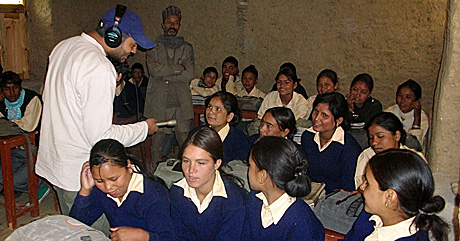 In Nepal, the use of the radio has increased public awareness of women rights. Although the primary target audience for the programme were rural and marginalized communities, Radio Chautari also caught the attention of policy makers and government agencies on issues such as the Comprehensive Peace Accord, Nepal’s Peace and Development Strategy, or the Three Year Plans of the Government.

“By drawing attention to short-term political priorities without losing sight of the longer-term peace-building agenda and by captivating such a significant portion of the Nepali population, Radio Chautari became a success,” explains Sangeeta Thapa, Acting Deputy Representative, UN Women, Nepal.

Capturing the voice of the people
Every week, the team of Radio Chautari travelled to rural and remote areas of Nepal to talk to ordinary Nepalis, and heard their opinions and aspirations on Nepal’s development.

Every week, the agencies of the United Nations worked with the radio team to explore issues for the programme, identify messages, interviewers and districts for field reporting. Experts from the concerned agencies reviewed scripts in English and Nepali to ensure accuracy of the messages.